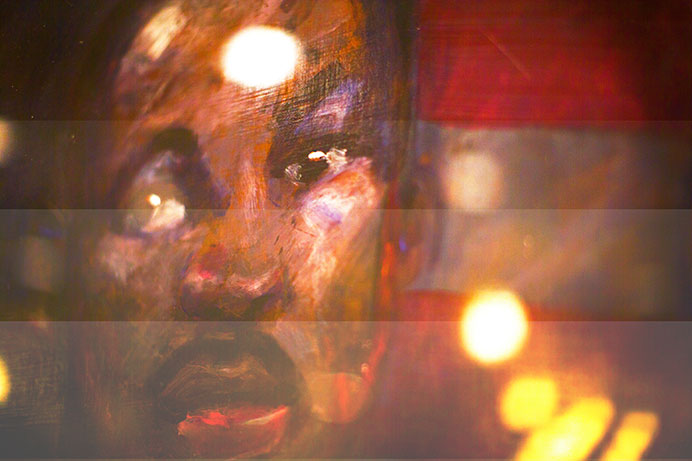 A portait of Martin Luther King Jr. painted by Sam Watkins is shown in the IMU Kendal Gallery on Monday. Watkins will have an interactive painting session of King today in the IMU. (File photo/The Daily Iowan)

In observance of the University of Iowa’s Martin Luther King Jr. Week, a workshop Wednesday addressed overcoming neutrality by confronting white supremacy and racism on campus.

The event, “Why is it always about race? When neutrality is not the answer,” engaged participants on how white supremacy can manifest on a college campus and examined components of racism.

The event place importance on learning to reject neutrality in race-related topics. Participants shared their unique reflections and opinions.

“You have to ask yourself: In what cases have I been neutral and why?” Mercado said.

Nadine Petty, the executive director of the UI Center for Diversity and Enrichment, said it becomes very easy to become complacent.

“It’s very easy to just assume that we’re where we need to be until we remember that although we’ve made progress, we have a really long way to go still as a community and as people in general,” she said.

The presence of white supremacy and racism at the UI was also addressed. Recent public incidents include two neo-Nazi information cards found in the Main Library in April and November 2017 and racist graffiti discovered on two UI residence halls in late August 2017.

Additionally, in 2014, an artistic statue of a KKK figure was erected on the Pentacrest with ensuing controversy.

Overarching problems with racism and discrimination on college campuses in general were examined as a group; a general consensus was agreed upon for the necessity of more student support services in order to support a diverse student population.

Everyone discussed, broke down, and defined a plethora of words including privilege, racism, and oppression. A number of different perspectives and reflections on the matter created a rich dialogue among the participants.

Oppression was loosely defined by the group as a matrix of dominance within social and formal laws. One of the descriptions of racism written on the board was the systematic system of dominance based on white superiority.

Privilege was considered extensively as a term that takes effect in many lives in a variety of ways.

“We are entering the wonderful umbrella of complexity,” Mercado said.

Waad spoke on the ways in which racial oppression operates systematically with sociological terminology. He said the individual, microsystem, mesosystem, exosystem, and macrosystems of oppression affect people and all the levels come together to affect the individual.

“I feel that I learned some very valuable perspectives on racism and how to approach difficult subjects without fearing my own personal involvement,” UI student Olivia Thier said.

Petty said remembering King beyond just this week has more to do with practicing what he preached. She said being courageous and standing up for what’s right is in itself a powerful way to memorialize King going forward.