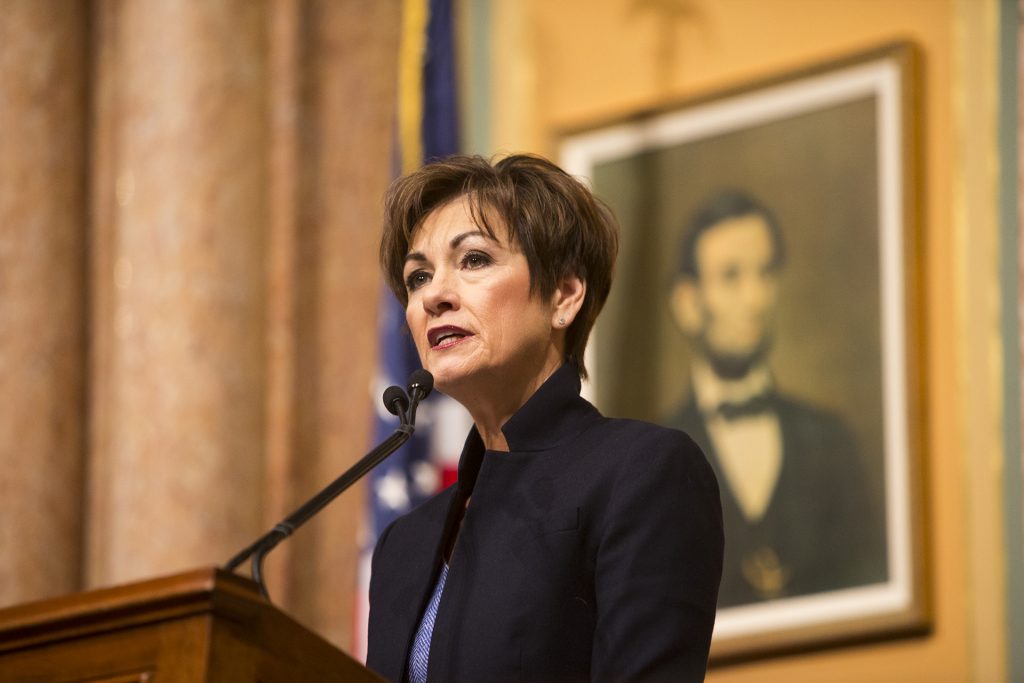 Iowa Gov. Kim Reynolds speaks during her first Condition of the State address in the Iowa State Capitol in Des Moines on Tuesday, Jan. 9, 2018.

DES MOINES — Opportunities abound in the state thanks to hard-working people, Iowa Gov. Kim Reynolds said in her first Condition of the State address on Jan. 9.

Reynolds, the state’s first female governor, took over in May 2017 after then-Gov. Terry Branstad, the longest-serving governor in U.S. history, was confirmed as the U.S. ambassador to China. She used her first address to lay out her priorities for the 2018 legislative session and highlight the tales of average Iowans in the House Chamber of the State Capitol.

The Republican governor has risen through the ranks of state politics, having served as a state senator and lieutenant governor prior to taking over for Branstad. She says she hopes her experience will inspire the people she serves.

“What a country and state we live in, where a small-town girl from rural Iowa can become governor and have the opportunity to serve Iowans at the highest level,” Reynolds said. “I hope that can be an inspiration to every waitress, every grocery checker, every overworked and stressed-out mom, and the little girls who dare to dream. In Iowa, if you’re willing to work for it, those dreams can come true.”

The state’s condition is strong in part because of the 2017 legislative session, which, she contended, helped move Iowa forward and because Iowans’ “discovering and unleashing opportunities” across the state.

“My vision for the future is an Iowa overflowing with opportunity — opportunity for our working families, young people, and our communities, both rural and urban,” Reynolds said. “A place where it doesn’t matter if you’re rich or poor, young or old, male or female. Where your last name and zip code aren’t nearly so important as your ability to dream and willingness to reach for it.”

After Republicans finally gained a federal legislative victory with the passing of the Tax Cuts and Jobs Act in December 2017, Reynolds said, the state will undergo an effort that will likely span numerous years to change Iowa’s tax code.

Before the 2019 legislative session, Reynolds said, she will create a bipartisan task force to analyze every tax credit and provide recommendations.

“Instead of raising wages … Kim Reynolds is bent on spending the majority of our year and our money giving corporate tax breaks to wealthy folks instead of funding the things we care about,” Glasson said.

Success in Iowa’s top priorities depend on the health of the state’s people, Reynolds said.

As Congress struggles to come up with an alternative to the Affordable Care Act, she said, she continues to call upon federal lawmakers to fix it. In the meantime, she said, the state must pass legislation to make health insurance affordable for vulnerable Iowans.
RELATED: Gubernatorial candidates reveal plans to ease Iowa’s mental-health crisis

Mental-health-care efforts in particular are one of Reynolds’ top priorities. She announced an initiative in which new doctors are trained to “identify and treat a patient with a mental-health challenge” through a partnership with Des Moines University and the National Alliance on Mental Illness.

To ensure Iowa’s children are prepared for the workforce, Reynolds said, opportunities for collaboration among businesses and schools will help young people make connections between their education and career paths.

Education must also change with the shifting demands of the workforce, she said, and she proposed $54 million in new funding to support education. Expanding 529 plans to include K-12 education will be part of Reynolds’ tax plan, and she says it demonstrates her commitment to school choice and “offers families the option to teach their values, beliefs, and viewpoints to their children.”

“We also can’t fall into the trap of measuring the quality of our education system by the sheer number of dollars we put into it,” Reynolds said. “If we’re not focused on preparing our young people for the future, then we are failing.”
Click below for more photos