Play from The Combined Efforts unveils the truth of shell shock

Local playwright composes a piece tackling the stigmatization of shell shock, a serious impairment to the brain. 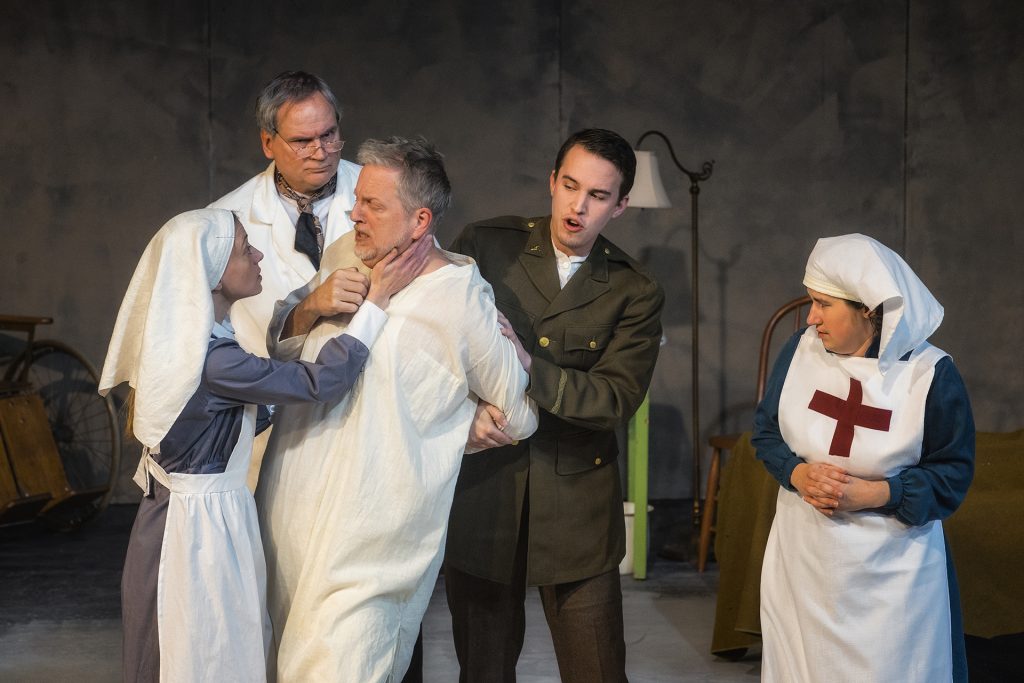 Actors, as medical professionals, help calm a shell-shocked patient during a dress rehearsal for the play Shell Shocked on Wednesday, Dec. 13, 2017. The performance centers on a doctor's search to understand and improve conditions on the Western Front during World War 1. (James Year/The Daily Iowan)

Seven men lie motionless inside a medical unit located in France during the midst of World War I. They have all been wounded in battle.

To uncover the explanation of one soldier’s erratic behavior, several physicians and nurses set off on an expedition in the original play Shell Shocked, opening at the Iowa City Community Theater at 7:30 p.m. Friday at the Johnson County Fairgrounds, 4261 Oak Crest Hill Road S.E.

Throughout the show, the medical professionals develop a deeper understanding of the patient with presumed shell shock, detailing the physical brain impairments along with facing stigmatization from outside sources. The play illustrates how the military was ill-equipped to handle the problem.

The piece was written by playwright Janet Schlapkohl, who was inspired by her great-grandfather, a World War I veteran who suffered from brain injury.

Shell Shocked is a production of Combined Efforts Theater, an arts organization that promotes collaboration between actors with and without disabilities.

Schlapkohl sees huge benefits from having the show produced under the Combined Efforts Theater, believing the diverse actors will add substance to the play.

“I think people knowing their history and playing it is very powerful,” Shchalkohl said. “It gives [the audience] a unique experience.”

Director Rachael Lindhart said she was drawn to the play because of her strong interest in the First World War.

It has a powerful message,” she said. “We’re all the way up the war in Afghanistan and the Iraqi war, and we’re still denying that people get brain damage from just proximity to explosions. The British government covered it up on their end for a long time, but it’s still a terrible issue.”

University of Iowa Associate Professor of physics Kenneth Gayley plays the role of Dr. Hiram Alger, describing him as “the guy who’s putting the pieces together” in terms of understanding the condition.

Gayley said he went out for the show to spread his wings in acting, normally working with comedy. Before, he thought of shell shock simply as an emotional condition.

“This play gave me a kind of a ‘duh’ moment to realize that if NFL players can have brain damage simply from taking heavy hits to the head in a game, then obviously being in the vicinity of exploding shells will be like being hit by an entire football team simultaneously or worse,” Gayley said.

Delving into his character, he said he deeply related to Dr. Alger from a scientific perspective.

“There are people who think the truth is something you can manipulate, you can make it be what you want it to be,” Gayley said. “Alger is on the opposite end of the spectrum. He thinks the whole point of the operation is to find out the truth. The scientific perspective is to go do the best job you can of discovering the truth, even if it’s not something you would like.”

Gayley sees the play as a worthwhile learning experience.

“It never ceases to be relevant,” he said. “Although the weapons have changed, the basic issues of war and the people who fight it doesn’t. Sometimes, their trials and tribulations are not appreciated or well understood. This play looks at a very important way at people who are making a sacrifice.”

Schlapkohl said she hopes several people will donate their time to see a worthwhile performance.

“It’s not about money, it’s about time,” she said. “It’s the idea that you’re willing to give your time and see what [the actors] can do on stage.”