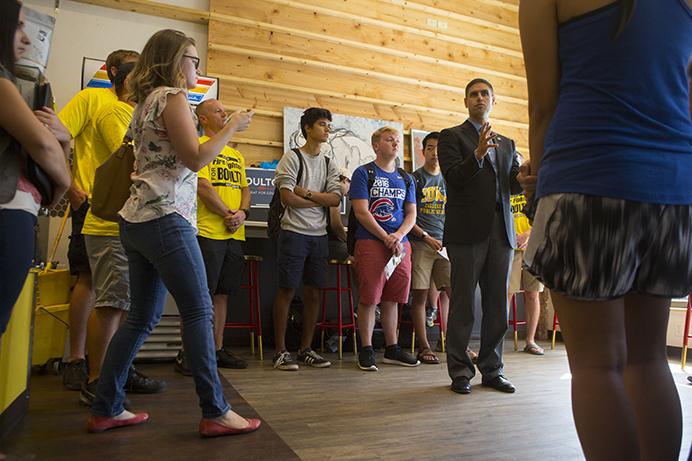 FILE - Nate Boulton (D-Des Moines) speaks at the Hawkeyes for Boulton launch at Cortado on Clinton Street on Wednesday, Aug. 23, 2017. Hawkeyes for Boulton will give students the opportunity to get involved in Boulton's gubernatorial campaign on campus. (Lily Smith/The Daily Iowan)

Iowa is in crisis.

Peggy Huppert, the executive director for the National Alliance on Mental Illness in Iowa, says no continuum of care exists across the state for mental health, allowing thousands to fall through the cracks of an under-supported, piecemeal system. Her organization is a nonprofit mental-health advocacy group based in Des Moines.

Huppert said that approximately 20 percent of Iowans deal with mental-health issues in any given year and Iowa’s mental-health system fails its people.

Democratic candidate for governor Sen. Nate Boulton, D-Des Moines, said closing mental-health facilities needs to be reversed immediately. According to a recently released NAMI IOWA survey, reopening the facilities ranks among one of the top tasks that could be undertaken to stabilize Iowa’s mental-health system. Once these acute-care institutions have been restored, Boulton said, he would work on investing in long-term, sustainable community-care programs.

“It’s time we do something more than just shutting down facilities and ignoring it,” he said.

Republican candidate Ron Corbett, the outgoing mayor of Cedar Rapids, cites these shutdowns as the cause of even further compression of the system. His plan would include increasing the number of available beds by 25 to 50 beds in total and coordinating statewide departments that provide mental-health and substance-abuse services. These adjustments would be financed by a combination of state and local funding as well as reaching out to the private sector.

Republican Gov. Kim Reynolds was unavailable for comment at the time of publication, but in previous statements, she has backed a plan that highlights a regional approach to mental-health services.

“We need to look at an antiquated system and make it better, and we want to do that through the mental-health regions that we put in place so we can do a better job in communities of identifying and providing services locally for Iowans who need it,” Reynolds said in an Oct. 2 press conference.

She has been criticized by her opponents as being slow to express a definitive plan, prioritizing Iowa’s budget over improving the mental-health system.

Democratic candidate for governor Cathy Glasson, the president of the SEIU Local 199 and a Coralville nurse, considers herself as one of the most progressive of the candidates, and much like her fellow candidates, she has become outspoken against the decision to privatize Medicaid across the state. Glasson and Democratic candidate Jon Neiderbach, a former president of the Des Moines School Board, have come up with alternatives that they believe would maintain a cost savings while improving the system.

Glasson said she would introduce a statewide, universal single-payer plan that would include mental-health treatment. Under the plan, the state would pay providers for services and directly negotiate with both providers and pharmaceutical companies to lower overall costs. Any money saved would then be used to readjust the system.

Neiderbach, former management analyst for the Iowa Department of Human Services, said he does not believe Iowa’s mental-health system should be funded by property taxes, as it has been historically. Instead, he said, he wants state government to shoulder the entire cost by taxing cannabis. He pointed to Colorado’s $200 million tax revenue post-legalization of marijuana as evidence that the tax could potentially generate the same amount for Iowa and be used for mental-health services and substance-abuse treatment.

Several candidates, including Democratic candidate John Norris, a co-owner of the State Public Policy Group, have listed the privatization of Medicaid as a large reason that there is a severe shortage of mental-health professionals across the state.

A 2016 report compiled by the Treatment Advocacy Center, a Virginia-based national nonprofit that works to improve mental-health care, ranked Iowa 47th when it comes to the number of practicing psychiatrists per capita. Norris said Iowa’s current system under-reimburses mental-health providers, driving them away from Iowa; he said he wants to end privatized Medicaid and have funding managed at the state level by an oversight committee to encourage more providers to practice in the state.

“This is not a problem that’s going to be solved with your typical board or commission,” Norris said. “We need to convene experts to develop a strategy and a plan that will be implemented across all regions with oversights, and then we empower the regions to set up [mental-health property-tax] levy rates that they know need to be met to cover the services for community-based care.”

Democratic candidate Ross Wilburn, an associate program director at Iowa State University and former mayor of Iowa City, said Medicaid privatization should be reversed, and he would rather encourage providers to remain in through loan forgiveness and other incentives. These programs would offer grants and various forms of financial aid for mental-health professionals who choose to serve in Iowa for two to three years after completing their degrees, with a special focus given to chronically understaffed rural areas. Wilburn said he would also increase the number of beds available across the state and invest in mobile crisis units to improve accessibility to care.

NAMI’s Huppert also identified the overlaps between mental-health services and the criminal-justice system as an area in need of improvement.

“About 50 percent of people incarcerated now, both men and women, have mental-health diagnoses, and so Iowa’s jails and prisons have become the mental-health provider of last resort, and that is unfortunate,” she said. She said a large portion of these individuals are low-level, high-frequency offenders, often booked for relatively minor offenses, such as public intoxication or trespassing.

Steven Ray, Boone city councilor and Republican candidate, said that when these individuals are placed in jails rather than in community-based care networks, they put an unnecessary burden on local authorities.

“I really feel for our county sheriffs in this state, because this really severely impacts their budget because they’re the ones that are dealing with court-ordered committals and trying to find places for people for beds …” Ray said.

In order to help ease the burden on local governments, Ray said, he would work toward creating regional inpatient/outpatient facilities and coordinating directly with the communities they would be placed in. The facilities and other portions of his plan would be funded by a combination of raising the mental-health levy in each county and reassessing corporate tax breaks.

Democratic candidate Fred Hubbell, a retired insurance executive from Equitable Life Insurance of Iowa, said his plan for dealing with mental health would include working with local officials to form jail-diversion programs, which are meant to reduce recidivism rates among those with mental-health illnesses by placing them in multilevel community-care networks. These networks would include beds at varying levels of intensive care, from 23-hour temporary beds to 90-day beds in crisis-restoration centers, all meant to help get people back on their feet. He would also add 60 to 75 acute long-term-care beds across the state.

Hubbell pointed to Johnson County’s jail-diversion program as a successful example of the kind of model he would like to see across the state. The programs can make a large difference in how much counties have to spend on maintaining inmates. Jessica Peckover, the jail-alternatives coordinator for Johnson County, said that in just 2017, the county saved approximately $2.7 million by having the program in place. Hubbell would recirculate these funds and put them toward restructuring mental-health and substance-abuse services across the state.

In her plan, Democratic candidate Andy McGuire, a former chairwoman of the Iowa Democratic Party, focuses on expanding and emphasizing mental-health care for teenagers and children. The plan would allot funding for trained mental-health and substance-abuse coordinators in every school district, where they would work with existing staff to treat Iowa’s youth. She said she also would increase training for educators to increase recognition and response to those showing signs of potential problems.

In order to fund this training, as well as other parts of her plan, McGuire said, she would work with the state attorney general to sue prescription opioid makers — which, she said, have caused an epidemic of drug abuse. Any funds won in these suits would be funneled toward improving Iowa’s mental-health system, she said.