President Trump has an everlasting vendetta against Native Americans. 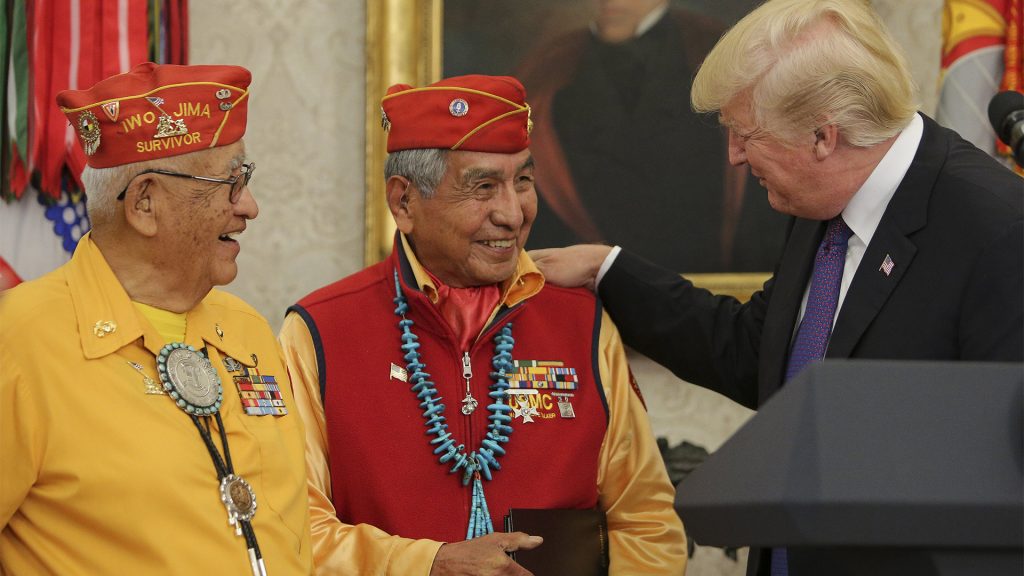 President Donald Trump greets members of the Native American code talkers on Nov. 27, 2017 during an event in the Oval Office of the White House in Washington, D.C. (Oliver Contreras/Pool/Sipa USA/Abaca Press/TNS)

President Trump’s bias against Native Americans rang true well before he was in office, but his actions as president reflect repeated dehumanization of this population. In 1993, Trump stated before a House subcommittee that the operators of Native Americans “don’t look like Indians.” Those comments previewed his presidency; after pushing through the Dakota Access Pipeline, which trespasses on Native American land and taints indigenous lives and water, Trump worked to resurrect the Keystone XL Pipeline.

It would be no shocker to say that the latter pipeline has already leaked into local lands and has harmed Native lands.

Even more recently, Trump believed it would be nothing more but ideal to thank three Navajo Code Talkers in front of a portrait of former President Andrew Jackson, who signed the Indian Removal Act. And of course, Trump couldn’t resist making a joke about Elizabeth Warren, calling her “Pocahontas.”

Let’s not forget the most recent manifestation of Trump’s vendetta: his administration substantially shrinking two Utah National Monuments: Grand Staircase-Escalante and Bears Ears. With the support of the Republican congressional delegation of Utah, President Trump was granted their support and approval to change 10 areas to establish more development and extractive industries. In a video call, Sen. Orrin Hatch, R-Utah, stated that the outcome of the deal will “strike an excellent balance where everybody wins.”

The real question here, however, is who truly wins?

The answer is obvious, the 1 percent in Washington.

While the 1 percent gain land to conduct developmental projects, the Native American population loses sacred land in which money cannot begin to amount to in value. Native Americans expressed their concerns for the future of their tribes and status in the U.S.; Trump’s actions have done nothing but directly attack Native American tribes.

Considering the U.S. president is supposed to be the physical embodiment of the values and morals we are supposed to uphold, it almost seems as if it’s a staple of the American people to blatantly disrespect the Native American population.