A talk with astronaut Peggy Whitson 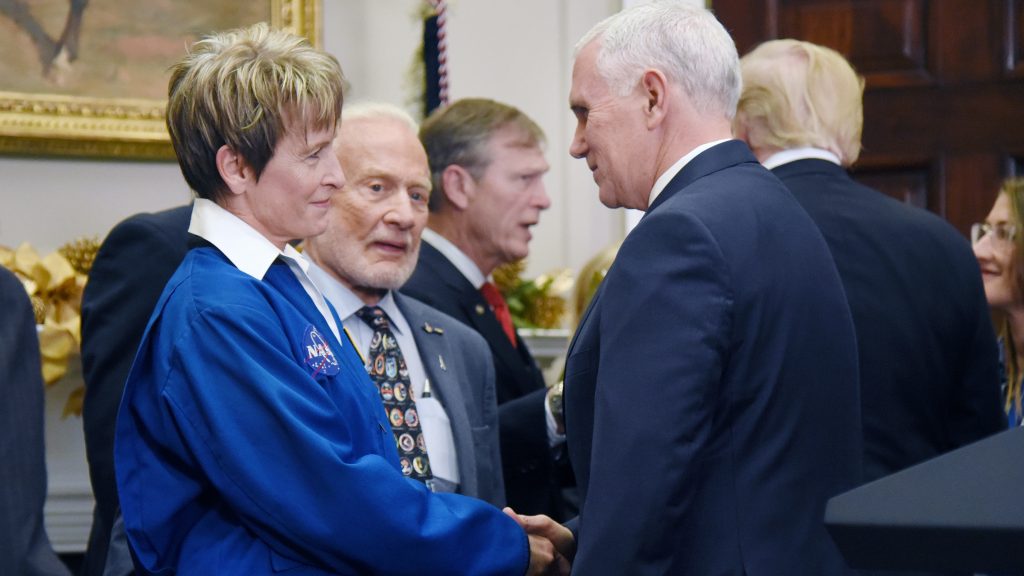 U.S. Vice President Mike Pence shakes hands with NASA astronaut Peggy Whitson, left, as former astronaut Buzz Aldrin looks on after a signing ceremony reinstating the National Space Council with the goal of sending American astronauts back to deep space during an event on Monday, Dec. 11, 2017 in the Roosevelt Room of the White House in Washington, D.C. (Olivier Douliery/Abaca Press/TNS)

Astronaut Peggy Whitson holds the record for longest time spent in space for any astronaut in The United States and any Woman in the world.
By Rhiana Chickering
[email protected]

Almost two years in space is how much time one Iowa native has spent in her astronaut career.

Throughout her career, Peggy Whitson completed 10 spacewalks. With a career total of 665 days spent in space, Whitson holds the record of the most time spent in space.

This is longer than any astronaut in America and longer than any other woman in the world. The record is listed with countless others on NASA’s website, acknowledging just how much Whitson has accomplished during her career.

“I have had a lot of opportunities,” Whitson said. “It is very special to represent the fact that women are in space, and I’m proud to be that representative.”

She said she has always challenged herself to live outside of her comfort zone and accept jobs that allowed her to embrace challenges. She said she first wanted to become an astronaut when she was 9 and witnessed Neil Armstrong and Buzz Aldrin walk on the Moon.

“But when you’re 9, you want to be lots of things,” she said. “When I graduated high school, though, that was when they picked the first female astronaut, and that was when it made it seem real and achievable — something I could make a goal, so that’s when I was really inspired to become an astronaut.”

As she aspired to become an astronaut, Whitson now considers it lucky that she did not know how extremely difficult it is to become one. She said that she may have been discouraged had she known.

After completing her undergraduate and graduate work in biochemistry, she began working for NASA as a research scientist.

“I was researching epithelial cell structures and how that might be impacted in the fluid shed, which is what occurs in the human body during the space flight,” Whitson said. “Then, I began studying kidney stones in astronauts because bones demineralize very rapidly on orbit, and we wanted to understand if that was going to increase the risk of forming kidney stones while astronauts were in space.”

During Whitson’s time as a researcher for NASA, she had several scientific opportunities to work with the agency’s international partners. After 10 years of applying to become an astronaut, Whitson was selected to work with a crew at the International Space Station.

An average day as an astronaut includes a plethora of diverse responsibilities, but Whitson said that is exactly what she likes about the career.

Every day on orbit, she and her team also exercised about two-and-a-half hours, completing resistive exercises to prevent the loss of bone density and muscle mass that astronauts lose if they do not exercise a lot. For cardio-vascular exercises, Whitson said, they were often harnessed on the treadmill as they ran because of the lack of gravity.

“The most novel part is being in an environment where there is no gravity,” Whitson said. “Everything you know, everything you’ve lived is all based on the fact that there is gravity pulling on you all the time … learning to … really live in an environment that is so completely different without that gravity … is the most novel part about being in space.”

As one can imagine, the view is also spectacular.

“The view while you’re out there working is absolutely amazing,” Whitson exclaims. “Not only do you have this amazing football-field sized structure that we built up in orbit traveling at about 17,500 mph — we built it while going that fast — while piecing parts that were sent up … but when you look down to see our beautiful, beautiful planet below, it just gets so spectacular. It seems to me that the colors seem richer like they have more texture — it’s a very impressive time.”