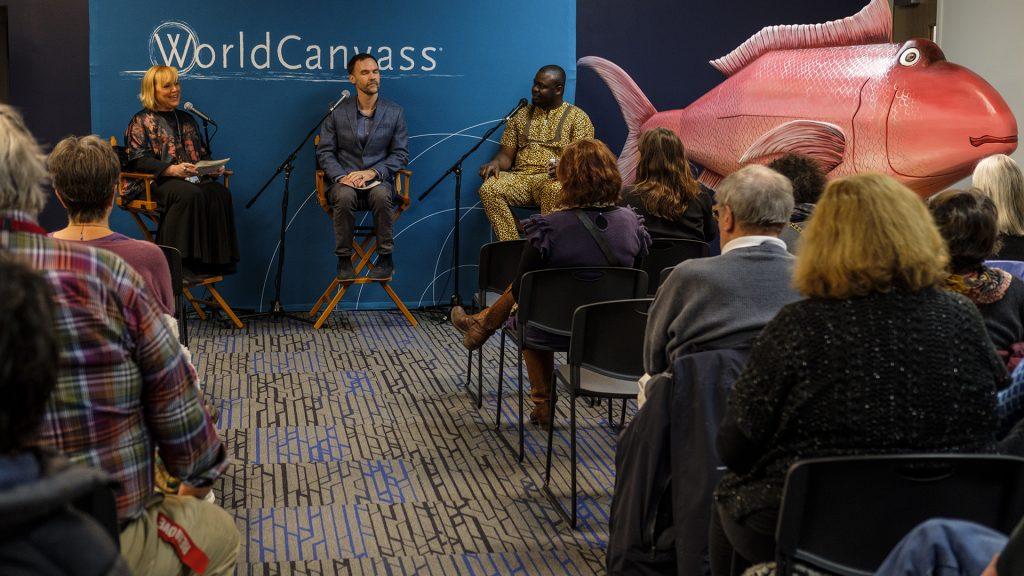 The first contemporary African artist to have a solo exhibition with the UI Museum of Art was featured at the WorldCanvass’ “Art & the Afterlife” discussion on Thursday at MERGE.

The coffin at the front of the room was shaped like a giant red snapper, with a bubblegum-pink body and silver paint outlining the scales. The top fin goes over the opening, and a large eye stares out over the crowd.

This is only one of many fantasy coffins created by contemporary African artist Eric Adjetey Anang. He has spent the fall semester at the UI Museum of Art as an artist-in-residence, and five of his pieces are being shown in the IMU Black Box Theater.

The first of three panels featured Anang and Cory Gundlach, curator of the arts of Africa, Oceania, and the Americas at the Art Museum, who talked about African contemporary art and the works featured in the museum.

“My interest in particular was to bring in a young artist that’s making things today that could be a part of the project, and to have his voice as part of this opportunity,” Gundlach said.

Gundlach also talked about how a lot of Anang’s pieces featured in galleries and exhibits have ties to real-world problems, like a hanging fish coffin with plastic in its mouth representing the pollution in the ocean.

Anang’s profession in Ghana as a coffin-maker is one he learned from his father and grandfather, who was a leader in the field. He came to own the workshop in 2005 and now works with apprentices to build coffins that mean something to the deceased and those close to them.

“In this part of Ghana, we celebrate our deceased relatives,” he said. “it’s a form of giving them a proper burial.”

The second panel featured Christopher Roy and Isabel Barbuzza, professors in the School of Art and Art History. Anang worked with students in Barbuzza’s sculpture class this semester and even helped a student build a coffin in the shape of a boat that they put on the pond by the Art Building.

“I like to work with students because it’s the only way that I can learn from them,” Anang said.

Anang doesn’t use any form of computer technology to design his pieces, instead picturing the design in the space and using hand tools to create it.

“What a wonderful experience for my students to see what you can accomplish with hand tools and really thinking about … three-dimensional intelligence,” Barbuzza said.

She noted that Anang taught them so much more than just woodworking, he taught them about different cultures and being a global artist.

“What we took away from that experience was not only the techniques we learned but also the experience … his take on being an artist, what it means to be an artist in the world,” Barbuzza said.

Anang also spoke about his different titles as coffin-maker and artist, and how in America he is known as a contemporary African artist, but at home he has had to work hard to be recognized as more than just a coffin-maker.

“I really have a very huge connection back home, and I don’t only want to limit myself to only making coffins, but also being in the classroom to share everything with the kids,” he said.