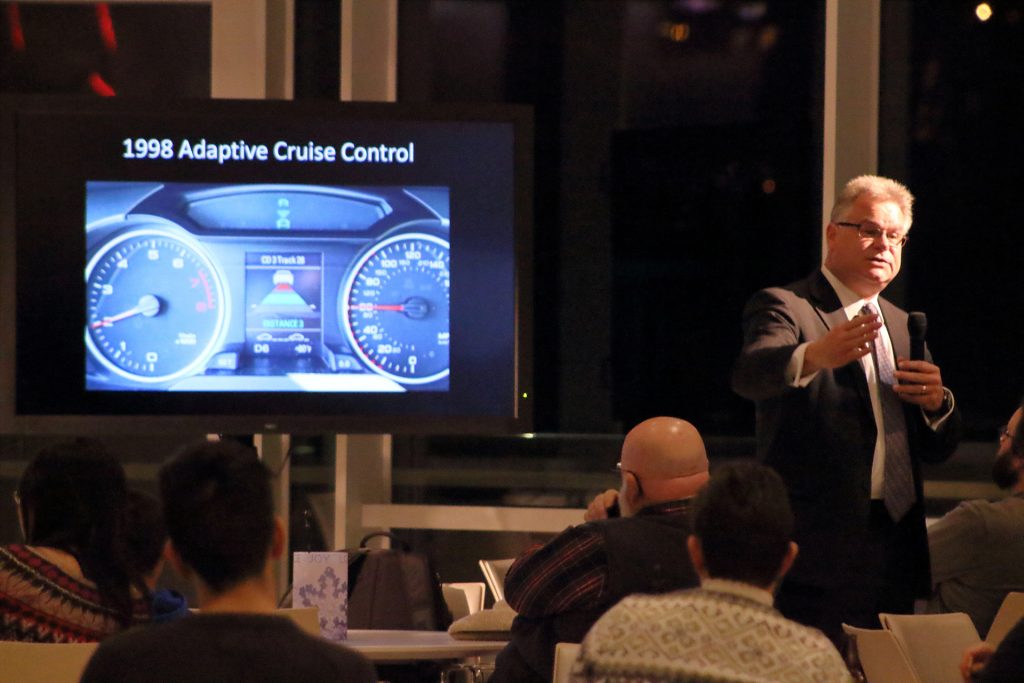 Dan McGehee speaking at the Stanley Cafe in Hancher Auditorium on Thursday, Dec, 7, 2017. The presentation discussed the advancements in automated driving made here at the University of Iowa. (Ashley Morris/The Daily Iowan)

When people think of the University of Iowa, they may think of the Old Capitol, its renowned writing programs, and, of course, the Hawkeyes.

What many people might not think of is the world’s largest driving simulator, an $80 million piece of equipment resembling a small white spaceship and takes up a room the size of a basketball court.

The facility is housed in the National Advanced Driving Simulator Laboratories at the UI Research Park, and it’s employed in helping the university pioneer the future of automated driving.

A Science on Tap discussion at Hancher on Thursday evening brought the UI’s past and present research on automated driving to the forefront.

Science on Tap takes place on campuses across the country; it gives researchers an opportunity to share their work with the public. Aaron Kline, the research development coordinator in the UI Research Administration, brought to the idea to university earlier this year.

“It’s a topic the community is interested in, it’s timely, and it’s research that’s happening here at the university,” Kline said.

Hancher Director Chuck Swanson said hosting the program at Hancher is great way to mix science with the arts.

“What a wonderful way to show the community what this university is all about,” he said.

The event featured speaker Daniel McGehee, the director of the driving-simulator labs and an associate professor of mechanical and industrial engineering, emergency medicine, public health, and public policy.

“People don’t know this is one of the central hubs of advanced automotive research in the country and even around the world,” he said.

McGehee said most of the automated technologies seen in vehicles today have come through the UI, either during development, for government testing, or testing for the industry.

“Even the technology you see in relatively inexpensive vehicles, whether that’s adaptive cruise control or lane-departure warnings, have come through the UI at one point or another,” he said.

McGehee also noted that one of the central things automated-driving research looks into is reducing driver error, which contributes to 95 percent of crashes.

The laboratory is working with the Department of Transportation and a company in Chicago called HERE to develop high-definition maps of the Iowa City area. Researchers have narrowed the location accuracy from plus or minus 1 meter to plus or minus 7 centimeters; this additional resolution in a car, in combination with the car’s sensors, helps it “see” better.

“In the next six months, we’ll have a vehicle capable of driving itself, and we’ll supervise it heavily as part of our testing of that high-definition mapping,” McGehee said.

The testing of these technologies is where the simulator comes into play, inside of which sits a life-size car surrounded by screens for a 360-degree view, made possibly by the high-resolution projectors. This, combined with movements that mimic the real motions of driving and three-dimensional sound, create a very real driving experience.

Students from UI Colleges such as Engineering and Public Health and the Psychology Department work in the lab to better understand driving behavior and how it can be automated, though, McGehee said, fully automated vehicles are still many years out for regular public roads.

“Driving simulation has been one of the crown jewels of the UI for more than 25 years,” McGehee said. “Our motto is to detect and to swerve.”