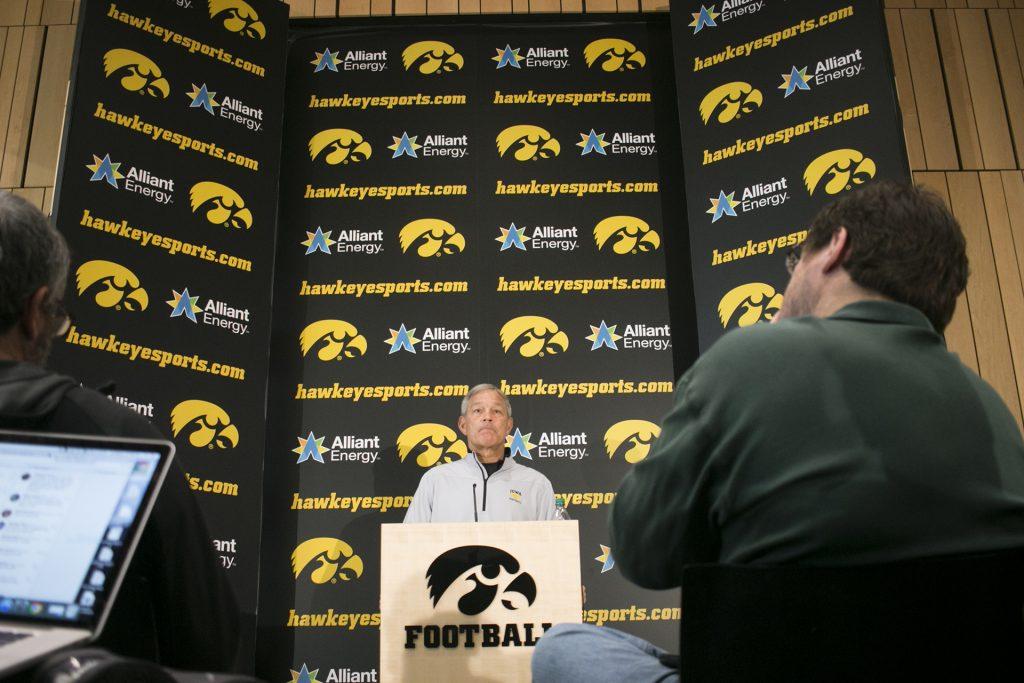 Iowa head coach Kirk Ferentz speaks with members of the media during a media availability in the Hansen Football Performance Center on Sunday, Dec. 3, 2017. The Hawkeyes accepted an invitation to play Boston College at the New Era Pinstripe Bowl in New York City on Wednesday, Dec. 27. (Joseph Cress/The Daily Iowan)

The Iowa football team will head to New York City to take on Boston College in the Pinstripe Bowl.

The Iowa football program made it pretty clear that its bowl game preference would have been Nashville.

That’s not where the team is headed, though.

Instead, the Hawkeyes will take a bite of the Big Apple at the end of the month when they take part in the Pinstripe Bowl at Yankee Stadium. The announcement came out Sunday afternoon that Iowa and Boston College were the two teams selected by the Pinstripe Bowl committee.

Though no one voiced discontent, it did not seem like many were exactly excited about the choice.

“At the end of the day, hopefully our fans know, it’s not a selection process by the university to the bowls,” Iowa Athletics Director Gary Barta said. “[We] are gracious to accept whatever bowl we’re invited to.”

Nearly all bowl-game projections had Iowa heading to the Music City Bowl in Nashville, but Wisconsin’s loss to Ohio State bumped the Badgers out of College Football Playoff contention and shook things up among Big Ten bowls.

There was a possibility that Ohio State could have instead been the team to replace Wisconsin in the Playoff, but it was, after all, Iowa that had an effect on the choice to leave the Buckeyes out.

Not having a Big Ten team in the Playoff opened up more options for the Music City Bowl, which selected before the Pinstripe. Officials went with 9-3 Northwestern, which defeated Iowa in overtime in October.

Barta said he did what he could to persuade Music City Bowl officials that Iowa is a good fit for Nashville, but it wasn’t enough.

“I talked about Iowa versus Northwestern. I talked about the fact that, you know, they beat us in overtime, but consider the wins that we had,” Barta said. “Also, our fan base, our television ratings, and I shared all that with the bowl in Nashville.”

While Iowa did not get the spot in the bowl that many were hoping for, it should be a good trip for the Hawkeyes and fans.

Many of the players have not been to the city. One who has, though, is Akrum Wadley, who grew up about a half an hour from Yankee Stadium.

Ferentz joked the thought of having Wadley be the team’s tour guide was “a little frightening.”

Wadley said it will be nice to play a game in front of his whole family.

“It’s probably the second game all my family will be able to go to. They went to the Rutgers game,” Wadley said. “I feel like it’s a real special opportunity. A lot of my family, my aunts and some of my uncles, they don’t like to fly … I know they’ll all be there for the game.”

The Hawkeyes have never played a bowl game in New York City, let alone on a baseball field. It is also the first time for Iowa and Boston College to face off in football.

Coming into the game with a 7-5 record like the Hawkeyes, the Eagles also boast former Iowa linebacker coach Jim Reid as their defensive coordinator.

Reid coached at Iowa from 2013-15, and linebacker Ben Niemann said it will be nice to get to see him for the first time since he left.

“He’s just a really passionate coach. He came in with a positive mindset every day, pushing us to be great players,” Niemann said. “He’s a passionate guy. He’s someone who would come help you out at 2 in the morning if he needed to. He’d drop anything for his guys.”

Who: Iowa vs. Boston College