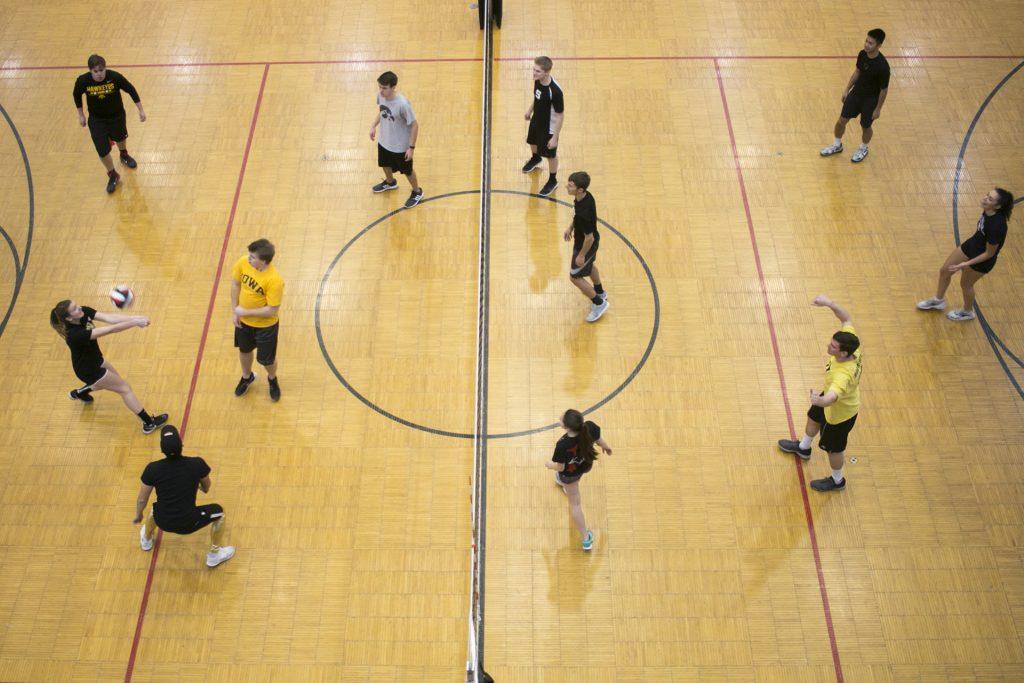 University of Iowa students play a charity game of volleyball in the Field House on Sunday, Dec. 3, 2017. The money raised from the event is going to go towards building water wells in other countries. (Joseph Cress/The Daily Iowan)

Students took to the volleyball court to help beat the global water crisis on Sunday at the Field House.

The Hawkeye Water to Thrive put on a volleyball tournament to raise money to help people in rural Africa get clean water. Each team paid $30 to play, and prizes were awarded to the winning team. Twenty teams participated, and $600 was raised. Teams were also encouraged to get into the holiday spirit and wear ugly Christmas sweaters.

“Our purpose is spreading awareness about the global water crisis, showing people that this is a big deal,” Hawkeye Water to Thrive President Sam Ellis said. “Families, women, and children are all affected by this all over the world.”

Team Greasy Boys won the day, beating Mission Unblockable in one game to 21. The prizes it won included a $20 Panchero’s gift card and Water to Thrive merchandise.

Saleh and the other members of the Greasy Boys play club volleyball together.

“Last year, we did the dodge-ball tournament, and we thought that was really successful, so we thought we would change it up just a little bit and do a volleyball tournament,” group Vice President Gretta Hingl said.

RELATED: Seeking the water of life for the world’s people

The food fundraisers the organization has held have been fairly successful, but Ellis said the activity-based events draw a larger crowd and are more fun for everyone.

The money the organization raised in the volleyball tournament and other events will go towards building a well in a rural African community so the people who live there will have easy access to clean water. Water to Thrive, the national organization, has built wells in Ethiopia and Tanzania in the past.

Because the organization is national, the UI chapter will send the money it has raised all semester to the main base in Texas, where they will dedicate it to a project in sub-Saharan Africa.

If the members raise $5,000, the amount needed to build a well, they will have a project dedicated to them. If the organization raises less than that, the funds will be pooled with other chapters toward a project. After the money is sent in, they will get information about the project, such as location of the well and news about the community that it will help, Hingl said.

Ellis noted that having clean and accessible water won’t just help with disease. Women and children spend a large amount of time just getting water from the nearest source, which leaves no room for work or school. With a well, they would have more opportunities for education and jobs.