The downtown Iowa City Hilton Garden Inn celebrated its grand opening with a ribbon-cutting ceremony, room tours, and a party with speakers. 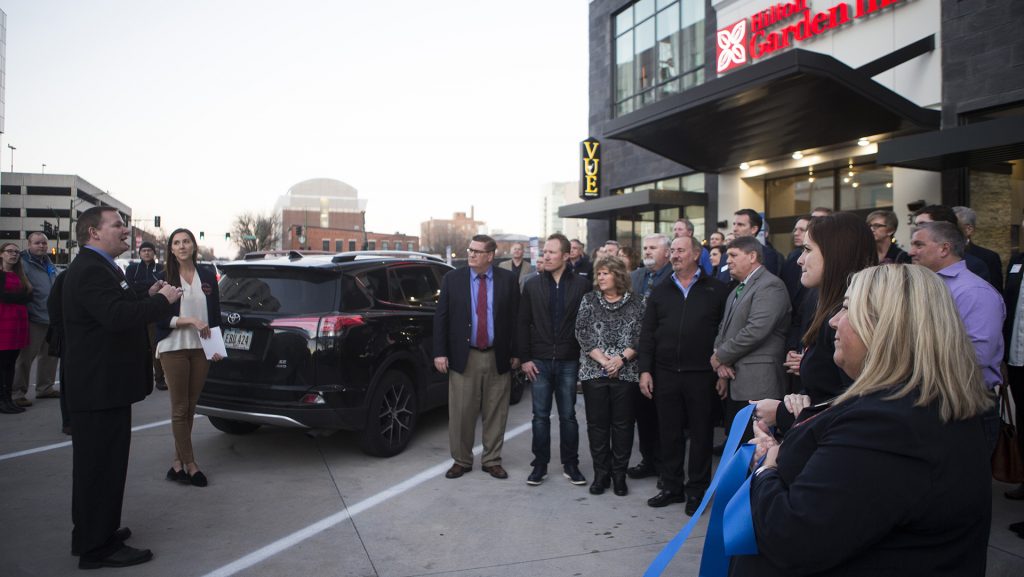 Hilton Garden Inn general manager Neil Roth speaks to guests during a ribbon cutting event for the Hilton Garden Inn on Clinton Street on Thursday, Nov., 30, 2017. The 12th floor of the hotel features a rooftop bar and restaurant that is open to the public. The hotel opened in October. (Joseph Cress/The Daily Iowan)

With the cutting of a ribbon, the downtown Hilton Garden Inn celebrated its grand opening on Nov. 30.

The new hotel, which opened for business in October, celebrated with room tours and a party with guest speakers. A champagne fountain and hors d’oeuvres were featured, and smooth music floated over the room of mingling guests.

The rooms open to the public were filled with afternoon sunlight that came through large windows, showcasing the Iowa City skyline. In the evening, the lights from downtown twinkled like stars.

An average of 80 rooms are booked every night in the hotel, general manager Neal Roth said. Vue Rooftop, a restaurant and bar that takes up the top floor of the hotel, serves an average of 130 guests per night.

The restaurant is sleek and modern, with overhead lights that can change color with the beat of a song. Outdoor seating is also available, and during the event the bar housed a beautiful ice sculpture. The bartender could pour a drink onto the sculpture, and it would run down into a waiting glass.

“That’s one of the little things we’re trying to do with Vue Rooftop, bring an experience,” Roth said. “There’s already a lot of experience you can have with the Iowa City downtown nightlife, and we’re very happy to be a part of it, and we think the rooftop is a very nice addition to it.”

The restaurant also offers a private room with its own bar that can be rented for business or social events. Live music is sometimes present, and a jazz group and a DJ have been featured so far.

Many people spoke at the event, including Roth, Mayor Jim Throgmorton, and Downtown District Executive Director Nancy Bird. Both city officials expressed their pleasure with the hotel’s success, and Bird noted that the new facility helps make downtown a more exciting place for visitors and residents.

RELATED: A room with a Vue for Iowa City

“It’s the first major hotel south of Burlington, and that will help people rethink what downtown Iowa City really is,” Bird said. “We’re thrilled about the entire project.”

Throgmorton said the hotel is a large part of a growing community and is a step in the right direction for making downtown even better than it already is.

“[Downtown] is clearly transforming before our eyes literally as we speak, and it’s dramatically different from it was just three years ago and will be much different as time goes on,” Throgmorton said.

The Hilton Garden Inn will soon have another hotel as its neighbor, Roth said. A $40 million project will break ground in the next 30 days next to the hotel, and an Element Hotel and condominiums will be built. Roth noted that the Element Hotel will allow guests to earn Marriott Rewards points, which will draw in more business.

“I think the community has welcomed us with open arms, and I’m very excited to be a part of it,” Roth said.