Six non-native Iowans gathered at the Iowa Writers’ House to tell the story of how and why they chose Iowa as home. 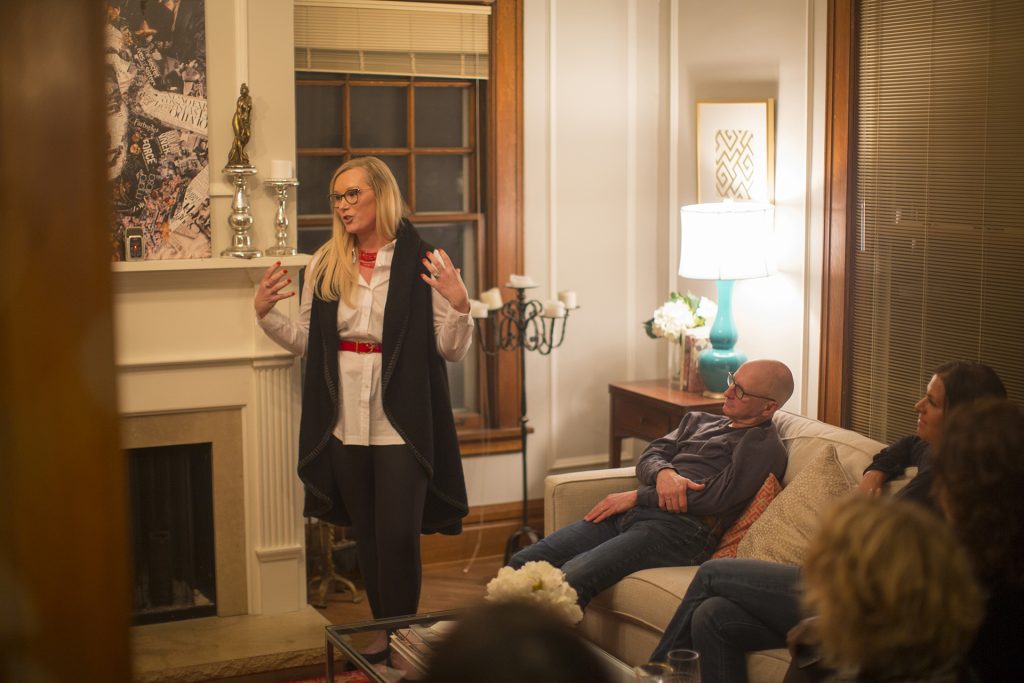 UI grad Daphne Patton speaks during the Iowa, My Second Home: True Stories from the Heartland event at the Iowa Writer's Workshop on Thursday, Nov. 30, 2017. The event was hosted by IowaWatch. (Lily Smith/The Daily Iowan)

For Iowa natives, the answer might be because they were born here, raised here, and have family (or farmland) here.

But what about non-natives, people who were not born in Iowa but chose to make it their home? What draws them to choose Iowa as their permanent settlement when their roots originate elsewhere?

This was the topic explored in a storytelling event hosted at the Iowa Writers’ House on Nov. 30 as a fundraiser for the House and IowaWatch.

IowaWatch Executive Director Lyle Muller said the event was aimed at authentic storytelling and enabling people who don’t identify as writers to share their tales. Muller is a politics coach for *The Daily Iowan*.

“Iowa City is not necessarily Iowa — there’s an Iowa out there that’s different from here,” Muller said. “This topic appealed to me because I’ve heard a lot about Iowa from people who moved here that we as natives take for granted. Even Iowa natives can learn something about Iowa from the people who view us so favorably that they chose to live here.”

The first speaker, Patton, was born in Rome; her dream to visit a small Iowa town was born when she was a 16-year-old Chicago resident watching the movie Children of the Corn.

Fast-forward several years, and she was visiting the UI campus; though it wasn’t the tiny town she’d imagined, she loved its vibrancy, architecture, diversity, and political charge. Soon, she joined the rowing team and eventually worked for the university as a rock-climbing instructor, where she met the man she later married.

She and her husband rented out their Iowa City home and spent a year traveling the Western U.S., but they continued to be drawn back to Iowa.

“Iowa is the Heartland,” Patton said. “Everywhere we went, the best people we met had Iowa roots.”

Patton and her husband moved back “home,” and now live in North Liberty with their three kids and three dogs. She works as a real-estate agent.

Jim Jacobson, who was born in Brooklyn, New York, and obtained a master’s at the UI after a brief (“failed”) stint in Hollywood as a screenwriter, shared a similar story. From living in California to Iowa City to Massachusetts, Jacobson had his fair share of moves as he explored different career paths, there was one place that always seemed like home to him: Iowa.

“My wife, Irene, and I both said, ‘Let’s go home,’ and I knew what she meant,” Jacobson said. “She didn’t mean three hours down the interstate in Brooklyn, where I spent my childhood. She meant Iowa, where I truly grew up.”

Talley, a Columbus, Ohio, native who works in the Iowa fashion industry, admitted he never thought he would end up in Iowa, but the sense of community drew him in and, after traveling the country working for the Obama campaign, he decided to return to Iowa to finish his degree.

“I never felt that sense of connectedness, community, and belonging in Columbus,” Talley said. “In just my brief stint in Iowa working for the campaign, I got the sense that it was a community where I could plug in, belong, and add value.”

Talley also stressed the importance not only of his story but of the Iowans who make this state the special place it is, a place he chose to call home.