Iowa volleyball winds up one step closer to goal 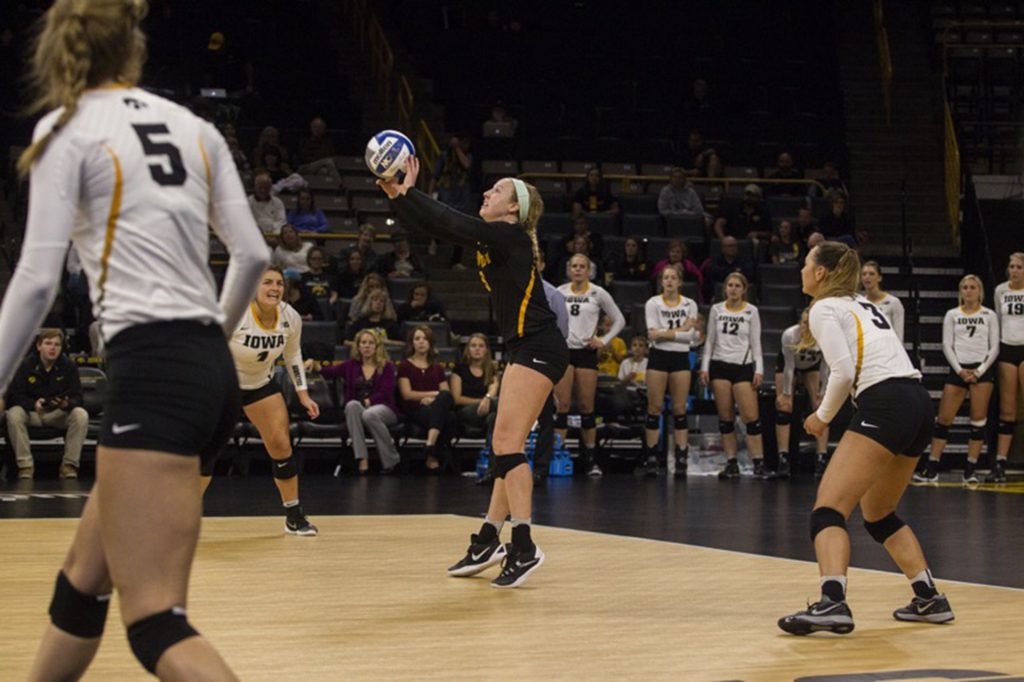 FILE - Iowa's No. 9 Annika Olsen receives the ball during a volleyball match at the Carver Hawkeye Arena in Iowa City on Friday, Oct 7, 2016. Iowa defeated Purdue 3-2. (The Daily Iowan/file)

The Iowa volleyball team’s season ended when it wasn’t given a bid to the NCAA Tournament, but the steady development of the program has produced a lot to be proud of.

“I think the progress has been obvious, it’s been remarkable at times, but it’s been slow and steady at other times,” head coach Bond Shymansky said. “There’s no doubt that we had a lot of work to do to get it to this point. The first year coming in, we were high 100s RPI, and we’ve kind of chipped away each year. Last year, I think we finished in the 70s. This year, we’re right there at 50 and on the bubble.”

Since Shymansky took over as head coach four years ago, the program has seen consistent improvement, and each year has inched closer to making the NCAA Tournament.

RELATED: V-ball gets must-win but loses 3 of 4

Annika Olsen and Jess Janota, two seniors who received All-Big Ten honors, were instrumental in bringing the program to what it is today.

“I think they worked really hard to build our program to the position that it’s in now, and I think they’ll look back and be proud of the step forward we’ve taken and know that they were a huge part of that,” Shymansky said.

Despite falling short of the overall team goal twice in a row, Olsen realizes the effect that she and the entire senior class has had in putting the Iowa volleyball program on the map.

“When I first got here, the thought of making the NCAA Tournament was not really in the picture. Obviously, we didn’t make it this year, but we were so, so close,” she said. “Even though that’s hard, it was still so cool to bring the program to a place where we’re expecting to make the tournament and disappointed if we don’t.”

Iowa plays in one of the toughest volleyball conferences in the nation, so the improvement is judged more on how it battled against top opponents rather than its victory total.

The Hawkeyes faced off against nine top-10 teams in the country, eight from the Big Ten.

One big moment for the Hawkeyes was when they took a set off of then-No. 2 Penn State for the first time since 2012.

“Being a Hawkeye has been a once-in-a-lifetime experience, and it’s really been amazing,” Olsen said. “Obviously, there [have] been ups and downs, just because like playing the Big Ten is hard, but it’s been so rewarding and so worth it.”

Throughout Shymansky’s tenure as head coach, he has worked to engrain a new culture into the program.

“True mental toughness” is something that he teaches every day, working hard and mentally overcoming any circumstance that is thrown at the players, both individually and on a team level.