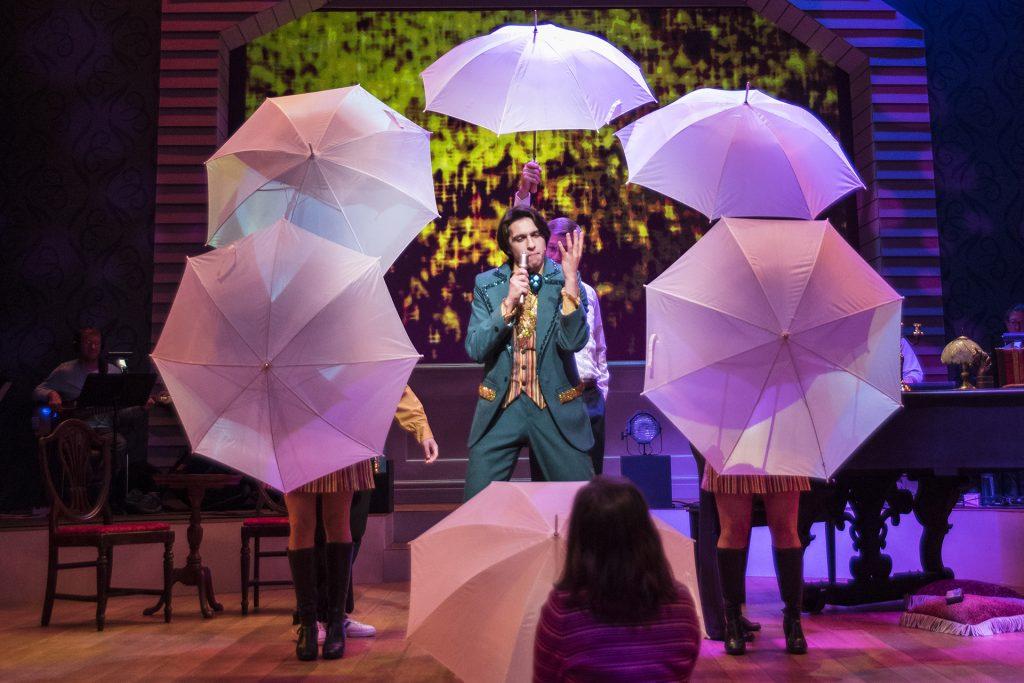 Austin Wicke performs in a dress rehearsal for Fun Home at Mabie Theater on Wednesday, Nov. 29. Fun Home is a production based off of Alison Bechdel's graphic memoir of the same name which entails the story of a girl's relationship with her father, discussing topics on gender roles, sexuality, and interpersonal relationships. (Ben Smith/The Daily Iowan)

It all comes back to our childhood. Playing airplane with our dad. Watching our mother practicing Chopin. Growing up. Going to college. Coming out to our parents. It all comes back, until now gives way to then.

The unique musical Fun Home, a winner of several Tony Awards, will begin its local run at 8 p.m. Friday in the Theater Building’s Mabie Theater. The run will continue through Dec. 9.

Fun Home is the story of cartoonist Alison Bechdel’s life during her coming out to her parents in her early college years. However, soon after Bechdel comes out, her father has a secret to share. He is also gay. But before they can begin to discuss this, her father is unexpectedly hit and killed by a semi.

When Fun Home premièred on Broadway in 2015, it gained attention for it being the first musical with a lesbian protagonist. It ultimately went on to win several Tonys, including Best Musical, Best Book of a Musical, and Best Original Score.

The New York Times reviewed the musical after its Broadway opening, and it seemed to see where the production would ultimately land and to know how audiences would take a shine to a new, exciting sort of musical.

“Fun Home knows where you live,” Ben Brantley wrote in his review “Fun Home at the Circle in the Square Theater.” “Granted, it’s unlikely that many details of your childhood exactly resemble those of the narrator of this extraordinary musical, which pumps oxygenating fresh air into the cultural recycling center that is Broadway.”

John Cameron, the director of the UI production, said what excites him about the musical is it is so different from its predecessors, “a striking variation on traditional musical theater.”

“The story is the priority more than the music, although the music is beautiful,” he said. “It examines the complex relationship between Alison Bechdel and her father, but I’m also very interested in the way that it openly expresses her early recognition of her homosexuality at the age of 12. Coming out is a difficult journey at best. This show brings a sweet and accepting perspective to that adventure.”

Something that sets Fun Home apart as a production is its creative team was all women, including Bechdel as the source material and original author, playwright Lisa Kron, and composer Jeanine Tesori. UI Associate Professor Jennifer Buckley said, “When the show won the 2015 Tony Award for Best Original Score and Best Musical, it marked the first victory for an all-female team in those categories.”

“Fun Home is not the first piece of musical theater to be adapted from a comic-book source — among them is Annie, of course, as well as the more recent Spider-Man: Turn Off the Dark — but it is the only one I can think of that integrates a cartoonist’s creative process into the show itself,” Buckley said.

“Fun Home is about Bechdel’s reckoning with her family’s, and particularly her closeted father’s, past, but it’s also about art-making,” she said. “It’s important, I think, that the show understands a self-described ‘lesbian cartoonist’ is an artist who deserves to be taken seriously. And Bechdel’s graphic memoir clearly does deserve to be taken seriously … But what Kron and Tesori have done is arguably more innovative — and to my mind, equally beautiful.”

For Cameron, directing a musical is a complex process, more like directing three shows as opposed to just one.

“In this case, you need to develop not only the very complex and challenging story of the play, you also have to define the presentation of the music,” he said. “And to a lesser degree, there is also movement and dance that need to be addressed. It’s an all-consuming process.”

The musical has often been called a “new sort of musical”, one specifically celebrating queerness in an art that has long been held in the domain of LGBTQ+ artists.

“Theater, and more specifically musical theater, has long been considered a ‘queer’ art, which welcomes the spectatorship of gay men and lesbian,” Buckley said. “This is not the first successful Broadway musical with overtly queer content; after all, Falsettos won Tonys in 1992. Off-Broadway, where Fun Home began, at the Public Theater, there have been successful queer musicals produced since at least the 1970s. Some of those made it to Broadway eventually. Just think of John Cameron Mitchell and Stephen Trask’s Hedwig and the Angry Inch (1998), which triumphed in 2014.”

However, for Buckley, there is one thing that causes the production to stand out: Women having their chance to shine.

“Fun Home is innovative in its placement of a lesbian at the story’s center,” she said. “Even more significant, I think, is that Bechdel gets to tell her story herself, with the creative contributions of two other important woman artists, Kron and Tesori.”

Fun Home shows the promise of being a musical for the ages, not one that would fade into the annals of musical theater. Despite the accolades of an all-women creative team, and having a lesbian protagonist at the center, Fun Home is much more than all of that.

“None of that would matter very much if Fun Home were not a magnificent piece of musical theater,” Buckley said. “It is so very good, and that’s why it will continue to be staged successfully for a very long time.”