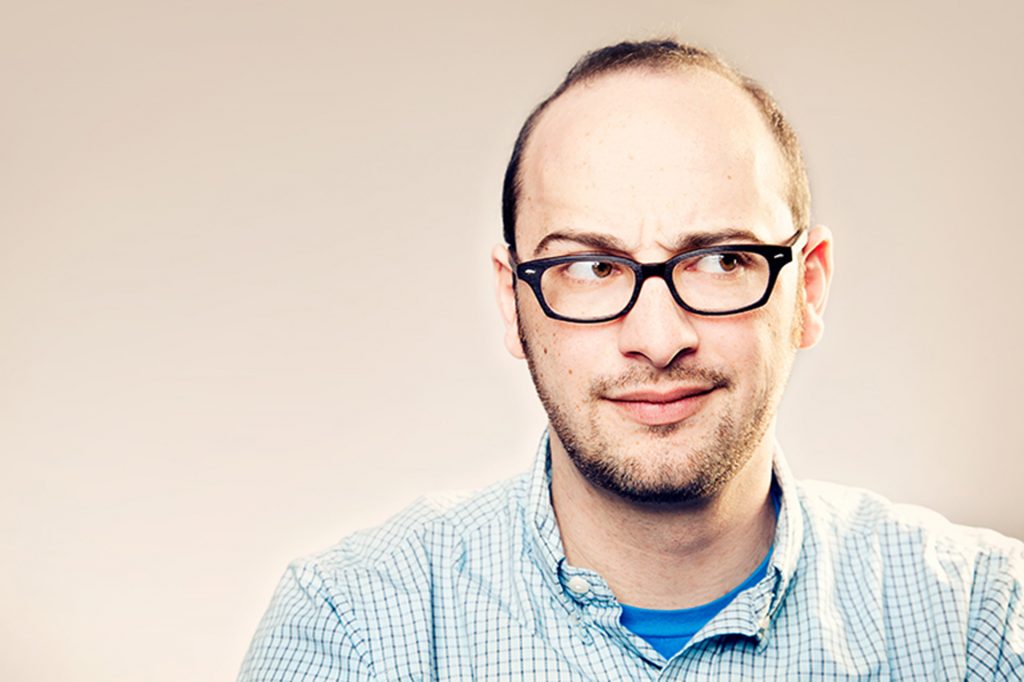 Known as the “nicest man in comedy,” Josh Gondelman grew up performing in the Boston comedy-club circuit. Whether it is political satire on “Last Week Tonight“ with John Oliver, witty standup on the “Conan O’Brien Show,” or writing a book of personal essays, Gondelman has mastered the art of comedic storytelling.

Gondelman performed a standup routine at the University of Iowa a few years back. The performance was “a show I will never forget because of the audience.”

Gondelman calls his performance Dec. 3 at the Mill at 8 p.m. “my open to the public Iowa City début.”

“Modern Seinfeld” was a Twitter parody account created by Gondelman and longtime friend Jack Moore. The initial concept was “If ‘Seinfeld’ were happening now, most of the plot would go out of the window because of technology,” Gondelman said.

Gondelman was hired to be the web producer for Season 1 of HBO “Last Week Tonight” with John Oliver. His comedic promise quickly earned him a position as a comedy writer for the next three seasons.

As his first staff-writing job on television, Gondelman learned to write comedy for a broader audience. In 2016, he won an Emmy Award for Outstanding Writing for a Variety Series. He was a vital part of the writing team that won the same Emmy award this year.

For Gondelman, television writing came as an extension of his standup comedy, which prompted his move from Boston to New York City. Gondelman prides himself on live performance, and his authentic personality on stage is indistinguishable from that off stage.

Comedians with signature styles and definitive voices have influenced Gondelman.

“It is always hard to pin down what my style is, but I would say that my style is pretty friendly — the vibe is very light,” Gondelman says. “I try to be approachable and friendly with the audience.”

His début standup album, Everything’s the Best, thrived because of its warm-hearted style and sharp-wit voice. His sophomore comedy album, Physical Whisper, débuted in March 2016 at No. 1 on the iTunes comedy charts. The two albums were a way for Gondelman to make lasting material while broadening his audience.

“It was a way for me to share my comedy with people who had not heard of me or were not able to come to one of my live shows,” he said. “I wanted to record them for posterity — if only my own.”

An avid writer, Gondelman enjoys writing about life for various news outlets, and his content is not confined to one particular subject. He said he wants his personal essays to explain the sincerity and humor found in the everyday.

Some of his personal favorites include Patriots fanatics in BuzzFeed, Sponsored Tough Mudder Racing in Esquire, an account of famous writers playing Taboo in The New Yorker, and Call Of Duty video-game critiques in McSweeney’s.

“It is a different way to express ideas that do not fit in standup,” Gondelman said.