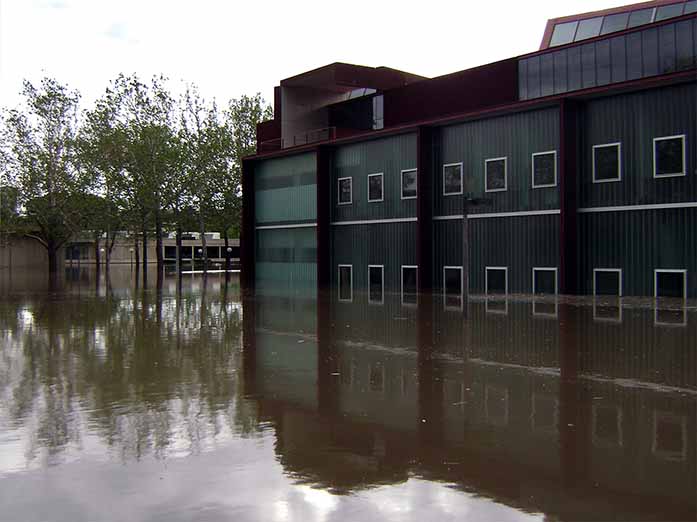 “IFIS, what are the flood conditions for Iowa City tomorrow at 5?”

“The river height near your location is 9.68 feet. There are currently no flood warnings in your area.”

When heavy rains pour in, or the river levels are high, artificial-intelligence systems through Skype, Facebook Messenger, Google Home, Amazon Echo, or Siri will soon be able to answer any question relating to rainfall or flooding.

Called “Flood AI Alpha,” the artificial-intelligence algorithm is one of many projects Assistant Professor of civil/environmental engineering Ibrahim Demir and a team of researchers has worked to help communicate information about natural disasters to the public.

“You can ask a question as if you are talking to a flood expert and get an instant answer with real-time data,” Demir said. “If your mother or grandmother wants to learn about something happening with floods, you want them to be able to access this data instantly.”

In 2008, a devastating flood caused $743 million in damage and recovery costs on the UI campus, according to the UI.

In response to the flood, the Iowa Flood Center was born in 2009. As a project for the center, Demir started working as the architect for the Iowa Flood Information System, an interactive visual website that provides public information about flooding for thousands of Iowa communities.

Launched in 2010, the website takes information from more than 250 sensors in Iowa rivers and streams to create visual maps that update every 15 minutes to show water height, rainfall, flood warnings, and inundation maps.

The website has had more than 2.4 million page views since it launched, and in September 2016, Demir said, the site crashed because of high traffic.

Demir’s next steps are to take that mine of information and condense it so anyone can access it without needing any technical knowledge of the interface.

It also includes information from the census to estimate cost of building flood damage and risk of economic damage, and people will even be able to ask IFIS to send a tweet, SMS message, or email to a loved one if water levels reach a certain height.

Demir will present his project, along with other projects, at a legislative breakfast in March 2018, which will double as its unveiling to the public.

His team of researchers is also developing augmented reality and virtual reality to use for building developers and other decision-makers.

Individuals such as city officials, engineers, and developers could put on a device like the HoloLens, and an entire holographic city would unfurl before them.

The VR project won second place as well as $20,000 worth of technology for an innovation challenge sponsored by the Weather Channel and Samsung at the Samsung Development Conference.

Project research assistant Muhammed Ali Sit said he is working to be able to categorize people’s tweets to determine locations of heavy rainfall or flooding.

“When people tweet about how there’s a flood in their backyards, but we don’t have sensors in that area to verify that information, we can use these tweets as a virtual sensor,” Sit said.