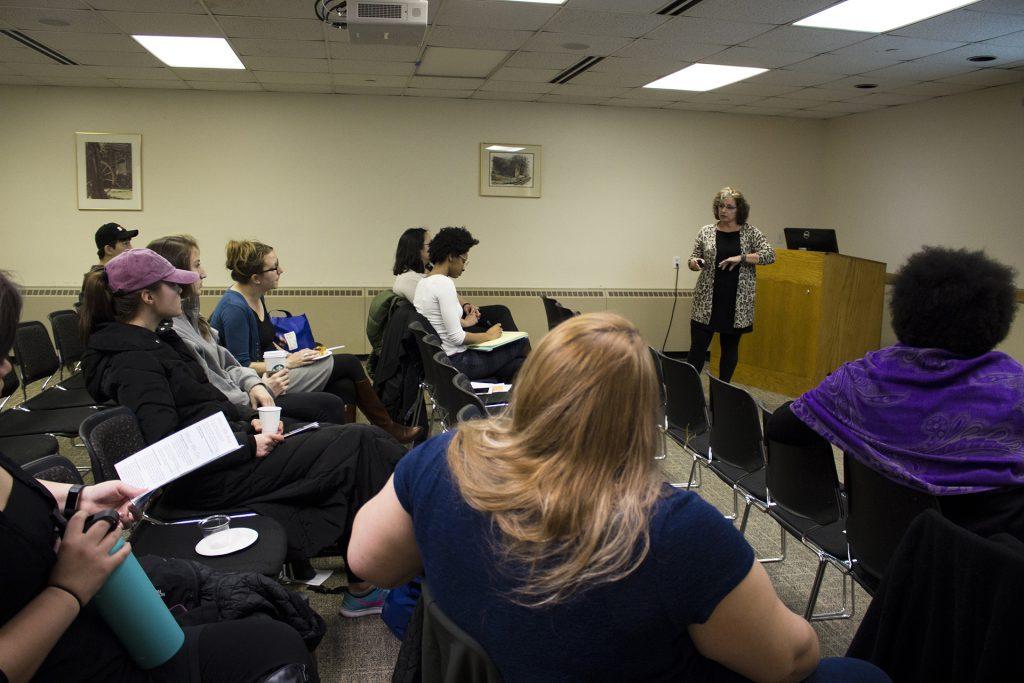 Audience members listen as Shelter House executive director Crissy Canganelli speaks about homelessness in Johnson county at the Cup O' Justice: Homelessness in Iowa and Our Local Response event in the IMU on Wednesday, Feb. 1, 2017. (The Daily Iowan/Lily Smith)

In order to support and protect the homeless from severe weather and cold temperatures, the Shelter House kicked off the “Out of the Cold” campaign on Tuesday.

The campaign marked the start of the charitable season; the goal is to raise $100,000. According to a press release, Shelter House got a jump-start by raising $2,500 on Tuesday, and it will open its Winter Emergency Shelter this week.

“The campaign aims to provide a warm, safe place to stay for anyone experiencing homelessness during Iowa’s life-threatening winters,” Angelica Vannatta, the development director of Shelter House, wrote in an email to The Daily Iowan.

Since 1983, Shelter House has provided many homeless individuals with a roof over their heads, and it aims to help people improve their quality of life. The program provides services that include housing, employment, and mental health that help a number of community members.

A new overflow shelter will be opened to accommodate the increased number of individuals — the bed capacity at the locations will be increased from 70 to 90 throughout this coming winter.

As temperatures drop, people left with nowhere but the street to turn are at risk of developing exposure-related conditions such as hypothermia and frostbite — both can be permanently damaging to health and can ultimately result in the loss of life, Vannatta said.

With the expanded winter-shelter capacity, individuals who would have otherwise been incarcerated or sleeping in encampments, parking ramps, and hallways of apartment buildings will instead be ensured a safe, warm place to sleep, she said.

As a result of the program going into effect, over the past three winters, vagrancy calls to the police and ambulance service calls have decreased.