Kevin Kastens, the Hawkeye Marching Band Director, is retiring after 20 years of teaching. 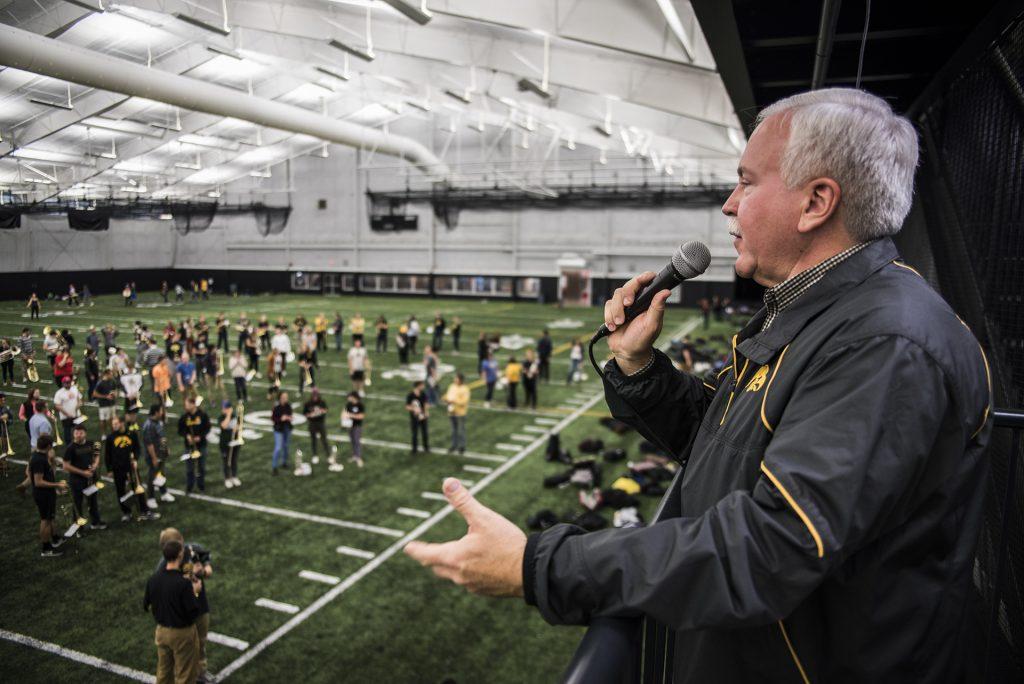 UI Marching Band Director Kevin Kastens directs the Hawkeye Marching Band during the second-to-last band practice of the season at the Hawkeye Tennis and Recreation Center on Thursday, Nov. 16. Kastens is retiring this year after 20 years in multiple directorial positions at the University. (Ben Smith/The Daily Iowan)

With the final wave of his baton on Saturday, a Marching Band icon will end a storied career.

Kevin Kastens will retire as the director of the Hawkeye Marching Band and the associate director of bands. His last marching performance will be on Saturday at Kinnick Stadium for the Iowa/Purdue football game.

He came to the UI in 1998 from the University of Missouri, and he has upheld traditions and entertained thousands ever since.

Kastens’ love of band started in high school, where he played saxophone, he said, and one of his band directors made him want to direct bands. He went on to graduate from the University of Illinois with a degree in music education and worked as a high-school band director for nine years. Kastens said he always knew he wanted to teach at a university, and he wound up teaching at Indiana University and the University of Missouri before heading to the University of Iowa.

Kastens said one of the best things about his job as the Hawkeye Marching Band director is how students are choosing to march instead of being forced to.

“I certainly have one of the best jobs on campus,” he said. “None of these students have to be in the Hawkeye Marching Band, they’re very highly motivated, they’re just great students to work with … they’ve really kept me young.”

Kastens is also the director of the Concert Band and teaches in the School of Music.

“One of the things that I’m going to miss is working with the quality of musicians that I have at the college level,” he said. “I may get to guest-conduct community bands down the road, or high-school honor groups, and things like that, but to have on a regular basis the quality of musicians that we have in the School of Music, I’m going to miss that.”

Two of his students, Tyler Foster and Analisa Iole, said they admire his ability to lead and his skill at creating marching shows that everyone will enjoy.

“He’s just very professional but also very welcoming to new students, and he’s easy to talk to,” Iole said. “He’s got a lot of experience and is a great guy to learn from.”

One of the memories Iole said she really enjoys is Kastens’ habit of encouraging her as she walks on the field at halftime.

As Iole approaches the field, Kastens wishes her good luck and tells her to get out there.

Foster’s fondest memory of Kastens occurred the first time the two met, when it became clear Kastens was a band director above the level of others.

“I remember my first year when I spoke to him for the first time, and he knew my name, which out of a 260-people Marching Band is incredible,” Foster said. “I don’t know many instructors I’ve had who have cared that much about their students.”

The university began looking for a replacement for Kastens in October, and it plans on having a confirmed new director by the end of April.