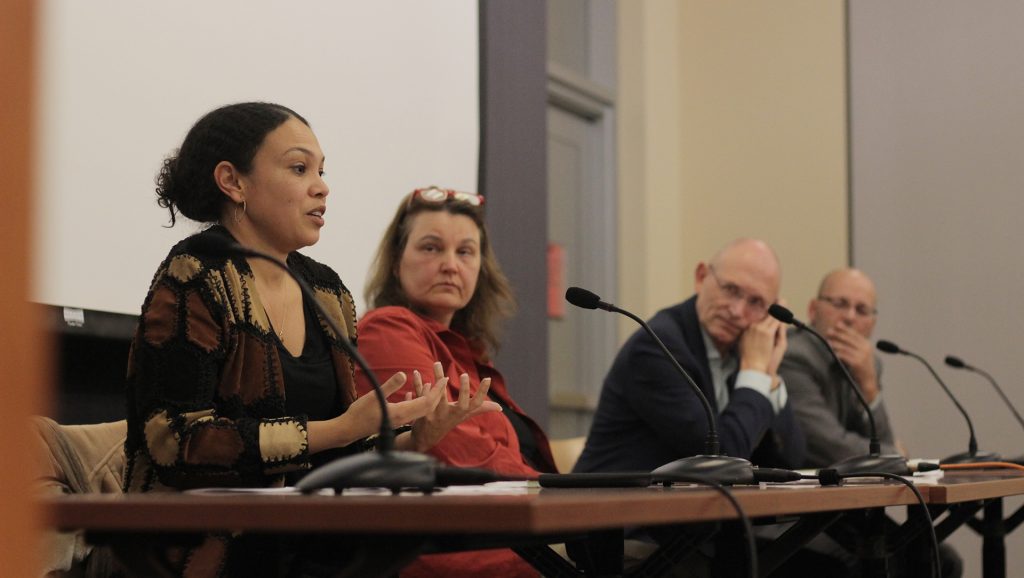 The Daily Iowan; Photos by Andre

Nell Gambiam Responds to an audience member during a Syrian refugee panel discussion at the Iowa City Public Library on Monday, Nov. 6, 2017. The panel discussed refugee immigration and how it is affecting various countries. (Andrew Baur Schoer/The Daily Iowan)

New immigration policies under the Trump administration are having an impact on individuals in the immigrant communities locally and beyond.

During the forum hosted by the Iowa City Foreign Relations Council, Elias broke down the legal aspects as well as the real world effects on individuals in Iowa City and across the country.

Although the Trump administration has suggested various changes in immigration policy, Elias said it is not that easy to change the actual immigration laws itself.

Elias said the main change since Trump took office has been the ways in which immigration laws are enforced.

He said there has been a variety of press releases and tweets suggesting significant changes in immigration policy that have not actually occurred. But these suggestions of policy change have led to an increase in fear and feelings of insecurity among the immigrant population.

During Trump’s campaign, Elias said Trump talked about reinvigorating the public charge doctrine. This would mean that immigrants would be denied status or admission if they relied on or would likely rely on the government for various benefits, such as food stamps or housing assistance. As a result, Elias said school children entitled to free and reduced lunch turned down their food out of fear of the immigration repercussions.

Elias shared another more local story from an anonymous friend. His friend works at a UI hospital with a variety of patients. She recently found out one her repeat clients with a life threatening illness had been avoiding the hospital for months in order to avoid the possibility that his undocumented status would be revealed.

Through his many specific examples, Elias showed how the psychological impacts of the perceived changes in policy and the distrust of officials have made a noticeable difference both locally and nationally.

UI senior Monzer Shakally has been working and studying in Iowa for five years after emigrating from Syria to escape the war. He currently has temporary protected status, although it expires in March.

“It’s kind of up in the air whether they renew it or not and if they don’t, it will greatly affect me.
I would have to seek legal status in another way, such as a student visa,” Shakally said. “It would take away my employment abilities and my in-state tuition.”

Ney Randall, the UI director of faculty and staff immigration services said he has noticed several changes to international UI staff and faculty since the Trump administration took office.