Gun regulation, or lack of, in spotlight 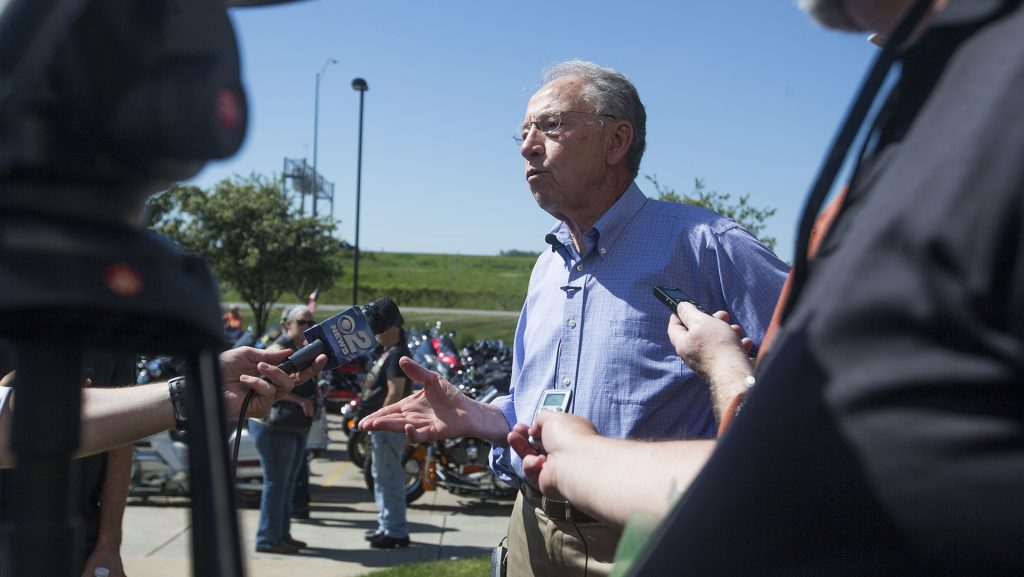 According to a press release from the office of Sen. Chuck Grassley, R-Iowa, office, the Judiciary Committee and Chairman Grassley will conduct what the release referred to as a thorough review of firearm-accessory regulations and enforcement of background-check requirements.

A bipartisan bill was proposed three weeks after the Oct. 1 Las Vegas shooting to ban bump stocks, a firearm accessory that allows semiautomatic weapons to have similar firing as a fully automated weapon.

The bill was referred to the House Ways and Means Committee on Oct. 31. Grassley has not expressed any definite support of the legislation, but he expects the issue to be brought up at the Dec. 6 hearing.

Groups like Everytown for Gun Safety, whose members range from veterans to gun owners to mothers, are not anti-gun, but anti-violence. The group is one of the largest advocacy organizations in the country.

Moms Demand Action for Gun Sense in America is a grass-roots organization to Everytown, which developed after the Sandy Hook tragedy. The Iowa chapter is one of the most active.

RELATED: In their own words: students respond to local gun violence

Katie Albrecht, a volunteer leader with the Iowa chapter of Moms Demand Action, said the recent mass shootings in Las Vegas and Sutherland Springs, Texas, have brought attention to glaring holes in the federal law.

“We are glad Sen. Grassley has agreed to hold a hearing on bump stocks and gaps in the background check system,” Albrecht wrote in an email to The Daily Iowan. “Americans are outraged that Congress has so far failed to act and will demand that Congress take action to restrict access to bump stocks, close gaps in the background-check system, and keep guns out of the hands of domestic abusers and stalkers.”

Kurt Liske, the president of the Iowa Firearms Coalition, said he thinks a ban on bump stocks is unlikely and members of his group have made it clear that they do not support this kind of measure. Liske believes that the bigger problem is the background-check system.

“It’s great legislation for those who want to limit our individual freedoms,” Liske wrote in an email to the DI. “The fact is, if more gun-control legislation is passed, it would simply limit the rights of tens of millions of law-abiding citizens and punish them for the actions of a minuscule number of deranged lunatics.”

Liske said the NRA-affiliate club has been extremely busy in reminding Grassley that not all Iowans support the bump-stock ban.

But because former Gov. Terry Branstad signed House File 517, which greatly expanded the gun rights of Iowans, the state remains relatively gun-friendly. The law includes children being able to handle guns under adult supervision and allows people to use deadly force as a form of self-defense in life-threatening circumstances, also known as the Stand Your Ground provision.

The Dec. 6 hearing is expected to examine lingering questions that Iowans have regarding gun regulations.