During Dance Gala 2017, the UI Dance Department integrated digital media in its piece, “Kansas No More,” bringing the dancers in and out of different worlds. 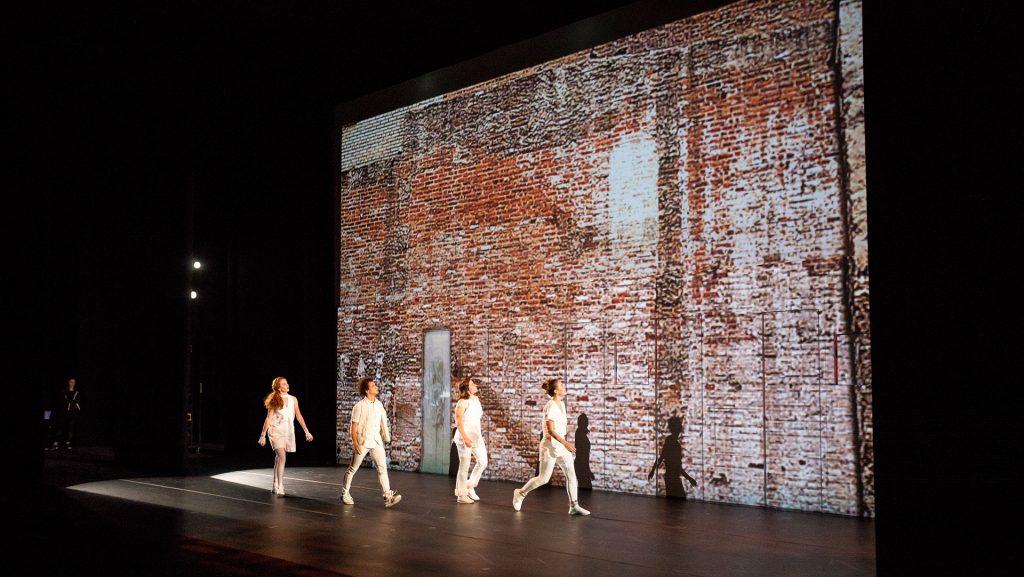 Students from the University of Iowa Dance Department perform the dance ‘Kansas no More’ as part of Dance Gala 2017 at Hancher Auditorium on Wednesday, Nov. 8, 2017. (David Harmantas/The Daily Iowan)

This past weekend, audiences experienced both digital media and dance combined at the University of Iowa Dance Department’s Dance Gala.

The first piece, “Kansas No More,” choreographed by Dance Gala Artistic Director Charlotte Adams, began with a digital media component. Dancers were shown in a Midwestern-style home, dancing past every window, occasionally taking a moment to peek through to the outside.

The house gradually moved closer to the audience, and the dancers suddenly come alive as they walked out of the home through the front door, turning what was once an imagination into a reality.

Fine developed a curriculum in the fall of 2016 that focused on the creation of digital media and its integration in live performances.

His current courses include Producing and Directing Digital Video and Installations and Interactive Performance, which teaches students how to manipulate video and digital media in real time. Next spring, Fine will also teach Video for Performance for the first time, which will teach students how to integrate video into live performances.

One of Fine’s students, Marc Macaranas, designed the first scene, which included the Midwestern home.

Throughout the performance, the scene transitioned from a Midwestern home to a brick building, then from a scene of nature to a digitalized, abstract scene.

“[Adams and I] started collaborating last October, and [we] just began talking about different ideas that we liked and ideas that inspired us, both digital work and movement work,” Fine said. “We were talking about opposites, and that led us to [begin] thinking about a wall and how a wall can divide people … Adams then brought up an idea that doors can become entrances and exits into different worlds, bridges in between worlds, [that] take people through different worlds.”

The dancers acted with the digital media as if it were another dancer, integrating it into every move they made. During one scene, a hand appeared, wiping everything off the screen and the stage, including dancer Arianna Russ.

“I think the digital media component in itself [gave] the piece an edge that [was] otherwise not seen throughout the concert,” she said in an email to The Daily Iowan. “But more importantly, the interdisciplinary nature of this work is extremely relevant in terms of art making in the present day.”

Integrating digital media into “Kansas No More” made the piece stand out among the other performances, sparking surprise from the audience.