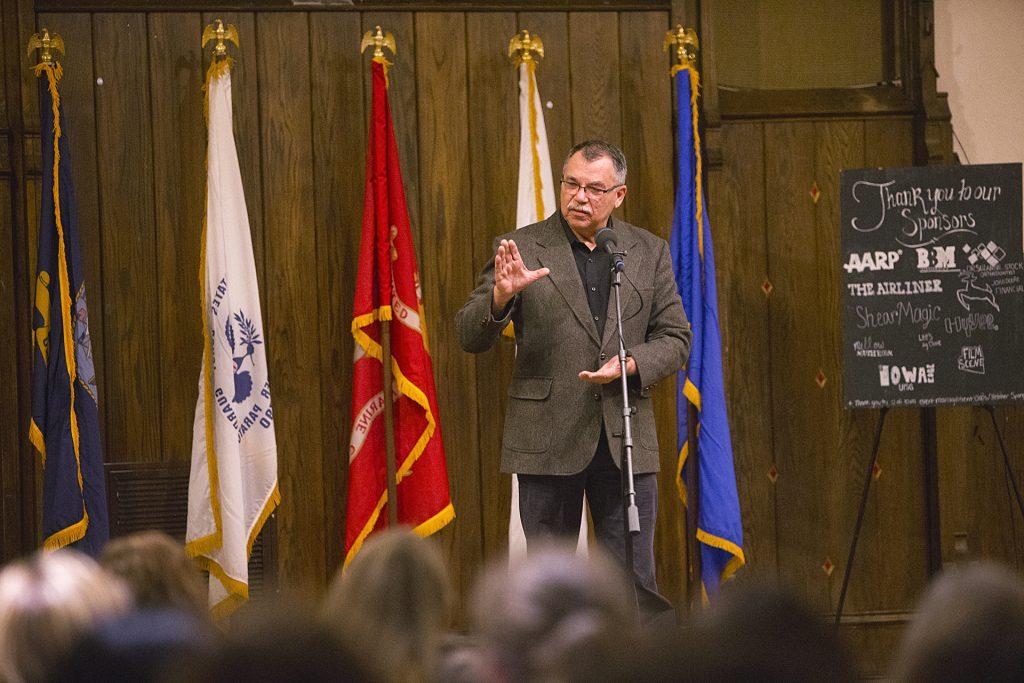 Dr. Jon Kerstetter speaks at a fundraiser for Iowa Watch on Thursday, Nov. 9, 2017. Dr. Kersetter spoke about his experiences as a military doctor and about dealing with memory issues resulting from complications of injuries sustained while serving. (Nick Rohlman/The Daily Iowan)

With Veterans Day quickly approaching, service members had an opportunity to share stories Thursday night in an event hosted by IowaWatch.

The veterans ranged from Iraq vets in their 30s to Vietnam vets in their 70s, and each told a unique story about their experiences in the military. They didn’t all revolve around combat, but each held tremendous emotion that stemmed from their military lives.

Jon Kerstetter spoke about his tours in Iraq as a combat physician and how a stroke after surgery for injuries he sustained during his third tour changed his life.

One instance during his time in Iraq that he said meant very much to him was when he visited a hospital for IED patients. He went into the room of a patient who was about to die and saw that his fellow soldiers were at the foot of the bed. Together they prayed for him, and Kersetter held him in his arm and told him it was OK, and that he was going home.

“I held him, I loved him, and I let him die, as a father,” Kerstetter said. “Not as a soldier, not as a doctor, not as a general, but as a father and a fellow human being, and that was the most significant, I think, of all the things I did there.”

This is the second in a series of The Iowa Center for Public Affairs Journalism, or IowaWatch’s, live reading events.

IowaWatch is a regional nonprofit, nonpartisan news organization that is focused on training college students and high-school students to become investigative journalists.

“In-depth reporting is important now more than ever so that we have an informed citizenry that can function in a democracy, and when I say now more than ever I’m not talking about for political reasons …” Lyle Muller, executive director-editor of Iowa Watch, said. “We need an aggressive press because we are so willing to just take superficial information and jump to conclusions about anything.”

[Muller is a politics adviser for The Daily Iowan.]

While this reading will be a good source of fundraising, Muller said, it will also help to get the word out about what IowaWatch is.

“The goal here is to get people to know who we are and connect us with authentic storytelling,” he said.

The event was coordinated by Heather Spangler’s Foundations of Event Management class. Every class has to put on one event for a project, and students worked in small groups to tackle different aspects of the reading, such as budgeting and marketing. Spangler said a project like this one teaches students something that they couldn’t learn in the classroom.

“I think having a real-world application for the things we’re teaching in the classroom really makes it more impactful and more lasting experience than if we were just talking about it,” Spangler said.

The students also recruited veterans to speak, and communicated with them throughout the process, even coaching them through how to tell their stories in a live-storytelling setting, Spangler said. She and IowaWatch Board President Erin Jordan selected the six veterans to speak at the event.