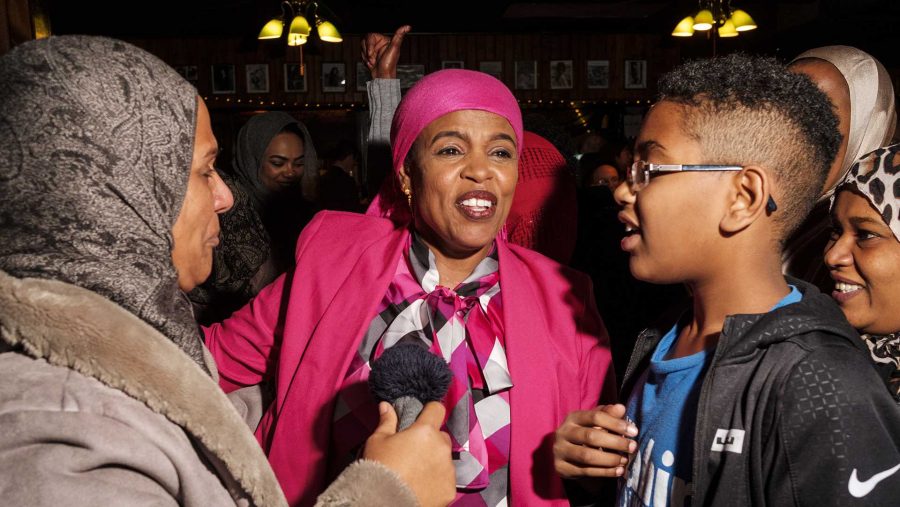 Mazahir Salih is congratulated by suporters and family members after election results were announced at the Mill in Iowa City on Tuesday, Nov. 7, 2017. Salih won an at large seat on the Iowa City city council along with incumbent Kingsley Botchway. (Nick Rohlman/The Daily Iowan)

Iowa City will have its first Muslim woman and immigrant on the City Council.

Candidate Mazahir Salih was the only newcomer elected to the council on Nov. 7. Incumbent Councilors Kingsley Botchway and Susan Mims retained seats, with Mims moving from at-large to the District B representative.

Salih and Botchway beat Angela Winnike for the two at-large seats, and Mims prevailed over newcomer and University of Iowa student Ryan Hall to clinch the District B seat.

Around 15.5 percent of registered voters voted in the election.

Botchway won the largest percentage of votes for the at-large seats with 78 percent, and Salih was close behind with 77 percent. Winnike received 19 percent of votes.

“All the people around the table really helped me, not only from just a mental-health or state-of-mind standpoint, but just by helping me through the process,” Botchway said. “I think that we really campaigned for the people. We just wanted to get out there and make sure we talked to as many people as possible.”

Botchway said he was excited, honored, and humbled that the community wanted him to continue his work on council.

After the last precinct sent its votes, the Salih campaign’s cheers of excitement echoed around her watch party at the Mill. Campaign manager Shawn Harmsen took the microphone to the stage and introduced Salih to the crowd as the first Sudanese Muslim woman to serve on the City Council.

“I can’t even talk, but I am very very excited,” Salih said. “I campaigned hard, and I wanted to win, but I never pictured this moment.”

For the District B seat, Mims beat Hall 59 percent to 41 percent.

Mims nervously paced around the club room of Blackstone minutes before polls closed, staring up at the screen showing the incoming results. Supporters at the watch party began to quiet down and gather around the front of the room as 8 p.m. drew near.

The small crowd broke into applause as numbers favoring Mims came in — one child in attendance exclaiming he found a penny and it meant Mims would win.

Eventually, all 46 precincts in Iowa City had reported, and Mims was declared the winner.

The crowd began to sing “Happy Birthday” to Mims, who was celebrating her 61st birthday.

“I was hopeful, but I don’t think you ever count on anything until the votes are all in,” she said. “You never know who’s going to get out to vote.”

Mims’ husband, Fred Mims, said he was proud to be her husband, and he believed her win was a great tribute to her dedication to the city.

Although Hall, a UI student, lost the seat to Mims, he said he still wants to be a presence in the community.

“I’m going to continue using my platform in whatever capacity it looks like to try to promote progress in our community,” Hall said. “I don’t know what it’s going to look like, but I know I want to stay involved.”

Hall said he was disappointed by the voter turnout — 15.5 percent.

“I think there’s a chronic problem in our community with turnout overall; it wasn’t just students,” Hall said. “It just goes to show there’s a lot of work to be done with voter education to mobilize people to care about local issues.”