The Hawkeyes will open up the season with an exhibition game against Minnesota State-Moorehead on Nov. 5. 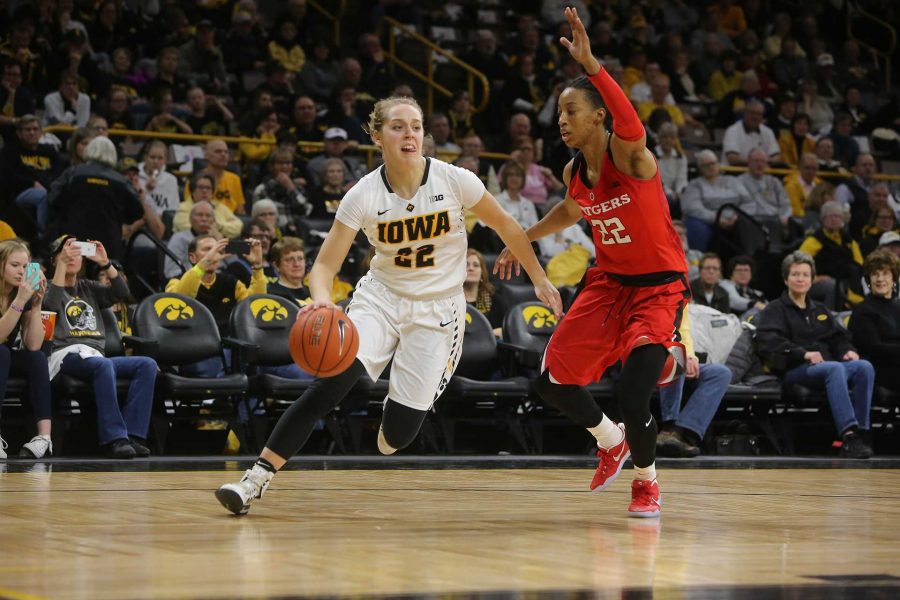 Iowa guard Kathleen Doyle drives around Rutgers guard Kanjis Barber during the meeting between the Iowa Hawkeyes and Rutgers Scarlet Knights on Thursday, February 2, 2016 at Carver Hawkeye. The Hawkeyes had a strong second half, pulling away with the 71-57 win. (The Daily Iowan/ file)

The Iowa women’s basketball team will tip off the 2017-18 season on Nov. 5 with an exhibition game in Carver-Hawkeye against Minnesota State-Moorehead at 7 p.m.

The Hawkeyes will be without the services of Iowa all-time leading scorer Ally Disterhoft, who graduated in the spring.

Disterhoft’s scoring ability will be missed, but there are plenty of returnees on the team that are more than capable of picking up the scoring slack.

“She was a four-year starter for us, just an amazing basketball player and obviously a tremendous student as well,” head coach Lisa Bluder said. “But one person is not going to replace Ally. Just like one person can’t replace Sam Logic. Everybody’s got to get better. For us to replace Ally, it’s got to be a group effort.”

Bluder had great news for her group on media day when she announced junior guard Tania Davis would be ready to go for the first game of the year after tearing her ACL in February.

Before going down, Davis averaged 10.9 points and 4.3 assists a game, but her importance to the team can’t be described by a stat line.

“Don’t get me wrong, playing against my teammates is all fun,” Davis said. “But just to be able to be out there and play against other people and to just play in a game-like setting, it’s exciting to me.”

Joining Davis in the backcourt will be sophomore guard Kathleen Doyle. Though Davis and Doyle have very similar playing styles and are traditional point guards, Bluder said they would coexist at guard.

As a freshman, Doyle averaged 9.2 points and 4.4 assists per contest, and she should see an increase in both of those categories, especially in the scoring department with the loss of Disterhoft.

Sophomore guard Makenzie Meyer is the third returning starter in the backcourt, and Bluder believes she will be one of the best 3-point shooters in the country.

Leading the charge down low are junior Megan Gustafson and senior Chase Coley.

As a sophomore, Gustafson led the Hawkeyes last season in points and rebounding, averaging 18 and 10, including 18 double-doubles. Even with Gustafson’s eye-popping numbers, Bluder thinks she is capable of more.

“I want her to continue to improve,” Bluder said. “I’m never happy with where they are. I always want to push them to make them better, and she’s no different. She continues to want to focus on her rebounding. She averaged 10.1 rebounds a game. She wants to average more.”

After starting 31 games as a sophomore, Coley only started in two games last season, but she hopes to perform as she did two seasons ago.

With only 11 players on the roster, the coaches are well aware of the players’ fatigue and making sure they get necessary rest.

“I have to be careful of their legs, but I’m going to worry about their legs in practice and not during games,” Bluder said. “Remember how much energy you had when you were an 18- and 20-year-old. When the lights come on, the fans come out, they’ll be ready to go.”