The Hawkeyes have been preparing — mentally and physically — to battle another strong Big Ten team. 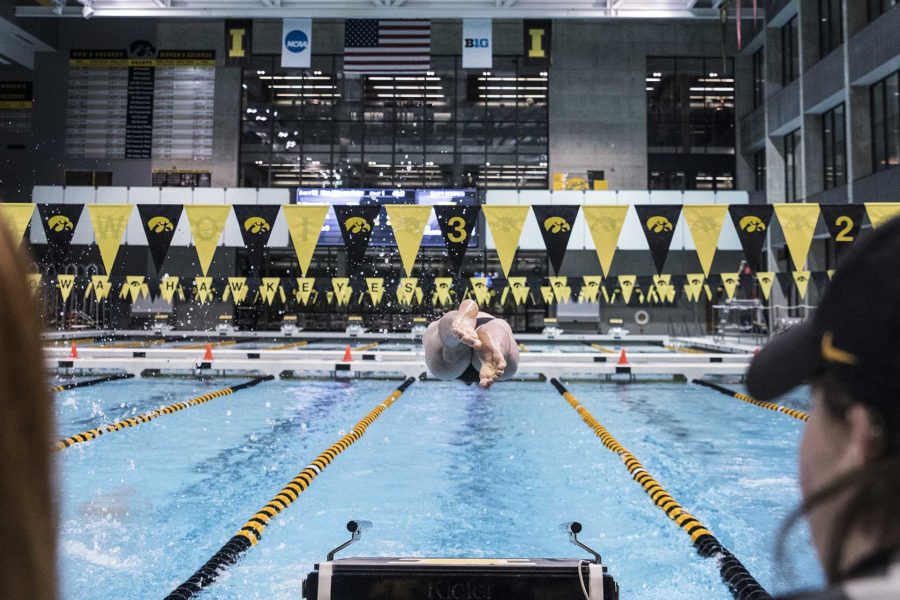 A swimmer dives into the water during the Senior Day meet between Iowa and Minnesota at the Campus Recreation and Wellness Center on Friday, Oct. 27, 2017. The Iowa men's swimming team beat the 21st ranked Minnesota Golden Gophers 168-132. (Ben Smith/The Daily Iowan)

However, the rankings don’t faze the Hawkeyes. After the men’s team beat ranked Minnesota on Oct. 27, the confidence level has risen.

Freshman diver Anton Hoherz posted a win in one diving competition and came in second in the other. That performance against Minnesota is driving his confidence going into the meet against Purdue.

“Minnesota is one of our biggest rivals, and they have a really strong team as well,” Hoherz said. “I think if I just get into perspective that I could do this against Minnesota, I can do the same thing against Purdue.”

“I’m looking forward to seeing some old and new friends and seeing what I can do against some really good guys,” Hoherz said. “They have an Olympian on their team, and I’m really excited to see what my training has brought me against someone like that.”

In the swimming lanes, it’s all about getting the chance to compete.

The swimmers have been working on drills and the technical parts of each race, so getting the chance to meet an opponent is always exciting.

“They’re a really good team,” swimmer Joe Myhre said. “It’s a good Big Ten dual; we do them every year, and they’re going to be pretty hungry to beat us. Just looking forward to racing.”

Freestyler Hannah Burvill finished second in four of her events against Minnesota, and this week, she has focused on how to improve her personal game.

“I think a lot of it is mental going into it, kind of knowing what to expect and what you can kind of contribute to the team,” she said. “I know I’ve been focusing on a lot of not trying to get in my own head as much, just swimming and not thinking about it too much.”

For the young swimmers and divers, this is their first big road trip, a potential disadvantage.

At home, the athletes know the pool inside and out, but on the road, they have to test everything out and try to get comfortable quickly, Hohertz said.

This time of the season also brings disadvantages in performances.

“We’re still in the heavy training type of the season here as we kind of prepare for our big fall meet and, of course, the end of the year, so the challenge for people is to learn how to swim fast and compete really well when they might be sore,” head coach Mark Long said.

Despite the disadvantages the Hawkeyes might face, the confidence in the entire team remains.