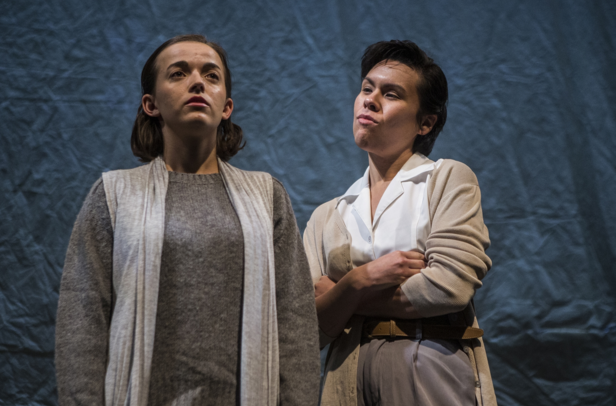 The cast of Bad Things Happen Here rehearses inside Theatre B of the UI Theatre Building on Wednesday, Nov. 1, 2017. The play is directed by Lila Rachel Becker. (Ben Smith/The Daily Iowan)

The UI Theater Department will stage bad things happen here, a play that portrays a fear of a dystopian society, coincidentally reflecting fears of today’s society.

In a world in which citizens sit on the knife’s edge of chaos, where people disappear without a trace, never to be found again, where citizens are a few moments away from disturbia, bad things happen here examines what it would be like to be on the inside of the infamous Argentine Dirty War, in which state-sanctioned violence reigned supreme.

Tonight through Nov. 5, the UI Theater Department will produce bad things happen here, a play that encompasses the fear of a dystopian society, in the Theater Building’s Theater B.

The scenes are not in chronological order, allowing the audience members to piece together the play as they want. This provides the audience with an interaction with the play that they would not have in a typical production.

Marlin began writing this play by analyzing the history of the Dirty War in Argentina, which spanned from 1974 to 1983 and left anywhere from 9,000 to 30,000 citizens dead or disappeared.

“[During the Dirty War], there was totalitarian-style governance, major suppression of peoples’ rights,” he said. “There was intense surveillance happening in Argentina at the time … If [citizens] were [believed] … to threaten the government, [they] would farcically disappear.”

Another element of the play that feels more and more relevant with each day is based on straddling the line between security and chaos, safety and fear.

“The play does something really interesting with the idea of dystopia,” said Molly Winstead, one of the two main actors in the play. “Where I think a lot of people right now, especially students here, feel really unsafe by the current administration. This play really deals with that danger in a way that I think is actually more realistic, and, therefore, more frightening than a lot of other dystopian plays.”

The production also has some strong, current political ties to today’s society.

“I began writing the play about three years ago, when it was just me being interested in [analyzing] the Dirty War,” Marlin said. “I certainly felt that within the past year, the piece has a sort of relevance that that I certainty couldn’t have predicted. So, it’s interesting to see how the play resonates with certain political conversations. The play feels more immediate than when I wrote it three years ago.”

Director Lila Rachel Becker said the production forces the audience to confront the nature of an unstable political climate, in which things can radically change in only a few moments.

“It is examining a future that is rather disturbing,” she said. “[People] feel like it couldn’t happen in America, but I feel like this future is a couple minutes away.”