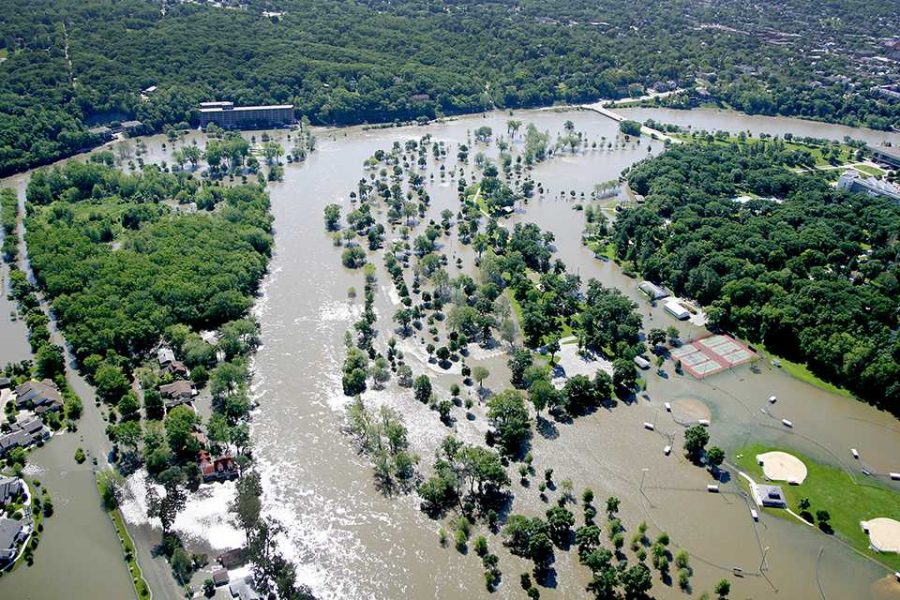 Iowa City has purchased its 100th flood-buyout property and is now scheduled to demolish it as part of the ongoing plan to reduce possible future damage in the Iowa River floodplain.
By Brooklyn Draisey
[email protected]

Iowa City has reached an important milestone in keeping citizens safe from flooding.

The city of Iowa City has purchased and is now scheduled to demolish its 100th flood buyout property as part of the ongoing plan to reduce possible future damage in the Iowa River floodplain.

The first residence was purchased in 2009, and since then, 90 homes have been purchased in Parkview Terrace, six along Taft Speedway, and four next to Creekside Park.

Since the 2008 flood, Iowa City has worked to reduce the chance of future damage to people’s homes. When the city began buying and demolishing property, any property was eligible as long as it was in the 100- or 500-year floodplain. But since then, Neighborhood Services Coordinator Tracy Hightshoe said, qualifications for funding have gotten much stricter.

“As time goes on, there are more restrictive requirements, like now homes must be in the 100-year floodplain and have flood insurance,” Hightshoe said.

Owners of these home sold their property voluntarily, she said. If owners don’t want to leave, they don’t have to. The city sends out letters of inquiry to homeowners to see if they are willing to sell their property and then offer a price based on an appraisal.

If owners don’t like the price, she said, they can have their own appraisal or just refuse to sell.

“It’s completely voluntary; the homeowners don’t have to accept,” she said. “So, unless they’re satisfied with the price the city paid, they could back out at any time.”

She noted the most important thing to think about when creating a green space in a floodplain is making it flood tolerant.

“Anything we put there needs to be floodable,” Seydell Johnson said. “Structures need to be on higher ground in the park than on the new lot … in the case of Creekside, we hope to do some community garden spaces on some of the land, possibly tree planting, wetlands, that sort of thing.”

The department will be conscious of what it plants in the floodplain, she said, to make sure that it’s flood-tolerant.

Enforcement specialist Lucy Joseph, who has worked on the project for three years, said she is proud of how Iowa City is working to keep residents and their belongings safe.

“It’s another home that we, the city, and the homeowners don’t have to worry about in the case of a flood,” Joseph said. “It’s the safety of the homeowner and not having to find different housing or relocating that family to somewhere while their house is flooded out.”

Joseph and Hightshoe both said the city will continue to apply for funding when it’s available to purchase more homes and create a safer floodplain.

“It’s getting more restrictive about what homes we can even buy under these programs, but as time goes on, we’ll keep purchasing as many as we can, given the funding that’s available,” Hightshoe said.