Basketball season is almost underway, and the Iowa women’s backcourt wants to prove itself as elite this year. 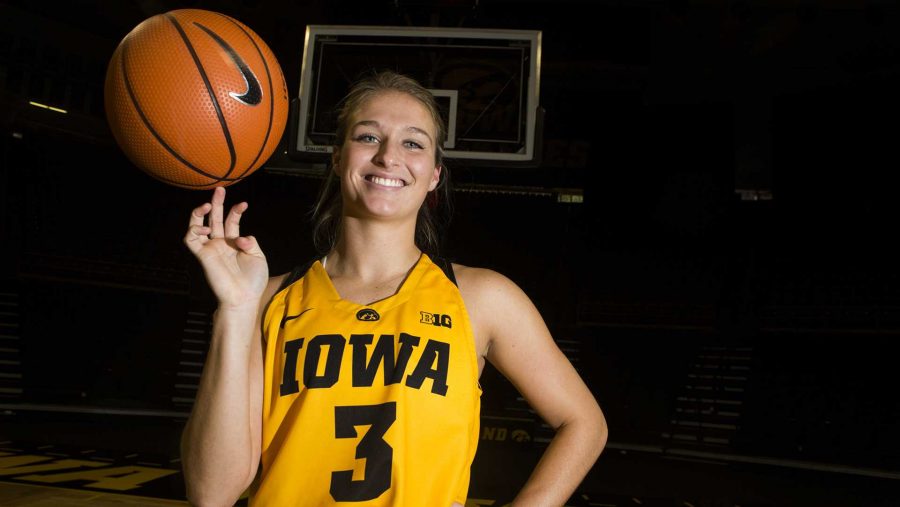 Iowa sophomore guard Makenzie Meyer poses for a portrait during the women's basketball media in Carver-Hawkeye Arena on Monday, Oct. 23, 2017. The Hawkeyes will open up an exhibition game against Minnesota State-Moorhead on Nov. 5 at 7 p.m. in Carver. (Joseph Cress/The Daily Iowan)

This past weekend, a lot of Iowa City dressed up and celebrated Halloween, signifying the end of October.

For basketball fans, this means the season is a calendar-page turn away.

With Iowa’s disappointing football season and the plethora of talent, both male and female, on the basketball court, this could be a very exciting winter for Hawkeye hoops.

Most of the hype for the women’s team rests on All-Big Ten junior center Megan Gustafson.

What might get lost under Gustafson’s tall shadow is the talented backcourt that Iowa has built up behind her.

Sure, Iowa lost Ally Disterhoft, the Hawkeyes’ all-time leading scorer, but now the Iowa backcourt is stacked with a bevy of talented young players. The loss of Disterhoft means the they have to collectively fill her shoes.

“One person is not going to replace [Disterhoft],” coach Lisa Bluder said. “Everybody’s got to get better. For us to replace Ally, it’s got to be a group effort.”

Having Tania Davis back early from injury will certainly help the Hawkeyes; before she went down with injury last season, she averaged 10.9 points per game with 4.3 assists.

RELATED: Tania Davis’ return to Iowa basketball from injury a most welcome sight

Don’t expect the injury to affect those numbers too much. Davis may have questioned her ability to come back at first, but now she’s as confident as ever.

“Going down, my first thought was, ‘Will I ever be the same?’ ” Davis said. “But after putting in the amount of work that I put in, and to make the moves that I made previously in practices, [it] has given me a whole lot of confidence.”

While her injury may have hurt their season last year, it should prove a positive for the Hawkeyes’ season this year, because it gave then-freshman Kathleen Doyle a chance to shine.

This year, she was elected captain by her teammates and has Bluder drawing comparisons between her and Iowa’s all-time assist leader Sam Logic.

“It’s a big name to be compared to,” Doyle said. “Obviously, I’m honored to be in that group. Hopefully, I can turn out to be as good as Samantha Logic.”

It’s an apt comparison; both women are 5-9 point guards, who both each started at least 29 games as freshme n, but the numbers prove they share more than position and height.

RELATED: Women’s basketball is small in numbers, mighty in spirit

Bluder knew what she was talking about.

Doyle’s classmate and guard Makenzie Meyer also heard her name next to a Hawkeye great on media day. This time, it was the Hawkeyes’ all-time 3-point leader Melissa Dixon.

Meyer (42) actually made more 3s than Dixon (35) in her first year, and she hopes that can continue.

It will if she listens to her coaches.

“The coaches have always been extremely confident with me shooting the 3, and they keep telling me to shoot it even if I miss 10 in a row,” Meyer said.