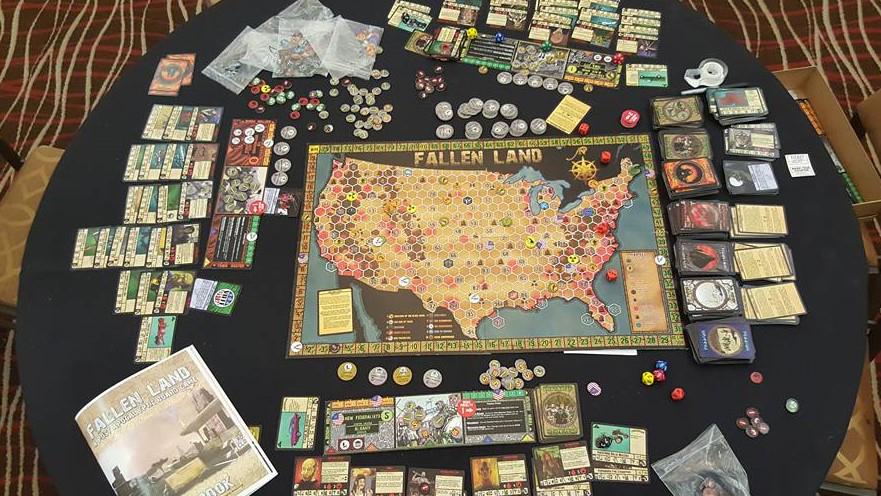 An Iowa City company has put Iowa City on the map — at least in its board game.

Fallen Dominion Studios, a board-game company based in Iowa City, has produced Fallen Land: A Post-Apocalyptic Board Game. The game is available on Amazon and at the Hobby Corner in Iowa City and Cedar Rapids.

Co-creators and owners of Fallen Dominion Studios Jon Lonngren and Sean Cahill had the idea for the postapocalyptic game in 2005, and it took around 12 years to complete. Lonngren said they wanted to make the type of game they would want to play, in a genre that was sorely lacking.

“Sean and I wanted to create a game in the postapocalyptic genre, we wanted to lay some solid bedrock in that genre of game,” he said. “There really wasn’t anything that had been done before in that area, and we decided to create a game that we always wanted to play that didn’t exist. Since then, we’ve basically been working on that, and it’s finally done.”

Fallen Land combines elements of card games, strategy board games, and role play to create a unique experience, player Ken Hicks said. He described it as a combination of Magic: The Gathering, Risk, and role-playing games.

“It’s really solid, easy to follow, and you just lose track of time while playing it,” Hicks said. “It really has something for everyone.”

Lonngren wrote what he estimated as around 600 stories for the game, and more than 800 pieces of artwork are featured. Fallen Dominion Studios’ editor-in-chief, Bill Pitcher, goes through all the individual components of new games before they’re put on the market to make sure that everything works well together.

“You have to make sure that the cards look good, the layout looks good, the story flows in a condensed format to convey as much as possible in as few words as possible,” Pitcher said.

Pitcher started out as a game tester for Fallen Domain, then was hired as editor-in-chief. The game has received a rating of 8.8 out of 10 from BoardGameGeek, an online forum for board-game enthusiasts.

With all the stories put in the game, a player could play the game over and over again and never have the same plot, Lonngren said. Hicks said he has played Fallen Land around 20 times and never ran into the problem of knowing what was going to happen.

“It’s literally a different story line every time, and you don’t have to try hard to have that scenario,” Hicks said.

This type of postapocalyptic sandbox-style game is unique in many different ways, Lonngren said. The time span for the story is incredibly long, with each individual turn representing a month in the story. Players try to expand their territory as the leader of their factions and must manage both their settlement and their agents out in the field while interacting with other factions.

Their goal is to survive, and they can only do that by working with or against other players.