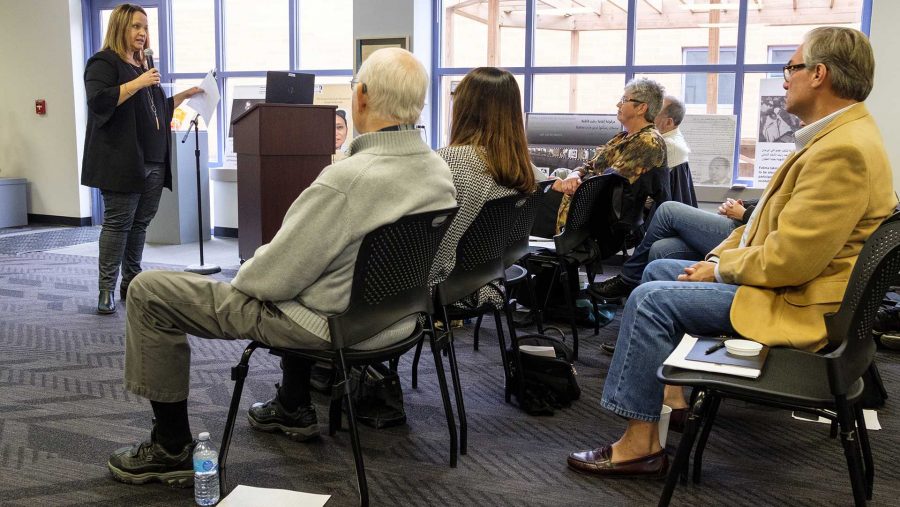 Cathy McGinnis, a probation officer in Iowa’s 6th district of correctional services speaks at an event addressing the challenges individuals convicted of crimes face when reentering society on Tuesday, Oct. 24, 2017. McGinnis addressed the challenges of finding employment and housing with a criminal conviction on one’s record. (Nick Rohlman/The Daily Iowan)

The University of Iowa Center for Human Rights, with the help of volunteer UI professors, has taken higher education to the Oakdale prison through a 10-week speaker series.

The series, running from Sept. 18 to Nov. 20, offers education on a variety of subjects including job-interview tutorials and a course on poetry from World War I.

Members of the Prison Education Working Group gave talks at an event about incarceration at Kirkwood College’s Iowa City campus on Tuesday.

The program’s head, Kathrina Litchfield, found that during her volunteer work at Oakdale, the library lacked the kinds of resources found in public libraries that people often take for granted. Inspired by other programs to bring education to prison inmates, Litchfield and the Rights Center collaborated with the UI President’s Office, the UI Office of Outreach & Engagement, the UI College of Education, the Iowa Department of Corrections, the Iowa Medical & Classification Center, and the Oakdale Inmate Council to start a pilot program.

“Our hope is to continue to expand the series,” Litchfield said in an email to The Daily Iowan. “Inviting faculty from disciplines all across campus and to prepare students for what we hope will become an accredited program, leading toward a degree.”

Litchfield said if the UI could offer on-site course credits toward a bachelor’s degree for incarcerated students, it would be the largest flagship public university in the country to offer it. Other universities that offer course credits are private schools such as Grinnell College.

“Some of the faculty I admire most on this campus have been involved in prison-education programs here in the state of Iowa,” Kenneth Brown, associate dean of the UI Tippie College of Business, said in an email to The Daily Iowan. “The evidence that education helps prepare inmates for release and helps them settle back into productive lives is really compelling. I want to be part of that solution.”

The pilot program requires 100 percent attendance to complete, as well as a written letter of reflection at the program’s end.

“I hope the students enjoy the experience, learn about important topics, perhaps get motivated to go back to college in the future if that is something they want to do,” Mitchell Kelly, a clinical professor of education, said in an email to the DI. “I hope to personally learn from the students and have some fun.”

Research conducted by nonprofit organization RAND found that inmates who participate in correctional education programs had a 43 percent lower chance of recidivating than those who did not.

The nonprofit also found that the 2008 recession led to an overall 6 percent decrease in states’ correctional education budgets between fiscal 2009 and 2012 and a larger effect on states with large and medium prison populations — a 20 and 10 percent decrease, respectively.

“Consider that education is a human right,” Litchfield said. “The effects make our whole community stronger.”