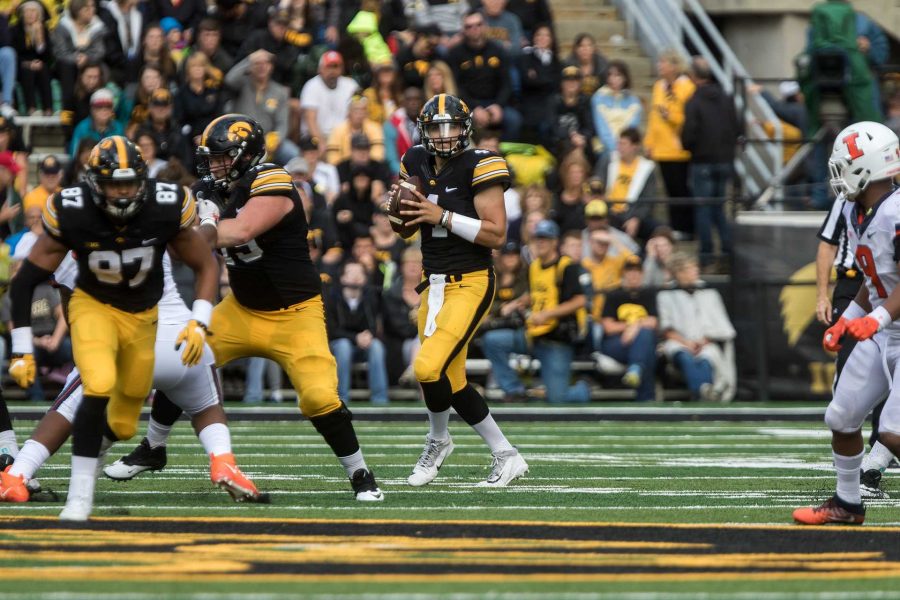 Throw records out the window this weekend, because it’s trophy season once again.

Iowa (4-3) squares off against Minnesota (4-3) in a 5:30 p.m. contest on Saturday — a must-win to keep Floyd of Rosedale but also a must-win to help keep Iowa’s ship from sinking.

Ask any of the players, and they’ll say that any game is a must win — this one, however, remains a very winnable contest heading into a gauntlet of a daunting two-game stretch.

“I think if there [are] any musts, it’s just that we have to get better,” quarterback Nate Stanley said.

That’s the consensus after Iowa dropped its third Big Ten game in four tries on Oct. 21 against Northwestern.

In the 17-10 overtime loss to the Wildcats, the Hawkeyes couldn’t top the century mark in the running game for the third time this year.

However, as of Tuesday afternoon, the players agreed their first few days of practice this week were some of the best they’d had all season long.

“Yeah, they really practiced well,” head coach Kirk Ferentz said. “There are examples of where they practice well and don’t show up and play or vice versa, but I thought they were better. The most important thing for us, quite frankly — and it’s true of most teams — but where we’re at right now, every practice is an opportunity for our team to grow and get better. We’re clearly not there, or we wouldn’t have gone through three losses like we have.”

Even with Iowa’s offensive woes, the Hawkeyes and Gophers have many similarities in their offenses’ effectiveness.

Iowa ranks sixth in the Big Ten with 26.1 points per game, and Minnesota ranks fifth, scoring 27.3 per game. The Hawkeyes have scored 24 touchdowns this season. The Gophers have one fewer touchdown on the season.

RELATED: By the numbers: Minnesota

“They’re physical,” Stanley said. “They come and play hard, mix some stuff up, and try to confuse us.”

The sophomore said Minnesota will try to attack Iowa through the blitz, just as other Hawkeye opponents have this season.

But Minnesota might be able to cause pressure with its front four.

“I think their D-line is pretty good,” offensive lineman James Daniels said. “No. 96, their starting nose, last year he was the hardest person I blocked. This year, he’s even better … he can push, pull, rip — he has a lot of moves, and that makes him hard to block.”

Daniels was referring to Steven Richardson, who recorded 11 tackles for a loss last season and 7 sacks. Including this season, he’s also forced a fumble in each of his four seasons with the Gophers.

He hasn’t notched a sack this season and only has 1.5 tackles for a loss through five games, but anything can happen in a trophy game.

Especially with a pig at stake.

Iowa is 1-0 in trophy games this season, and the Hawkeyes hope to keep another piece of hardware in Iowa City for another season.