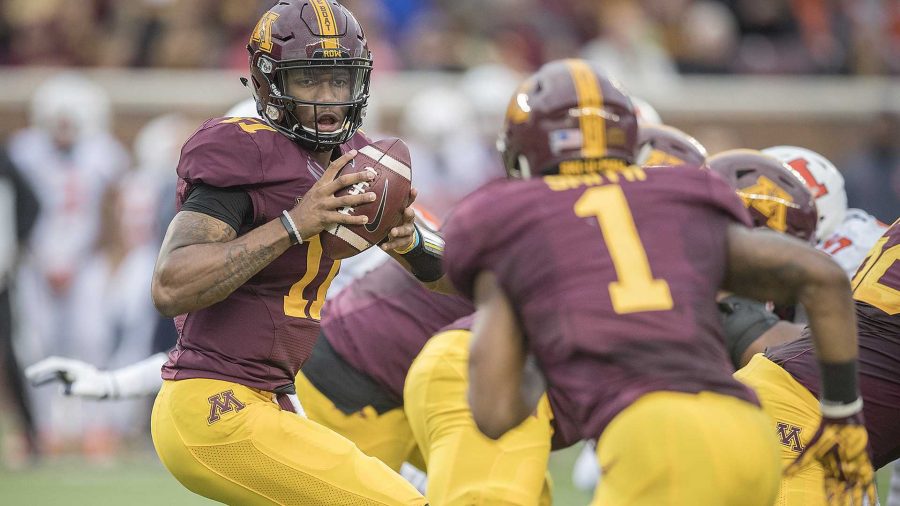 With a struggling offense, the Iowa defense has been forced to step up.

This week will be no different. Coming into this weekend’s matchup, Minnesota boasts one of the most potent rushing attacks in the Big Ten.

The Gophers have three backs who have rushed for more than 250 yards this season, and they are one of two teams in the Big Ten that have three running backs that are in the top-25 for yards in the conference.

“They all bring their different flavor, but they’re pretty much all downhill guys,” Iowa linebacker Bo Bower said. “They can move, too. They’re very good backs.”

The leading rusher this year for P.J. Fleck is junior Rodney Smith, who last week in the win against Illinois ran for 103 yards on 19 carries.

With all the depth this year in the backfield, Smith’s role has been limited, but his stats from 2016 show he could give the Iowa defense problems.

The second part of the trio is junior Shannon Brooks. This season, Brooks has rushed for 329 yards on 70 carries and 5 touchdowns, and all five of Brooks’ scores have been 2 yards or fewer.

RELATED: By the numbers: Minnesota

The third option for Minnesota is Juco transfer Kobe McCrary. Unlike Brooks and Smith, McCrary is more of a fullback-type at 240 pounds, and he has rushed 51 times for 268 yards and 4 touchdowns.

In last year’s matchup at Minnesota, the Hawkeyes were able to frustrate the Gopher offense, limiting it to 7 points and 102 rushing yards.

With the return of star linebacker Josey Jewell, the Iowa defense has all hands on deck to restrain the versatile Gopher running game.

All three of Minnesota’s running backs saw action in last year’s meeting. It will be interesting to see how the Hawkeyes’ defense uses the strategy from that contest to do the same thing this time around in Iowa City.

In last weekend’s loss to Northwestern, the Iowa defense was unable to force any turnovers, which has been a key focus this week in practice.

“We were really close on a few big plays,” defensive end Parker Hesse said. “Close on interceptions, close on sacks, stuff like that where we need to improve our speed and precision on to take advantage of those things.”

P.J. Fleck’s teams are known to have conservative offenses.

Last year at Western Michigan, Fleck’s offense was second in the nation in time of possession, compared with Minnesota this year — ranked 25th in the country.

The Gopher offense likes to be patient, and the Iowa defense will need to jump at any chance to take the ball away.

Minnesota’s depth on the offensive line has been an issue because of injuries, but that doesn’t stop the O-linemen from ranking at the top of the conference in various departments.

The offensive line for the Gophers has allowed only 4 sacks this year, fifth in the nation and first in the Big Ten. It has also allowed 20 tackles for loss, ranking first in the country.

A proficient O-line meets a defensive group that has given up more than 22 points just once this season and has been solid at hindering prolific offenses. In a rivalry game, anything can happen.

Coaches and players on both sides are eager to battle in the trenches on Saturday.

“So all that stuff lines up, and then certainly to be back home in Kinnick will be good; a night game in Kinnick is always very, very special,” Iowa head coach Kirk Ferentz said. “Now with Floyd at stake on top of that, that’s an extra bonus. I know both teams are excited about that.”