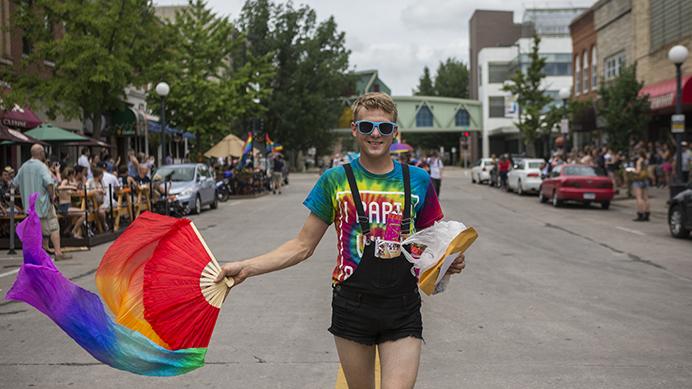 An IC Pride parade participant marches down Dubuque Street on Saturday, June 17, 2017. The parade is part of Pride Month, a celebration of the LGBTQ community and commemoration of the Stonewall riots of 1969. (Ben Smith/The Daily Iowan)

Iowa City received a perfect Municipal Equality Index Score, one of only 58 cities in America.
By Brooklyn Draisey
[email protected]

Iowa City continues to be one of the most LGBTQ-inclusive cities in the country, earning a Municipal Equality Index Score of 100 out of 100.

Iowa City is one of only three Iowa communities and 58 cities in the country to receive a perfect score, along with Cedar Rapids and Davenport. The index is the only national evaluation of municipal law, policies, and services in terms of LGBTQ inclusion.

Iowa City has been evaluated in this index since 2013, when it received a score of 90, and it has registered perfect scores every year since. The city, along with 505 others, were scored through five categories: nondiscrimination laws, municipality as an employer, municipal services, law enforcement, and relationship with the LGBTQ community.

“I think it shows that yet again Iowa City has proven that its municipal-level ordinances are hugely progressive in support of our queer community,” UI Spectrum Outreach Director Alex Bare said. “It’s wonderful that the city is getting this recognition again.”

The Iowa City government has worked hard to make both the city and its government accessible to the LGBTQ community, City Councilor Rockne Cole said. He noted it’s not only the measures the city has put in place that make it so inclusive, it’s the participation all people are allowed to have in the governing process.

“It’s not only the policies, I think it’s also the spirit we operate in, which is we welcome and recognize the value in all of our residents both in terms of policymaking, in access to City Hall, in terms of the type of community we want to live in,” Cole said. “I think these are precisely the things that we are proud of.”

There are a number of city policies and decisions that create an inclusive atmosphere, Cole said. LGBTQ residents are registered as a protected class in city ordinances, and the police staff LGBTQ community liaisons to foster good relationships between law enforcement and the LGBTQ community.

“We’re an area that queer people can go knowing that there will be resources for them to be successful,” Heid said.

One program Cole said he hopes will bring in more participation from the whole community is a participatory budgeting process. With this, Iowa City residents will have a say in what a portion of the city budget goes for. The city staff is evaluating different options to correctly do a process such as this, and Cole said a proposal should be available in four to five months.

He noted that although the city has a perfect score, that doesn’t mean officials can stop there.

“We don’t want to rest on our laurels or our past success,” Cole said. “If there are things we’re doing that we’re blind to that may affect the LGBTQ community, we still want to be able to address it. We don’t want to settle for a perfect score, we want a better score so we can continue to provide leadership in that important area.”