Ethan Lipton & His Orchestra touch down at Hancher 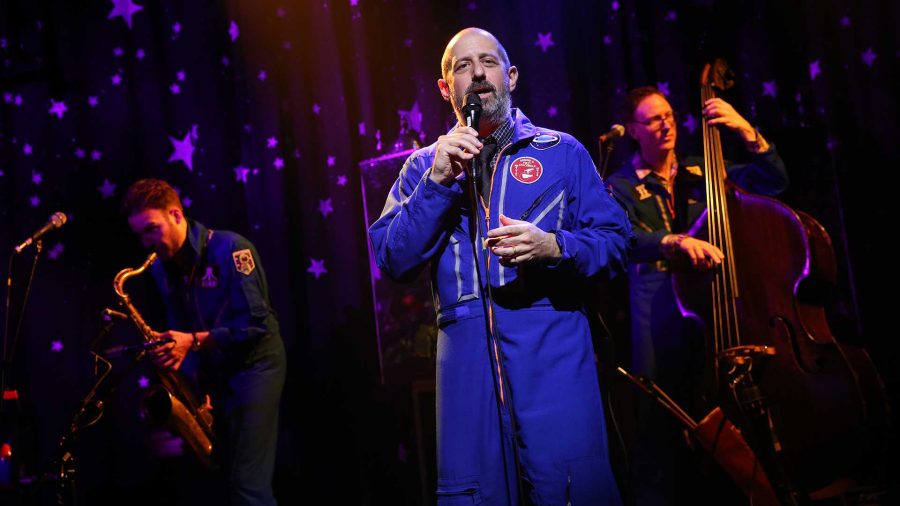 The blue janitorial jumpsuits are subdued underneath a twinge of purple light. Glow-in-the-dark stars are scattered across the back wall as in the bedroom of a child. The set draws a fine line between simple and imaginative.

“I have always loved music from colorful storytellers, and I brought that into my band,” Ethan Lipton said. “We have melded various genres together into one particular sound that is rooted in American music.

“We are always trying to make sure we are pushing forward and charting new territory.”

Ethan Lipton and His Orchestra perform cabaret–lounge-style music, but the lyrics have a satirical element that transcends genre. The group will play at Hancher at 7 p.m. Friday and Saturday, performing two different sets: “The Outer Space” on Friday and “No Place to Go” on Saturday.

“They poke fun at relationships, politics, and various aspects of culture,” said Hancher Marketing and Communications Director Rob Cline. “There is always an edge to their songs even though they are performed in a laid–back, club–like way.”

As a playwright, Lipton does not write conventionally. From Western musical comedies, to critiques of American workplaces, to security guards binge-watching Internet videos of cats, to rented spaceships, Lipton goes wherever his imagination takes him. His productions have been performed in historic venues around the world.

“If an idea feels sort of preposterous, or if I cannot solve it within the next couple of minutes, then I get excited,” Lipton said. “I love big metaphors. Those work well because I like to also talk about the ‘everyday.’ I am interested in talking about how things feel more than how things are.”

Hancher presented the Obie-winning production “No Place to Go” at the Mill, 120 E. Burlington St., in 2014, when the original auditorium had been flooded and the facility demolished.

The play is about a man whose information-refiner job is outsourced to Mars. The plot of the play revolves around his indecision about leaving home. “No Place to Go” has a thematic relevance that relates to the realities of joblessness, careerism, and corporate America. It is a simple story about a man losing his place in the world. And in the Solar System.

”The music in the production is quite similar to his individual records but has woven what amounts to be a one-man musical that is funny, and touching, and brilliantly put together,” Cline said.

“If you have lived in New York long enough, you have fantasized about what it would be like to leave it,” the Times wrote in an article titled “Review: ‘The Outer Space’ Is the Place, for an Unsettled Couple.”

“Mr. Lipton’s show suggests that trading one address for another doesn’t mean that you leave your problems behind. You might even pick up a few new ones.”

“It is about people trying to navigate a big transition in life together,” Lipton said.

This score is cheerful and vibrant musically but dark and serious lyrically. Ethan Lipton and His Orchestra play alongside him on stage.

Their collaboration with Lipton has created a score with various different, “musical texture[s]” that are evocative of space. Lipton notes that humor and play are a vital component to the creative process, both musically and literally.

“He is a strikingly good lyricist, which is one of the reasons we think he is a good fit for Iowa City, a writers’ town,” Cline said.

“He performs in such a way that he catches you up in the goofiness while also breaking your heart with the lyrics.”

“It will feel very intimate and very club-like,” Cline said. “We will make it both intimate while maintaining the razzle-dazzle of show business.”

There will not be a set for the performances. The production will be streamlined to enhance the two major concerns: music and storytelling.

“This piece in particular taps into that experience of listening,” Lipton said. “Because the play takes place in space, the audience will have to do a little bit of work. It rewards the audience that likes to lean in and listen.”

His productions deal with issues such as depression, divorce, unemployment, and unrequited love that can most certainly fester into a midlife crisis. Lipton gives an honest take on the vulnerabilities that make us human and the strength that make us one of a kind.

“I want people to recognize themselves and have an acknowledgment of their own struggles to make it through the day,” Lipton said. “I like to see my problems presented to me in a way that I have not seen before, so hopefully that is the experience people have.”

Lipton enjoyed his last performance in Iowa City. He called the audience “incredibly smart,” with a sense of appetite to reconcile with and connect to “existential things.”