Monica Lewinsky calls for compassion as remedy to cyberbullying

Monica Lewinsky delivered a lecture yesterday evening titled “The Price of Shame.” It recounted Lewinsky’s personal experiences and emphasized the dangers of cyberbullying. 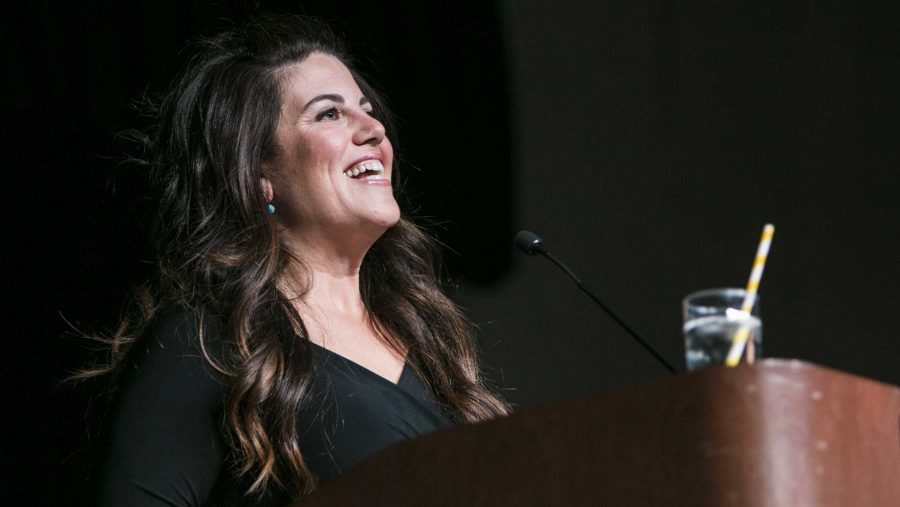 Monica Lewinsky delivered a lecture Tuesday recounting her experiences and addressing the dangers of cyberbullying. During the event, hosted by the University of Iowa Lecture Committee, she spoke to a packed audience in the IMU Main Lounge about the importance of compassion and her work to stop bullying.

Lewinsky faced public scorn at age 24 for her involvement in the infamous 1998 affair with former President Bill Clinton. Clinton’s subsequent denial of the incident resulted in a congressional push for impeachment and solidified Lewinsky as a target of the media. Her unique experience as the victim of the following public humiliation and cyberbullying inspired her to work to combat those issues.

Lewinsky is now a social psychologist, activist, and public speaker raising the awareness of and advocating against the cyberbullying crisis. Her lecture at the UI shared a title with her popular 2015 Ted Talk “The Price of Shame.” She is also a contributor to Vanity Fair and an ambassador and strategic advisor to Bystander Revolution, an anti-bullying organization.

UI Lecture Committee member Abby Simon introduced Lewinsky before her lecture. “Ms. Lewinsky is an individual recognized by most but truly understood by few,” Simon said.

During the lecture, Lewinsky touched on the ways her life was affected by the aftermath of the 1998 scandal with Clinton. She described how her life suddenly became public and her photo was plastered across media. As a result of the scandal, she was ridiculed, marginalized, called names, objectified, and harassed.

Lewinsky identified cyberbullying and public shaming as a dangerous issue. She calls for compassion as a remedy to people affected by harassment and urged the audience to be an up-stander in online situations as well as real life.

UI student Grace Scott said she attended the event in order to hear more about Lewinsky’s experiences in an educational setting. Scott said the moments when Lewinsky talked about empathy as a tool to defeat shame impacted her the most.

Lewinsky was one of the very first people to be a target of cyberbullying, due to the emergence of the Internet around 1998. Lewinsky pointed to the Internet’s nearly limitless reach as a factor that can amplify the harassment of individuals. She also discussed the topic of gossip and click-bait news using the humiliation of others in order to gain more views and ad revenue.

“It was hard for me to realize that every click I make can encourage the humiliation of others,” UI student Olivia Thier said. “She has inspired me to concentrate on spreading compassion, rather than mindlessly dehumanizing others with my clicks.”

“Monica’s words about using the Internet not as a way to spread gossip and hate, but as a way to humanize issues and reclaim misconceptions skewed by media with personal stories really resonated with me,” UI student Bianca Robles said. “Especially because she applied it to the reason she’s decided to share her story after a decade of silence.”

Note from the editor: According to the media guidelines sent to the DI by the University Lecture Committee, Lewinsky asked the press to not record and photograph any time after three minutes from the beginning of the event. She also requested her direct quotes about cyberbullying be unreported, as she believes it is off the record and her “intellectual property.”

The event was free and open to the public.