Women’s basketball is small in numbers, mighty in spirit

The loss of all-time leading scorer Ally Disterhoft stings, but expectations are the same for Hawkeye women’s basketball. 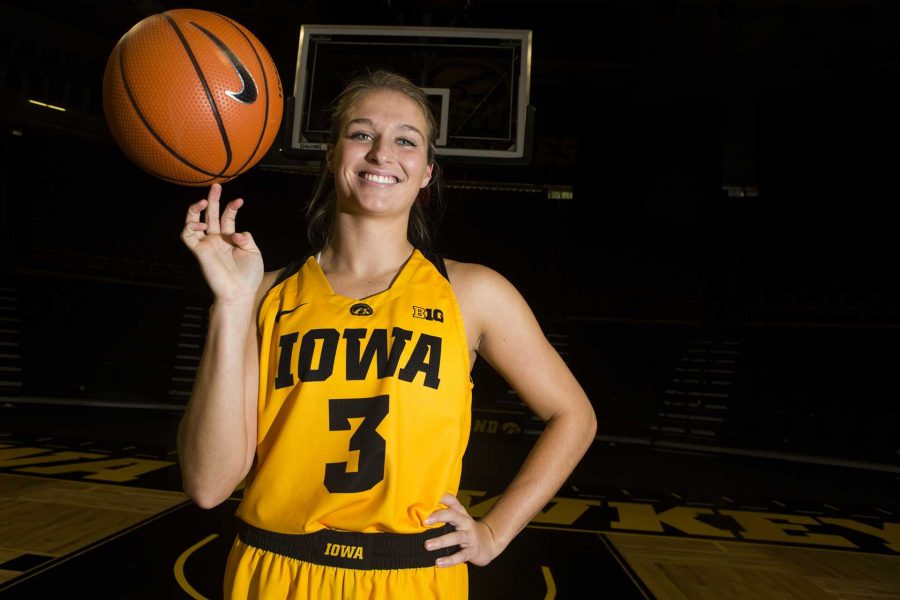 Iowa sophomore guard Makenzie Meyer poses for a portrait during the women's basketball media in Carver-Hawkeye Arena on Monday, Oct. 23, 2017. The Hawkeyes will open up an exhibition game against Minnesota State-Moorhead on Nov. 5 at 7 p.m. in Carver. (Joseph Cress/The Daily Iowan)

With only 11 players on the roster of the women’s hoops team, many fans and media seem to be concerned about the lack of depth this season.

At the beginning of her press conference, head coach Lisa Bluder made it known that despite small numbers, “this group is mighty in spirit.”

“We have 11 players on our roster, but I feel that is all the pieces we need to compete,” she said.

Two seniors, three juniors, three sophomores, and three freshmen make up the roster, which is a healthy mix of experienced and youthful talent.

Davis set to bounce back

After tearing her ACL against Michigan in February last season, sophomore guard Tania Davis is way ahead of schedule, Bluder said, and she should be good to go for the Iowa exhibition on Nov. 5.

Before being shut down for the season, Davis averaged 10.9 points and 4.3 assists while starting in all 23 games.

“She just has an ability to get to the rim and shoot over people who are much taller than her,” Bluder said. “She has no fear of going in there.”

No games off in nonconference

The nonconference schedule will be no cakewalk for the Hawkeyes.

The team will play at Northern Iowa and Iowa State and play host to Drake. The Hawkeye Challenge, which is played during Thanksgiving week, will consist of three teams that were in last year’s NCAA Tournament: Quinnipiac, Missouri, and Western Kentucky.

“I think a very challenging schedule for our team,” Bluder said. “Our team is eager to get the season underway.”

Iowa is scheduled to play Florida State in Carver-Hawkeye for the Big Ten/ACC Challenge. The Seminoles were ranked as high as seventh last season.

“She was a four-year starter for us, just an amazing basketball player, and obviously a tremendous student as well,” Bluder said. “But one person is not going to replace Ally. Everybody’s got to get better. For us to replace Ally, it’s got to be a group effort.”

Preseason All-Big Ten junior forward Megan Gustafson will be the most likely candidate to fill the scoring void left by Disterhoft’s departure. Gustafson led the team in scoring, rebounding, and field-goal percentage, averaging a double-double with 18.5 points and 10.1 rebounds per game while shooting 64.7 percent from the field.

With the return of Davis, the Hawkeyes boast one of the most intriguing guard groups in the country, with Davis and sophomores Makenzie Meyer and Kathleen Doyle.

Known for her 3-point shooting, Meyer’s comfort on the court has skyrocketed with a jump in playing time, her coach said.

Doyle took a back seat in the scoring department last season — she was more of a leader and making plays for her teammates. This year, Bluder says, she expects Doyle to look to attack the basket and score more.

While Doyle and Davis are both traditional point guards, Bluder thinks their games will complement each other well when they’re on the floor together.