Johnson County received the Gold award from SolSmart, an organization that rates localities on the accessibility of solar energy. 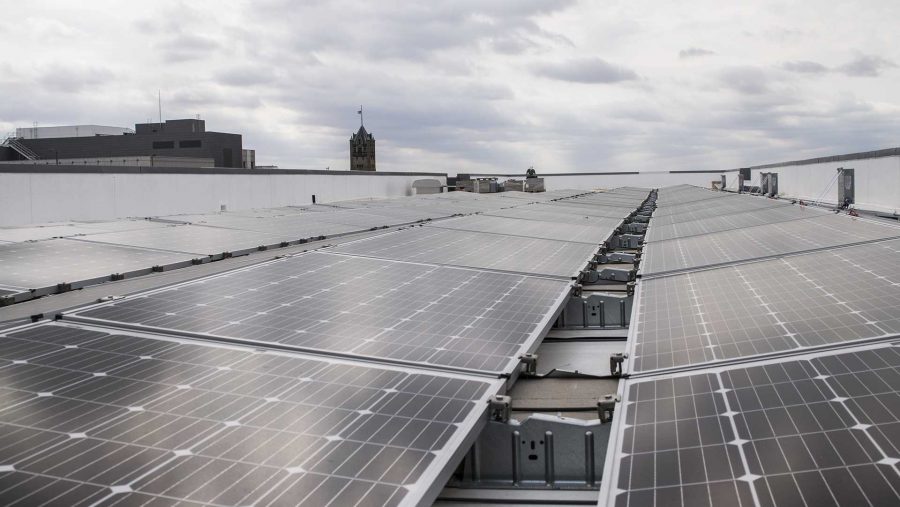 Clean energy has been making its mark in Johnson County, and the U.S. Department of Energy has taken notice.

On Oct. 19, Johnson County was awarded the Gold Award by SolSmart, a foundation run by the U.S. Department of Energy that promotes making solar power more accessible to home and business owners.

The foundation rates localities on a point system, and those with easier access to processes, such as application and permitting for solar array construction, earn more points.

Johnson County is the first in the Midwest to receive a Gold Award.

County Supervisor Mike Carberry said he is proud of the county and all the work that has been done to make clean energy more accessible.

“We’ve cut a lot of the red tape, the application and building process, and we’ve streamlined it so it’s easier for the home or business owner,” he said.

Solar power has become a big business in the state, he said, which has helped the county make the energy so accessible.

“Solar is one of the fastest growing businesses in Iowa,” Carberry said.

Beyond Johnson County, many other Iowa locations received SolSmart awards, among them Linn County and Ames (silver), and Perry (bronze).

Becky Soglin, the sustainability coordinator for Johnson County, said she gives credit for the initial push for solar use to the supervisors.

“The Johnson County Board of Supervisors laid the groundwork for this to happen,” she said.

Soglin said she is very pleased with the advances the county has made in promoting solar power over the past few years.

“We’ve issued around 70 permits in the past six years or so; prior to that it was close to zero,” he said.

Bombei also noted that the application process, which in the past would have taken weeks to complete, has been streamlined for ease of application, making the process much less confusing for the consumer.

“We’ve decreased the amount of time it takes to issue a permit, focusing on around three days or fewer,” he said.

While much of the process has been made easier, there are still a few obstacles that prevent further accessibility to solar power, Soglin said.

However, Soglin said, many people still don’t have enough information to understand what incorporation solar power can do for their home or business.

“There’s a little bit of a learning curve, so we’re trying to share information on that as a county,” she said.

Bombei said that along with not enough information, many people just don’t like the look of solar arrays or panels on their property.