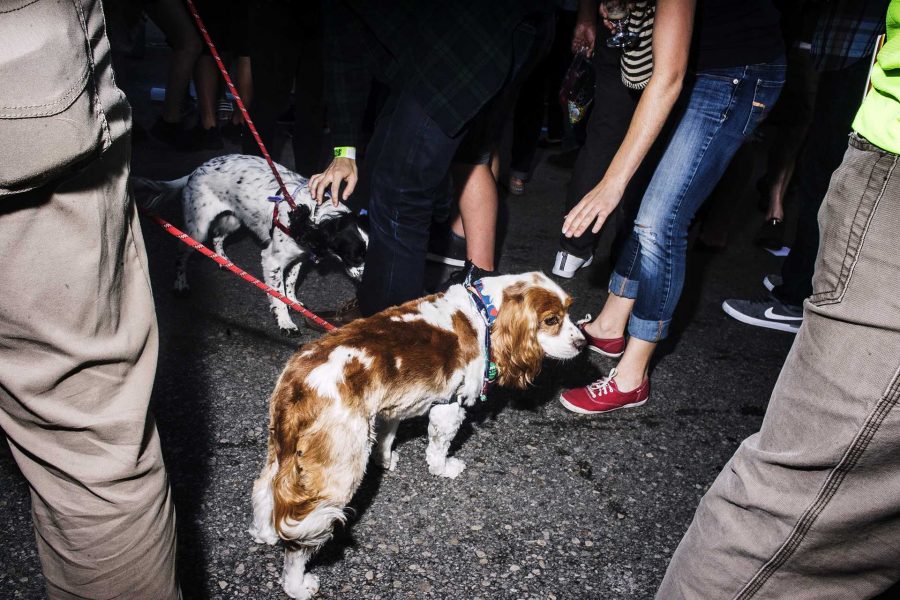 Several guests at the Northside Oktoberfest brought their pets on Saturday, Sept. 30, 2017. The dogs were especially popular with the crowd. (James Year/The Daily Iowan)

Iowa City and Coralville area dog owners and their pets gathered at the Thornberry Off-Leash Dog Park on Sunday afternoon for the first Doggie Health Fair, hosted by the Iowa City Parks & Recreation Department in collaboration with the Friends of the Animal Center Foundation.

The Thornberry Dog Park, which opened in 2006, features a pond for dogs to cool off in as well as a section for small dogs, larger dogs, and dogs that don’t get along well with others.

Dave Bourgeois, the Thornberry Dog Park coordinator for nine years, said the park offers a safe off-leash environment in which dogs can socialize with other dogs.

“If you’re in the city, you have to have them on a leash, and very few people have the property to let dogs off the leash in their own back yard,” Bourgeois said.

The health fair was Bourgeois’ brainchild, born out of his desire to thank the dog owners who purchase tags to use the dog park. For several years, the city handed out a free calendar featuring pictures of dogs at the park, but Bourgeois wanted to do something more.

“Earlier in my career, I was the athletics director at for the Jewish community centers in Chicago, and we had a huge health fair,” Bourgeois said. “I thought, ‘Why can’t we do this for dogs?’ ”

Bourgeois’s idea was brought to life with the help of Christina Kimerle, the executive director of the Friends of the Animal Center Foundation, a nonprofit that raises funds to fill the funding gaps at the animal shelter. Kimerle organized the event, which featured 12 vendors, covering everything from dog nutrition, adoption information, veterinarians, grooming services, trainers, and even dog photographers.

“This is a promotion in dog health,” Bourgeois said. “We’re trying to bring together anything that might represent this idea of ‘dog health.’ Pet owners are constantly accessing information at the vet and grocery stores with pharmacies that carry pet-related products. They’re constantly up against what’s best for their dog.”

Kimerle wanted this to collaborate between the animal shelters and the dog park to be an opportunity for pet owners to have access to the information they need to keep their pet healthy.

“It’s a great opportunity for dog owners to learn about different vendors and services available in our community,” Kimerle said. “It was a huge success; we had a total of 150 dogs come through.”

BJ Wagner, a volunteer representing Therapy Dogs of Johnson County at the fair, said his group wanted to participate in the fair to get information out about its program, which tests and certifies therapy dogs. These therapy dogs make many healing visits around the community, from de-stressing university students to interacting with kids at library readings.

“I was excited that this was an event my dog could come with me to,” Wagner said. “The people love it, and the dogs love it.”

Tim Graham, the store leader at the new PetSmart, participated in the health fair as a vendor, along with wife Katie and their dogs Harley and Chili.

“Participating in events like this is just what we do,” Graham said. “We love pets, that’s our whole business. Pets make us better people.”