Breaking the silence of children affected by violence and terrorism 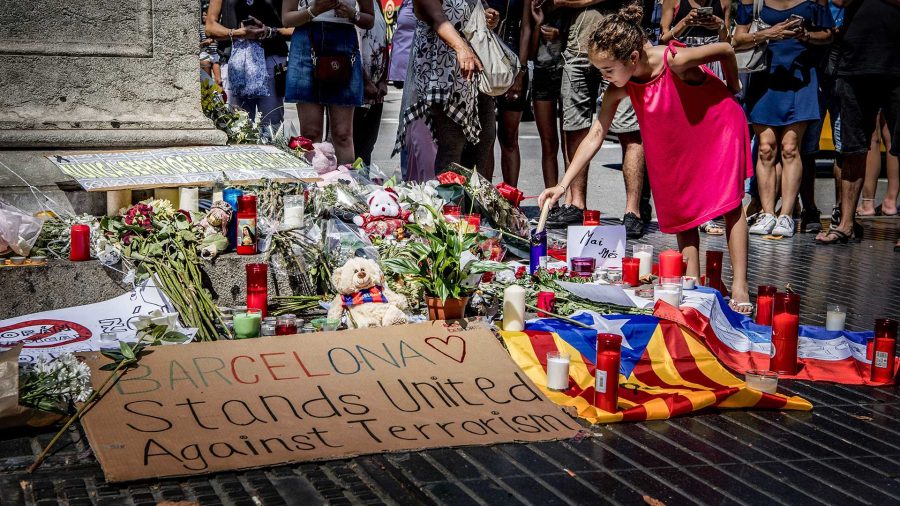 Flowers, messages and candles placed at a memorial Aug. 18, 2017 in Barcelona after the terrorist attack of The Rambla in Barcelona, Spain. The attack killed 14 and left more than 100 wounded. (Robin Utrecht/Abaca Press/TNS)

A panel discussion focused on how terrorism and violence affects children worldwide and how these issues are reported on by the media took place Sunday morning at the Iowa City Public Library.

Maureen McCue, a UI adjunct clinical assistant professor of public health, was inspired to create this series after realizing that youth from around the world who are affected by violence do not have the same voice that those in the U.S.

“Why is it that when a terrorist event happens in England or the U.S. and children are affected, we learn all about them?” McCue said. “We learn their names and their interests, but when it’s children in other parts of the world or minorities, they have no personality, they’re invisible. It’s time we make these children visible.”

Jackie Majerus, the keynote speaker at the discussion and former UI School of Journalism and Mass Communication graduate, attempts to give young journalists all over the world a voice through a program she founded called Youth Journalism International.

It began as a group in Connecticut, but the organization quickly attracted interest from around the globe. Majerus said it is the only international organization of its kind for young people to share their stories through journalism.

“Journalism is at our core,” Majerus said. “But there’s more to it than that; we’re building bridges of understanding over borders of race, religion, nationality, and all those artificial things that keep people apart from each other.”

The young writers cover pressing issues worldwide, such as terrorism, violence, bombings, and massacres. At the event, Majerus read several excerpts from students’ pieces on such issues.

“These are smart, ambitious kids that are going to be leaders in their countries, and if you’ve got future leaders from all over the world becoming friendly and having an open attitude, it’s amazing what a much more peaceful future we’re looking at,” Majerus said.

One young writer, Latif Behroz, is a teenager from Kabul, Afghanistan, who attends Scattergood School in West Branch. At the discussion, he shared an article he wrote, “Hope for Peace,” about the continued wish for an end to violence in his home country.

The discussion also focused on how the effect of violence on children should be covered in the media.

“Even in the midst of us trying to get the story accurate and first, we need to pause and consider the consequences of what we’re doing, and those consequences are even more severe when it comes to children,” said panelist Jeff Charis-Carlson, a Des Moines Register writer.

McCue also stressed the importance of a world in which children are a priority, especially when considering policies.

“We as a society don’t question where our policies are going; we need to ask what effect will these policies have on our children,” she said.

Majerus agreed that children all over the world need to be given a voice to ensure a future that is livable for them.

“Young people have such big hearts, big ideas, and big energies, and if we let them have their rightful place in charting the future that is theirs to lead and theirs to inherit, I think we’d be in so much better shape,” Majerus said.