Cordell Pemsl got his body right this off-season, focusing on ending poor eating habits and hitting the gym. 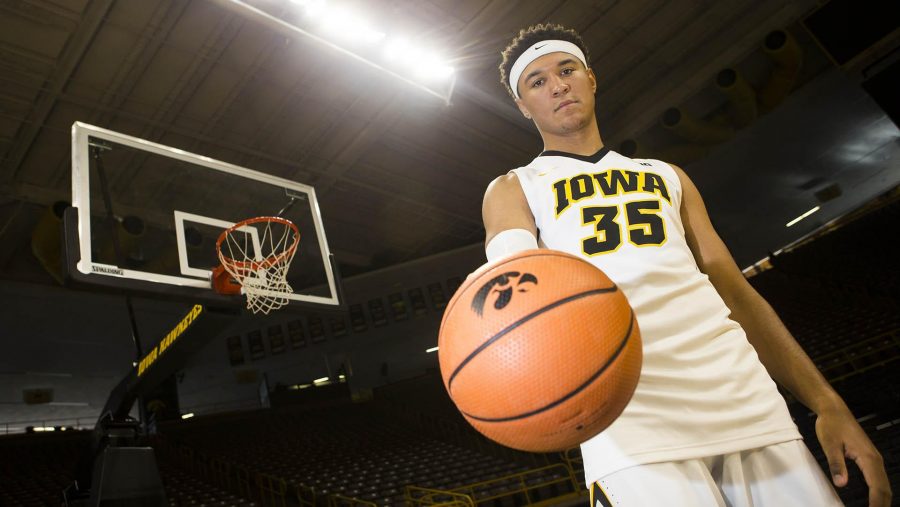 Iowa forward Cordell Pemsl poses for a portrait during men's basketball media day in Carver-Hawkeye Arena on Monday, Oct. 16, 2017. The Hawkeyes open up their season with an exhibition game against William Jewell College on Friday, Oct. 27. at 7 p.m. in Carver. (Joseph Cress/The Daily Iowan)

Cordell Pemsl gets some weird looks on campus as he walks around with a one-gallon jug full of water.

Pemsl’s water jug might not be the only thing drawing in the looks, especially when Iowa tips off its season later this month.

The Hawkeyes boast a new-look Pemsl, whose weight dropped from 256 pounds to 235.

“This is the best I’ve felt since I was a sophomore in high school,” he said.

The sophomore forward underwent surgery for a sports hernia in May, and it sidelined him from basketball activities for a couple of months.

His recovery went smoothly, and after he slimmed down, he felt like a new player.

“It’s like putting a 20-pound vest on and trying to go dunk,” Pemsl said on his old weight. “Taking that off, and being able to see how much more explosive you can get, it’s really cool.”

The surgery helped to solve a nagging groin issue, but it’s Pemsl’s change in his diet that brought about the biggest transformation.

Pemsl met with the team nutritionist throughout the season, but she advised him not to make any major diet changes midseason, since he was already playing at a level he was content with — at the time.

He averaged 8.9 points and 5 rebounds per game last season while establishing a new single-season record for highest field-goal percentage in Hawkeye history (.617).

The new-look Pemsl is faster and more explosive in all aspects of his game.

“I think he’s playing the best basketball I’ve ever seen him play,” head coach Fran McCaffery said. “A lot of times when guys trim down like that, they don’t maintain the strength that they had or the physicality, and he’s done both. He still plays strong, and tough, and physical.”

Pemsl isn’t the first Hawkeye under McCaffery to undergo a significant revamp in health during an off-season.

Peter Jok, who graduated this spring, ended up being a role model in Pemsl’s weight loss — he went through a dramatic body transformation himself. By his final season in a Hawkeye uniform, Jok made a point to focus on his diet.

Jok was one of the first people to congratulate Pemsl on his weight loss.

Maintaining that balance of boosting his strength while slimming down proved to be one of the biggest challenges for the Dubuque native.

Pemsl lifted four days a week with his teammates after he recovered from surgery to maintain and eventually build upon his strength.

The biggest change came in his diet, and that’s where the water comes in to play.

Pemsl’s goal was to drink a gallon of water a day — rather than drink Sprite, his favorite soda — and he’s stayed true to his word for the last four months.

As far as food goes, he limited his portion sizes and focused on healthier food groups.

Pizza, one of Pemsl’s go-to choices, turned into an every-other-week meal rather than a weekly or sometimes daily option.

His old eating habits earned him a few nicknames from his teammates.

Some call him Z-Bo after 260-pound NBA forward Zach Randolph, but another more universal name found its way around the locker room.

“I don’t know if he’ll like me saying this, but we called him ‘fat boy’ last year,” sophomore point guard Jordan Bohannon said. “It is kind of mean, but we’re all making fun of each other. He really worked on [his weight] this summer. We got to give him credit for it.”

Even with the new look, Pemsl doesn’t foresee that nickname going away any time soon.