A vigil was held on the Pentacrest Tuesday evening for campus sexual assault victims in conjunction with the one in Washington, D.C. 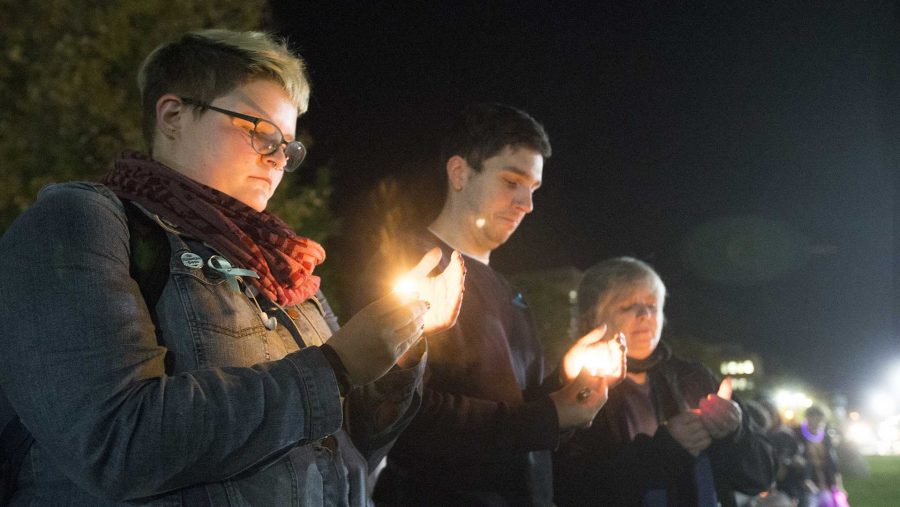 From left: UI senior Ellen Kuehnle and Women's Resource and Action Center employees Cody Howell and Laurie Haag hold candles during the UI Sister Vigil for Survivors of Campus Sexual Assault on the Pentacrest on Tuesday, Oct. 17, 2017. The event included letter writing to Iowa senators and the signing of thank you state of Iowa flags to senators fighting the withdrawal of Title IX protections for survivors of sexual assault. (Lily Smith/The Daily Iowan)

Candlelight illuminated the Pentacrest on Tuesday evening, shining through a vigil for victims of sexual violence.

The vigil, one of many happening at universities across the country, was held in conjunction to one Thursday night in Washington outside the U.S. Department of Education.

Along with candles, 29 Iowa state flags fluttered in the evening breeze as survivors shared their stories over an open mic. Each flag was representative of a senator who has spoken out against proposed Title IX revisions.

University of Iowa students Kalena Meyer and Emmalyn Brown, the organizers of the vigil, said it’s important to show support for those affected by sexual assault and harassment, especially in times such as these.

“All of these people gathered here to show that we support the victims,” Meyer said.

Brown said the goal of the evening was to come together as a community.

“It highlights the impact of sexual assault and harassment in the lives of survivors,” she said.

Adam Robinson, the executive director of the Rape Victim Advocacy Program, said he hoped the vigil would help show survivors the immense support on campus.

“It’s events like this, and people showing up with their support, that helps to communicate to victims that they’re not alone,” he said.

Robinson said the proposed revisions to Title IX have spurred more survivors to speak up and tell their story.

“Survivors are refusing to be silent,” he said. “The experiences, and the resiliency of survivors throughout campus, throughout our community, need, deserve, and will fight for a voice.”

Brown will attend the Washington vigil Thursday to participate, deliver the 29 Iowa flags displayed at the UI  vigil, and lobby against the revisions of Title IX proposed by Education Secretary Betsy DeVos.

Title IX prohibits discrimination based on sex in any federally funded educational institution. This includes any type of sexual assault or harassment.

DeVos’s move to revise key elements of Title IX spurred the national vigil as well as the sister vigils across the nation.

Meyer said DeVos’ motion to revise Title IX is concerning because it may deter victims from reporting assault or harassment.

“The message many people are getting from the revisions is that DeVos doesn’t support survivors,” Meyer said.  “It’s a public symbol saying, ‘We do not support victims.’ ”

There are also concerns being raised that the revisions will allow schools to take allegations of assault or harassment much too lightly.

Brown, a survivor of sexual assault, said the way institutions handle allegations has come a long way since her assault, and she fears that the new revisions will be a step backwards in serving justice for survivors.

The vigil, as well as those happening all over the country, intend to make these messages clear, not only to DeVos but to the entire Education Department, event organizers said.

“I’m afraid that it’ll go back to an era where survivors will not be heard and schools will not take cases seriously,” Brown said.