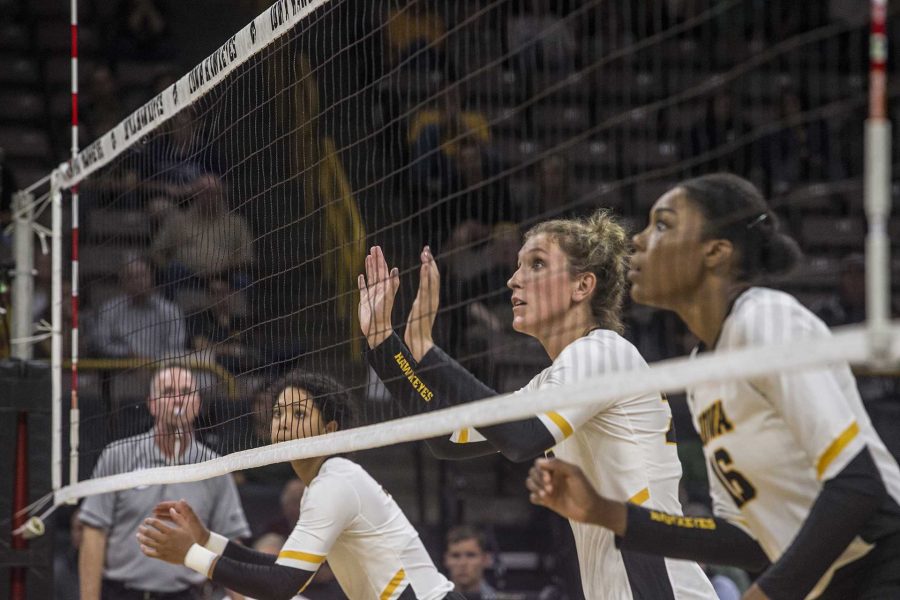 Iowa was swept by No. 6 Minnesota for the second time this season in its first Big Ten rematch.

The Hawkeyes fought the Gophers point-for-point in the first set, which featured nine ties and four lead changes.

Iowa held a 22-19 lead before a 6-1 Minnesota run gave the Gophers the first set.

Both teams recorded attack percentages under .200 in the first set, a testament to the defenses.

The Hawkeyes took that momentum into the second set, starting out strong with a 7-3 lead. However, two momentum-changing challenges led to Minnesota scoring 11-straight points to take the lead, 18-9. Iowa battled back, but it wasn’t enough; Minnesota took the second set, 25-18.

The beginning of the third set mirrored much of the first.

Both teams went point-for-point to start out the match, but with a 7-1 run, Minnesota took the lead. The Gophers strung together points to take the third set, 25-15, and seal the match.

The Gophers held the Hawkeyes to a .079 attack percentage in the third set.

For the match, freshman outside hitter Claire Sheehan and senior middle blocker Jess Janota led Iowa with 9 kills apiece. Janota had a .389 attack percentage, while the rest of the Hawkeyes hit below .200.

Blocking was key for the Gophers — they recorded 13 as a team. Meanwhile, junior outside hitter Taylor Louis had 2 solo blocks for the Hawkeyes and had 3 of the team’s 8.

“I thought we competed so well for the first set,” head coach Bond Shymansky said in a release. “We just need to close it out there at the end when we get the chance. I thought we carried that momentum over into the second set pretty well, but the wheels came off in one rotation. We gave up 9-straight points. You can’t do that against any team. Whether you are playing the top team in the league or the bottom team, you are going to lose a set doing that, but I think what we really lost was our momentum.”

While some defense was strong for the Hawkeye, Shymansky said it’s still a point of emphasis moving forward.

“We didn’t get our back-side swing going well enough, and some of that was because we had trouble passing,” Shymansky said in a release. “We keep looking for answers. We are using a lot of players in the lineup and subbing people in trying to give us a spark or ignite our team. In the end, we just kind of faltered and lost our mojo [Sunday].”

Also, shutting down key parts of the Minnesota defense was important, but by keying on a single player, it presents opportunities for other opponents to emerge.

“We set out to shut down Jasmyn Martin,” Shymansky said in a release. “That matchup last time really killed us, and she hit .000 today, so that was really good. But when you are a top-five caliber team, you have other options.”