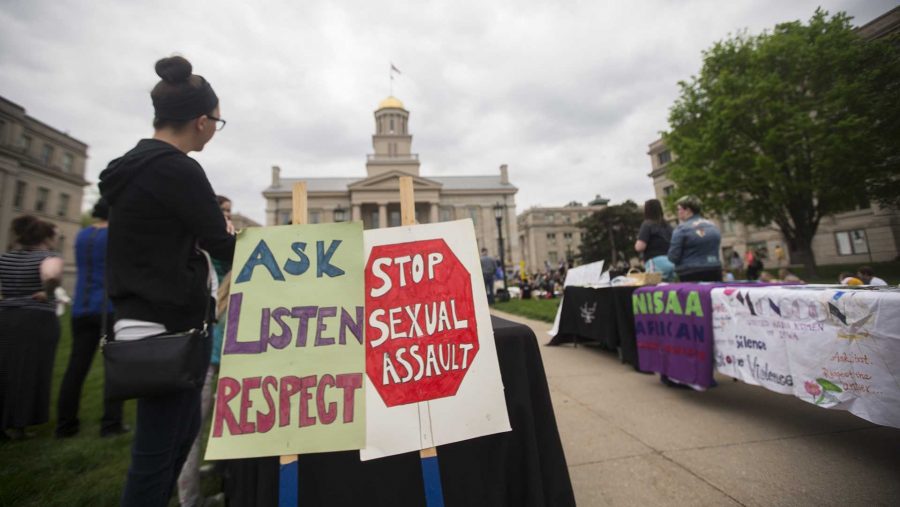 With demonstrations, rallies, and speakers on campus sparking controversy on college campuses across the nation, policies are in place that may affect students who choose to protest on campus.

Recently, the University of Wisconsin Board of Regents approved a policy outlining disciplinary actions that may be taken for students involved in protests.

Under the new policy, Wisconsin students can face disciplinary actions after being found responsible for disrupting others’ rights to expression.

The policy passed with one regent, Tony Evers, voting against it, saying the policy felt like a solution seeking a problem and it would chill and suppress free speech on campuses across Wisconsin.

“Legislating free-speech policies will not heal our wounds or bring about a better understanding of our differences,” Evers said in an email to The Daily Iowan.

“The University of Iowa values the First Amendment and freedom of expression,” Jeneane Beck, the UI assistant vice president for External Relations, said in an email to The Daily Iowan. “Civil discourse and the respectful exchange of ideas are the cornerstones of higher education and this great institution.”

RELATED: Free speech holds the day in the IMU

UI Associate Dean of Students Thomas Baker noted three provisions in the UI Code of Student Life that could apply to on-campus demonstrations: failure to comply with university directive, disruption of university activities, and demonstrations on university property.

Baker said in an event of civil disobedience, the UI’s first response would generally be asking the individuals involved to end the disruption.

Generally, charges are not given to the individuals if they comply with directions. If not, the form of protest, and the individual’s prior records, is taken into consideration when considering any consequences.

“My preference is to look at the case and the details of the case very carefully,” Baker said. “Then, depending upon the severity or lack of severity, assign a sanction that is an appropriate corrective measure as opposed to being a punitive measure.”

Policy involving using the Pentacrest is also in place, limiting the types of visual displays allowed without approval from the vice president for Student Life. The policy does not include distribution of leaflets or carrying of signs, which have been used numerous times during demonstrations held on campus.

UI President Bruce Harreld told the Iowa City Noon Rotary Club during his annual State of the University Address on Oct. 5 the institution is not immune to the national debate surrounding freedom of speech, but he believes the UI is handling it well.

“We will always stand behind the right to actually voice your opinions and have freedom of thought,” he said. “That’s what we teach, that’s what we practice, is that difference that we actually try to find in class … I think the line that we all need to figure out is how we do that in a way that still respects individual dignity and that doesn’t get into anybody’s space.”