Playing in their first tournament since mid-September, the Iowa women’s golf team will go up against the best this weekend in North Carolina. 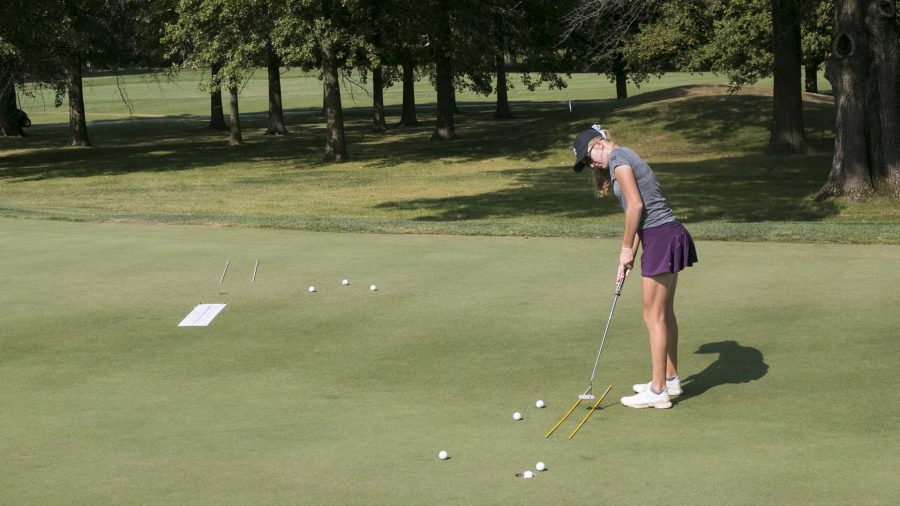 A member of the University of Iowa women’s golf team practices her putting on Thursday, Sept. 14, 2017.

The Iowa women’s golf team will head to Chapel Hill, North Carolina, this weekend for the Tar Heel Invitational to take on the tough competition.

The Hawkeyes will participate in their first tournament since Sept. 19, when they competed in the Mercedes Benz Invitational in Knoxville, Tennessee, in which they finished 12th out of 15 teams.

“It felt a little bit longer about a week ago,” head coach Megan Menzel said. “I really think this week, from an intensity standpoint, I feel like we’ve gotten some really good work and things are starting to come back together, so I feel pretty good about the length of the layoff.”

This is Iowa’s first appearance in the annual Tar Heel event.

The course, UNC-Finely, is regarded as one of the top-10 golf courses in the state of North Carolina.

“It’s a Fazio course,” Menzel said. “Looking at the pictures online and other coaches I’ve talked to, it’s decently open off the tee, and those are always well-bunkered courses. We’ll have to adjust chipping off Bermuda grass again, but I think once we get that figured out, we should be in pretty good shape.”

Senior Jessica Ip will be starting in the one spot for the Hawkeyes this weekend. Other members of the foursome will be senior Elisa Suarez and juniors Shawn Rennegarbe and Glesne. Freshman Stephanie Herzog, a native of Red Wing, Minnesota, will make her college début for Iowa.

“I think Stephanie can go out there and do good things in her first outing,” Menzel said. “She’s played a lot of golf this summer and has been competing the last six weeks on this roster.”

Though it was an extended period of time since their last tournament, the golfers believe the break was necessary. The Hawkeyes feel refreshed and are ready to go.

“I think [the break was] a good thing,” Glesne said. “Toward the end, it was hard going from tournament to tournament, and I felt like my game was a little off, but now, I’ve gotten a little time to work on things I needed to.”