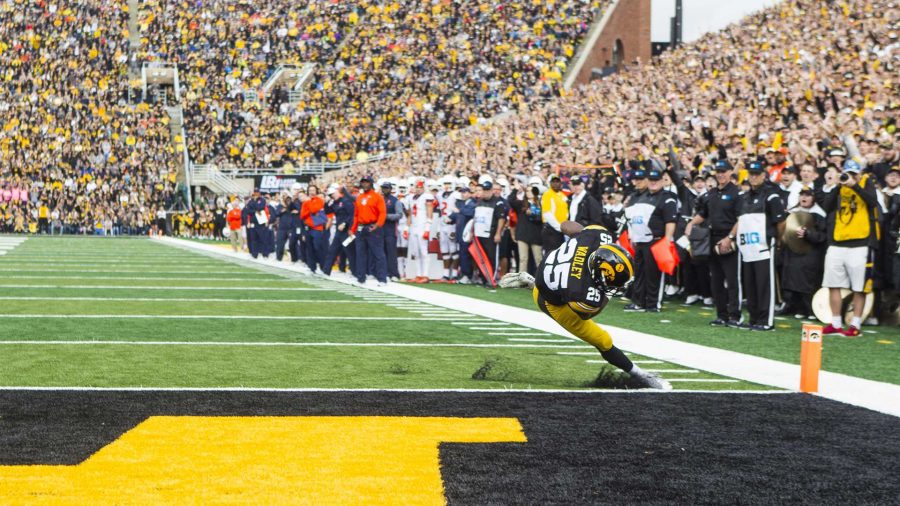 Iowa running back Akrum Wadley falls into the endzone during an NCAA football game between Iowa and Illinois in Kinnick Stadium on Saturday, Oct. 7, 2017. The Hawkeyes defeated the Fighting Illini, 45-16. (Joseph Cress/The Daily Iowan)

There are three things in life that are certain: death, taxes, and Akrum Wadley breaking a defender’s ankles.

Normally, I’d throw in Iowa’s running game into those certainties as well, but this year hasn’t been the case.

So, with the running game struggles so far this season, why an A-? Why not lower?

You can point fingers at different people for the issues on the ground. The offensive line has not played well this year, dealing with injuries and chemistry, which I think is a major reason for concern in a down year running the football.

“Unfortunately, our line has got to take the brunt of the criticism,” he said. “I think that starts with me.”

He referenced one play in particular at Iowa’s weekly press conference. Against Penn State, Iowa was backed up at its own 5-yard line. Ferentz called for a toss, and the Nittany Lions tackled Wadley in the backfield for a safety.

“I think about calling a gimmick play down there backed up against Penn State that cost us 2 points, probably changed the complexion of the game,” he said.

Nevertheless, we’re here to grade the position groups, not general areas like the running game or passing game.

I’m not saying there’s no blame on Hawkeyes’ running backs for the recent struggles, but aside from two games — in which defenders loaded the box and often made contact at or behind the line of scrimmage — the backs have looked good.

Wadley, James Butler (before his injury), Toren Young, and Ivory Kelly-Martin provide Iowa with a backfield rotation other teams could only hope for.

Aside from bruising ankles and egos, Wadley can do it all.

Look no further than when he turned nothing into something against Iowa State. The senior took a short dump-off pass on a crossing route and turned it into a 46-yard score with just over a minute remaining in regulation.

It was, and still is, a thing of beauty, a play that will go down in Hawkeye history.

Before Butler went down with injury against North Texas, he was off to his best game as a Hawkeye. He had 74 yards on 16 carries and came up with the hustle play of the year (the Mean Green recovered a Hawkeye fumble and it looked as though the defender would run untouched into the end zone, but Butler came from behind and forced a fumble, which he recovered, setting up Iowa with a new set of downs).

Butler is talented — he proved that in his days at Nevada — and once the Hawkeyes get him back, look for the running game to
pick up.

Meanwhile, the one-two punch of Young and Kelly-Martin displayed its prowess in the same game in which injuries knocked out Butler and Wadley. Iowa needed to run time off the clock, because North Texas’ offense could score quickly, using the air-raid scheme. The Hawkeyes turned to both backs.

They did not disappoint the coaches or the fans.

Young and Kelly-Martin combined for 152 yards and a pair of scores in the Iowa victory.

But that came in the nonconference play. Iowa struggled mightily to run the ball against Penn State and especially Michigan State, but for the first time all season, the Hawkeyes averaged 5 yards per carry in their win against Illinois.