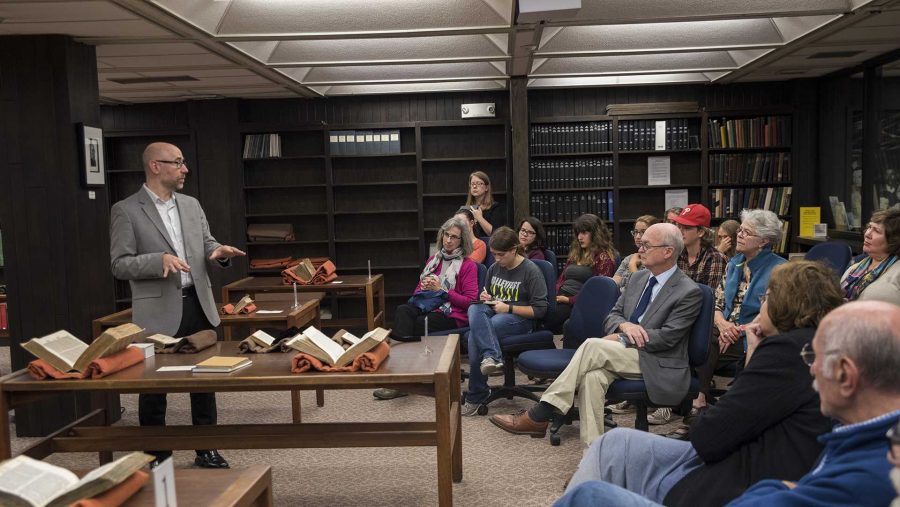 The University of Iowa’s Reformation Era book collection is not the most comprehensive in the world, but with the 500th anniversary of the Reformation’s beginning on Oct. 31, UI bibliophiles are diving in.

On Oct. 11, Raymond Mentzer and Head of Special Collections Greg Pickman presented on books and the Reformation at this month’s Iowa Bibliophiles meeting.

The main focus of the meeting was different books from the time period of the Reformation the university had collected. Some have made the library their home for many years, while others have been bought by the library or donated by collectors.

“I was surprised, I didn’t know the library’s collection was this extensive,” Mentzer said. Mentzer teaches religious studies at the university, and gave a rundown of the Reformation during the meeting.

Originally written in Latin, Martin Luther’s 95 theses were actually intended for academic debate, not religious revolution, Mentzer said. The debate ended up never actually happening, since someone found Luther’s theses, translated them into German, and distributed them. This turned Luther into a folk hero and eventually led to the creation of the Protestant arm of Christianity.

The books in this collection range from the late 1400s to the mid-1700s, and include Bibles, Luther’s works, and pieces that both praise and condemn Luther and his movement. There are even works that have nothing to do with Luther, but were written in the time of the Reformation, which gives people insight to what ordinary books were like in that time.

“Some of these are very interesting pieces, some of them are very ordinary pieces, so this isn’t necessarily the most spectacular Reformation Era material that’s out there … but I think with any luck you’ll kind of have a sense of what this material looked like and what was circulating at the time,” Pickman said.

There was also a huge shift in how works were printed and circulated in the early 1500s, which adds further importance to this era. Before this shift, books were printed on large sheets of paper, which made huge, thick books, Pickman said. Then printers started to turn out what could almost be called pamphlets. They were small and thin, and turned into a form of communication for many people.

“These books are particularly important because they represent a huge shift in the way people thought about the world,” Isabella Myers said. “Without proper care and attention … they could just be lost.”

Myers is a second-year M.F.A. candidate at the Center for the Book and works in the Conservation Center in the UI Main Library. She noted how many of the books from the 14-1500s on display were in amazing condition, especially compared to the one book published in the 1700s. Earlier books were printed on hardier materials like cotton rag, which allowed them to age better and be less fragile, unlike books printed on more modern materials.

Although the anniversary of this renowned time period may not be well-known, people are still fascinated in learning more, Mentzer said.