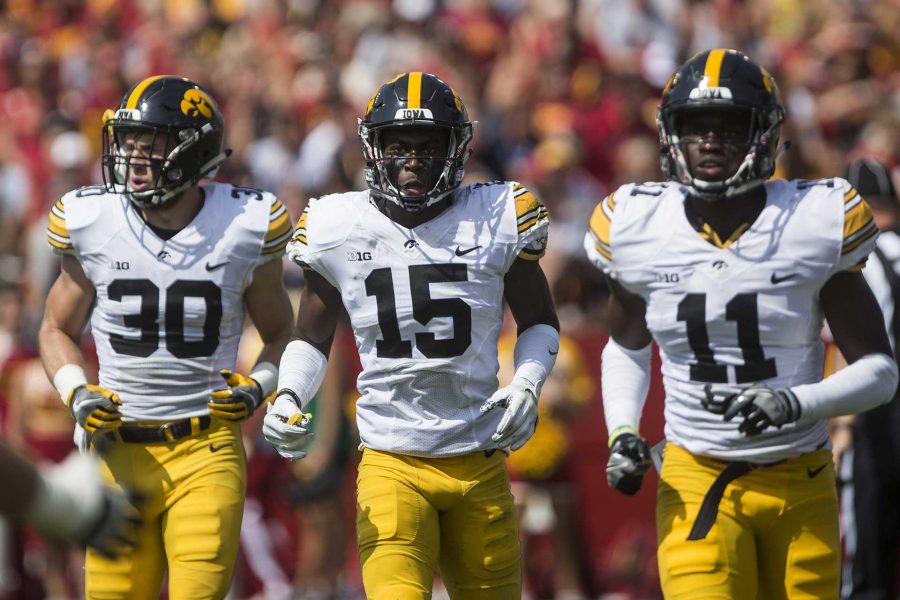 If Iowa played Illinois each week, each position group would be given an A+.

The secondary, while the Illini moved on it, did not break. In fact, the defensive backs came up with timely turnovers and looked solid for most of the game.

I’m hesitant to hand out a B to the secondary for two reasons, however:

1) It’s Illinois. Michigan State worked Iowa’s defense through the air for two-straight drives, building up a 14-0 advantage before Iowa could even blink.

2) Brandon Snyder has only played one game. I think we’d have an adequate grasp on just how good Iowa’s cornerbacks and safeties were if there wasn’t as much shuffling in the secondary.

Snyder returned after a torn ACL, but Jake Gervase, Amani Hooker, and Myles Taylor all have played their fair share of safety duties.

Aside from cornerback Josh Jackson, the only true consistent defender out of all the defensive backs, Manny Rugamba has faced injury and suspension, and Michael Ojemudia has been inconsistent while filling in for him.

There’s something to be said about players meshing, specifically in their respective position groups. Defensive coordinator Phil Parker might just get that sort of consistency after the bye week.

Jackson is a lock for a starting corner. Snyder won’t lose his free-safety spot, barring injury or an unexpected meltdown. Hooker, Parker said, will be the starting strong safety. That leaves the defender opposite Jackson (either Rugamba or Ojemudia).

“He’s a very sharp kid football-wise, so I don’t think not being on the field mentally is going to bother him,” he said. “Him getting that thing better where he needs to be able to run and cover guys.”

Even when he was on the field, however, Rugamba didn’t provide the spark he did against Michigan in what many tabbed as his break-out game last
season. Against Iowa State, Rugamba (and in all fairness, the entire secondary) had a tough time covering the Cyclones’ offense.

Jacob Park torched Iowa’s defense, tossing 4 touchdowns in a 347-yard performance (for those who haven’t kept up with the legend of Jacob Park, he reportedly took a leave of absence from the Iowa State football team).

However, in Iowa’s opening game against Wyoming, Cowboy quarterback Josh Allen, who many hail as one of — if not the — top quarterback prospects in the upcoming NFL draft,
struggled facing the Hawkeye secondary.

Allen completed a pedestrian 57-percent of his passes, never really finding any rhythm.

Jackson snagged his first interception of the season on an Allen pass and returned it 41 yards before being taken down by a Wyoming player. Also in that game, Allen heaved a deep shot to the end zone, but Jackson had great position, breaking up the pass, a preview of what Hawkeye fans could expect from him. Snyder’s impact in his season début was pretty evident, but I’d argue that Hooker has been a bigger surprise.

He saw his playing time increase after Gervase found his way to the bench after taking a poor tackling angle against North Texas. The sophomore hasn’t made any major mistakes since taking over, and his 6-tackle, 1-interception performance in Iowa’s Homecoming win solidified his role.

Iowa’s defensive back group could be one of its strong points if a consistent starting four can be established.