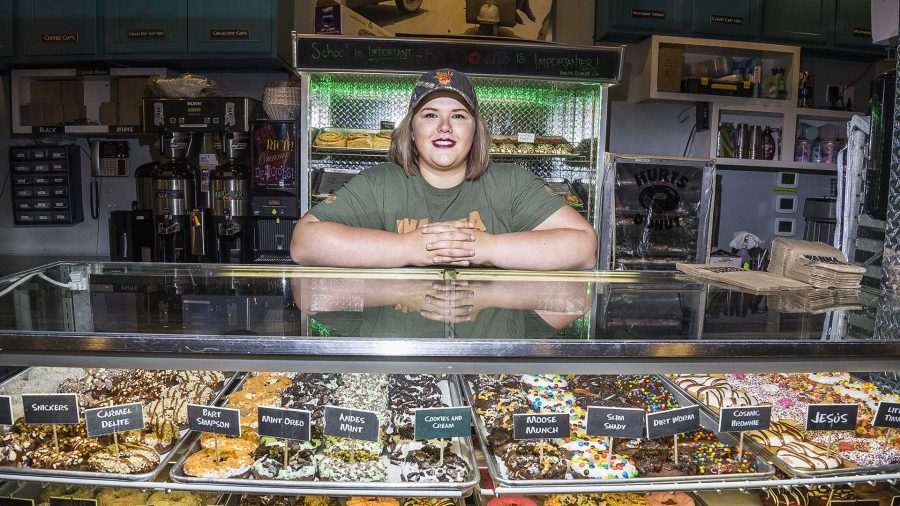 As Halloween approaches, Hurts Donut Co., located at 1301 Fifth St., Coralville, is taking advantage of the season to add a little different element to its business, one that you may or may not welcome at your front door.

Three years ago, Hurts came up with the idea of allowing customers to order doughnuts for people and have them delivered by clowns around Halloween. This year, the clown deliveries have taken off.

Tyler Howard, a Hurts co-owner, said the clown deliveries have been more successful this year than in previous years. He thinks is because of the growth in the company and because the word is getting around about the things the company does.

Howard said he was a little surprised by the success and was “really excited about the reactions they got from everyone.”

Employees get to volunteer to be the clowns if they are interested in doing the deliveries. Howard said they hoping to let everyone who wants to be a clown get the chance to by the end of the season.

The company does not train its clowns, but it does lay down some basic standards for the clowns, starting when they begin a delivery until they leave. These standards include being able to read how the customer feels about the clown.

“If they seem too scared, the clown should take it easy, but if they are not afraid, then they can be more outgoing and show more of a clown personality,” Howard said.

Kyle Howard, Tyler Howard’s brother who has played the role of the clown, defined being one as “a definitely fun experience.”

When he played the role of the clown, he didn’t talk but stood there with the doughnuts and a red balloon while doing a “creepy clown laugh.” He said he felt this was creepy enough without talking.

He said when he was delivering, there were different reactions across the board.

“Some were excited, some were surprised, and some took off running,” he said. “But when they found out what was going on, they thought it was a fun thing.”

Tyler Howard said there were some people who were hesitant to take the doughnuts, but other people made sure they got them.

Kyle Howard said there have been no bad experiences during the deliveries.

UI student Matt Fuelberth put in his two cents on clown deliveries. While he has not received one, he said, if a clown showed up on his front porch, he would probably call the police.

“I would still accept the doughnuts, because I’m always in the mood for a doughnut,” he said.

While the idea has been successful, Tyler Howard said, Hurts does not want to oversaturate. but it wants to keep the clowns as something that gets people to want to come back and get on the list.