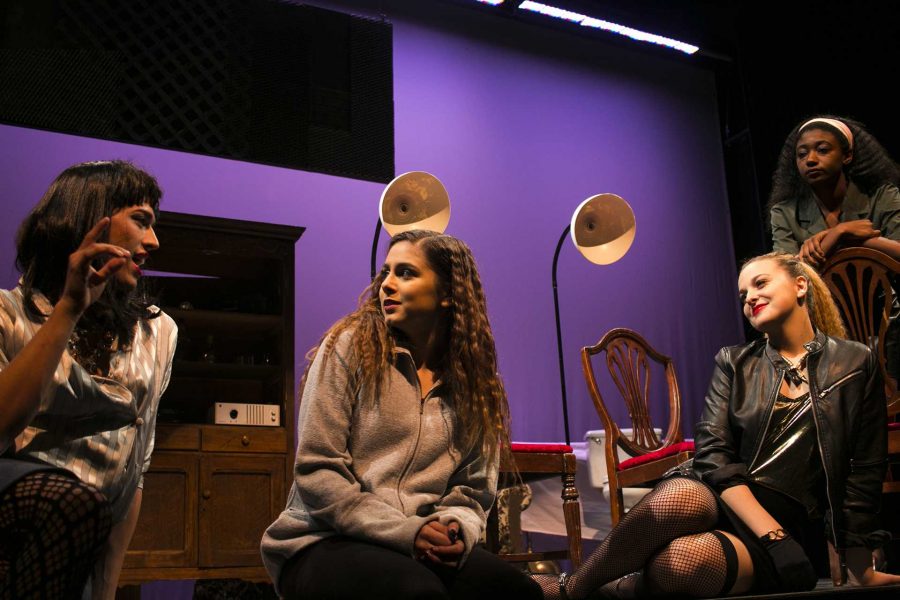 Actors perform during a dress rehersal for Starfire in Theatre B in the Theater Building on Wednesday, Oct. 11, 2017. Starfire is free to attend for UI students, and $5 for the general public. (Joseph Cress/The Daily Iowan)

Imagine a play combining sexuality, feminism, gender, and the ’80s — that’s Starfire. The University of Iowa Theater Department this evening will lift the curtain on the production, an original work by UI student Taylor Claman.

The play, which deals with mature topics and adult themes, will run through Oct. 15 in the Theater Building’s Theater B.

The play focuses on Gloria, who deals with the confusing swirl of the ’80s, a time in which everything seems trickle down: pop culture, politics, gender roles, and, of course, relationships.

Claman said the play will feature a variety of mature themes, among them prostitution, violence, and drugs. The play is a deeper look into the inner workings of emotionally abusive relationships, she said, noting that victims sometimes throw themselves further into the system that they’re trying to escape.

The script has gone through numerous drafts, and the cast and crew have worked tirelessly on it, fixing sometimes awkward dialogue and developing the characters to make them feel as real as possible. With only nine characters, each was designed to not only feel like real people, but also to represent different aspects of the feminist-sexual movement.

Chastity Williams, who plays Phoebe/Syphilis, said in an email to The Daily Iowan that the production has taught her “how to bring your character to life using background stories and extremes.”

She believes that the play is an especially important for audiences to experience because of its content.

“It definitely opens the eyes of the watcher and make them define what’s really good and what’s evil.” Williams said.

Because of the themes and events, the play may not be suitable for those under the age of 17.

The dark, and intense world of Starfire that deals with many mature and extreme topics and should be an eye-opening experience for audiences.
THEATER