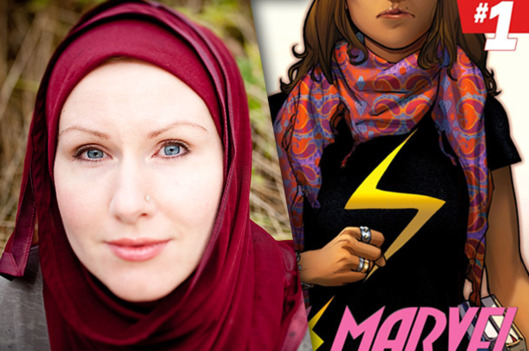 Five years ago, Wilson received a phone call from two editors at Marvel who wanted to see if she was interested in writing her own comic series.

“To me it sounds like a crazy proposition,” she said. “My first thought was to tell them to hire an intern just to open all of the hate mail that we were going to get.”

Otherwise, building a superhero from the ground up was harder than she had expected, she said. They had to think of who she was and what her story was.

“It was the trifecta of death: new characters, female characters, and minority characters don’t sell, but this project would contain all three of those things in a nice, pretty package,” Wilson said.

They pondered the thought of a model Muslim girl who does what she’s supposed to do, faces no racism, and lives a fairly standard life. However, Wilson said, she believed the people who needed the story would require a character who faces real experiences, isn’t always sure, asks questions, and makes mistakes, but laughs at herself. Wilson wanted her superhero to have a life closer to an average teenage experience, she said.

When discussing powers, Wilson wanted her to be more than just a “pretty” character. She didn’t want the superhero to be able to fly or be telepathic, because, she said, she believes they’re “too easy.” She was surprised to note that the power sets that were left over were deeply connected to violence.

Normal and standard power sets connect to violence, and if related to Muslim characters, the comic would have political significance, Wilson said.

“Are we allowed to get at the root of what it means to be a superhero with this character?” Wilson asked.

She was inspired to create a satirical story similar to “Kickass” that would spark political commentary, but Amanat ultimately vetoed the idea.

Amanat wanted Wilson to think about the “deeper essence of superheroes, Wilson said. What it is in most primal form? Why do we respond to them?”

While discussing ideas, the Boston Marathon bombing occurred, so Wilson said she decided it was not the time to be ironic.

The outcome of Wilson’s superhero was a 16-year-old Pakistani-American teenage girl from New Jersey, Kamala Khan, popularly known as “Ms. Marvel.” Wilson said she decided to make her a polymorph, which allows her to grow and shrink.

The power is “not violent but adaptive, unexpected, bot classically feminine, fun, kinetic, and has to think and rethink in every new challenge how she uses those powers to solve whatever problem she faces,” Wilson said.

Khan also possess a healing factor, with which she can heal and regenerate herself, but she can only do so in her “true form,” Wilson said.

Unlike dark and grim superhero reboots, Wilson said, she believes Khan’s intact family is the rarest quality. No one in her family is murdered or kidnapped.
RELATED: The color of identity for Muslims
“The superhero has nothing to do with revenge; the only reason she could have possibly been given powers is to help others,” Wilson said.

Including the trifecta of death, Wilson believes Khan’s powers was the riskiest decision, because the motivations being sinister, so people might have complained that they were “too cute” and “roll eyes and pick up Batman again, and that would be that.”

The team made careful strategic decisions to try to ensure that readers would not be offended. Khan is simply “a younger millennial with all of the anxieties that come with that,” Wilson said.

Before releasing the series, she said, she was prepared for failure and ridicule, but the first, second, and third anthologies were New York Times bestselling graphic books, and the first anthology was the bestselling digital edition of anything *Marvel has ever published, Wilson stated.

She is grateful for audience that embraced the series, she said.

“I read Ms. Marvel in class, and I liked learning about the process of comic writing,” said audience member Jocelyn Roof. “I mainly write fiction, so I liked gaining a different artist’s perspective.”

Roof said she thought Willow’s panel was important because it shone a light on a female Muslim author’s work, which helps create an inclusion of different aspects of lives.